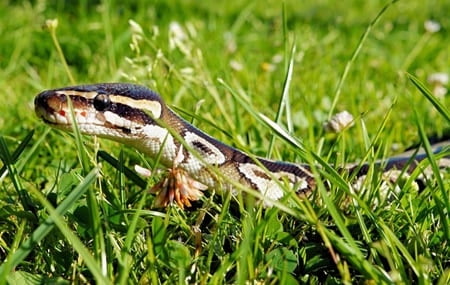 Ball pythons (python regius) are the most popular pet snake due to their non-hostile disposition. Although they’re rarely aggressive, some can have temperamental problems. Biting is most common with baby ball pythons that haven’t learned that they can trust their owners yet.

Ball python bites aren’t dangerous, venomous, or painful. While a ball python’s teeth can be quite sharp, its jaws aren’t strong enough to cause significant damage to your skin. A bite feels like a few quick needle pricks. Just wash and sterilize the area to kill any bacteria.

Ball python bites can be quick and unexpected, so they’re more panic-inducing than harmful. If a ball python does bite you, stay calm and try not to yank it away. Ball pythons have jagged, backward-facing teeth, so pulling the snake off you will only cause further damage to your skin.

How Bad Are Ball Python Bites?

Humans often feel anxious about the thought of being bitten by a snake. Their bites are thought to be incredibly painful or even deadly. However, a ball python’s bite is not venomous (poisonous).

Pain from a ball python bite varies based on the situation and the person being bitten. If you’ve never been bitten by a snake, the chances are the panic caused by the bite will make the experience ‘seem’ more painful than it actually is in reality.

If you’ve handled fussy snakes before and have been bitten previously, a ball python bite will just feel like a few needle pricks. Just your hands thoroughly with soap and water and apply an antiseptic cream.

Don’t Just Pull a Ball Python Off You

Ball python teeth are small, sharp, and barb-like. They are all angled backwards to enable them to latch onto their prey during striking and constricting.

This gives them a much firmer grip, preventing the prey from escaping. Moreover, the backward-facing teeth allow the snake to readily swallow and digest its meal as soon as it kills it.

Ball pythons have around 25-35 small teeth that are thin and sharp like hypodermic needles. Hence, they cause very little pain.

However, pulling the snake forcibly when it bites you can break your snake’s teeth and cause further damage to your skin.

Although they will grow back again, a ball python’s teeth are tiny and fragile so they can break easily. A broken tooth can damage your snake’s mouth, requiring veterinary care. In some cases, damage to the mouth can lead to infections, such as mouth rot (infectious stomatitis).

If your snake’s teeth don’t break, ‘yanking’ it away will definitely tear your skin. Imagine a ball python’s teeth as tiny hooks that point towards its tail. If you pull the snake by the tail, the tiny hooks will lacerate your skin.

Does It Hurt When a Ball Python Bites You?

A python’s bite differs based on the circumstances, which may include defensive bites and prey bites, according to the journal, Nature.

Snakes nip faster than humans can react. According to The Royal Society, a snake can lunge forward from a coiled position by about half a feet in 70 milliseconds. On average, a human eyeblink spans 200 milliseconds.

Mammals take anywhere around 60 to 395 milliseconds to react and make a noticeable movement, depending on the species. Therefore, with a snake’s high striking speed, humans don’t stand much of a chance.

In such a scenario, the snake isn’t intent on capturing or eating the animal it is attacking. A ball python that bites you defensively will barely nip you and release your skin immediately. Therefore, a defensive bite will likely feel like a few pinpricks and will hurt less than an insect sting.

However, the initial surprise from your snake’s attack may cause you more panic. Panic can exacerbate pain. So, try to stay calm.

Keep in mind that almost all ball pythons hatch a little nippy and calm down once they start to get used to their owners. Trust must be established. Snakes will learn that your scent isn’t associated with danger.

It’s not common for snakes to bite unexpectedly, especially when they’re hungry. Keep in mind that ball pythons have poor vision and rely heavily on their sense of smell and the infrared sensing pits on their face. In other words, they detect warm-blooded prey from the heat released from their bodies and, of course, their smell.

Snakes make mistakes with smells and prey when something warm is present. Therefore, if you haven’t washed your hands after handling your snake’s prey, the danger is that it will bite you. Such basic mistakes are always made by the owner and are thus, avoidable.

While a defensive bite is quick and virtually painless, a hungry bite from a ball python can be painful. Moreover, if your snake mistakes your hand for its meal, it will drive its teeth deeper, wrap around your arm, and constrict. Just remember not to pull away.

Ball pythons are constrictor snakes with instincts designed to keep them safe from predation using their sharp teeth and claws. If the prey moves around too much, it will dig its teeth deeper and constrict tighter to immobilize its prey more effectively. If the prey stops moving, the snake will loosen its grip and let go.

Be patient and try to keep your arm still. The snake will soon realize its error and loosen its grip. Just pull its teeth away carefully.

Even accidental bites aren’t very painful, but they can hurt more when the snake squeezes down and drives its teeth deeper. To avoid painful feeding bites from ball pythons, you should always:

Ball pythons have different personalities and temperaments. Some are more irritable and prone to biting. Ball pythons are more likely to be stressed if they’re shedding, have an enclosure that’s too small/large, are being handled excessively, or they’re feeling hungry.

Stress biting can also be caused by an underlying illness. If you suspect your ball python is unwell, take it to a herp vet for a diagnosis.

Ball pythons are considered to be the calmest and friendliest pet snakes for novice owners. However, if your ball python is very nippy, it’s good to know that its bite is not dangerous and won’t cause you any harm.