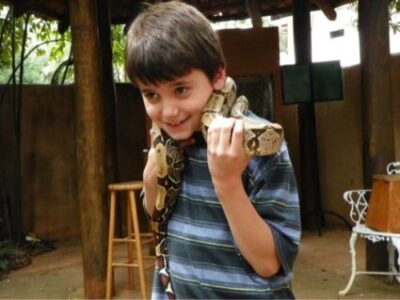 Boas have a reputation as a dangerous animal. You might wonder, if you choose to keep a boa constrictor as a pet, will it hurt you?

Boa constrictors can be safe pets. While they are large and strong, they are not deadly snakes. Boas do not eat humans, but there are many incidents of them biting humans. Do not allow a child to handle a boa constrictor, especially unsupervised, as they can mishandle a boa and be accidentally strangled. A boa is not a beginner snake.

Boas are neither affectionate nor aggressive. In a report from the Chicago Herpetological Society, researchers explain that there are no verified accounts of a boa constrictor fatally attacking any human of any age or size. These snakes do not eat humans, and won’t attack you.

If you are afraid of boa constrictors, you are not alone. Lots of people believe that boas are inherently dangerous snakes. The truth is that boa constrictors can, in fact, be safely kept as pets.

There are many popular myths about boa constrictors. Let’s take a moment to clear up a couple of misconceptions about boas.

To be clear, scientists do not consider boa constrictors to be a giant snake species at all. Instead, boa constrictors are on the small end of medium-sized snakes. Adult boas can range from 6 to 14 feet in length.

The Journal of Herpetology reports that adult female boa constrictors are around 14% longer than the males and 51% bigger, but this does not make them a huge snake. It is normal for an adult boa constrictor to reach about 13 feet by the time it is 30 years old.

It is possible that this exaggeration of the size of a boa constrictor comes from people misidentifying other giant snakes, such as pythons and anacondas, as “boa constrictors.”

The name “constrictor” indicates that these snakes have a deadly grip. It has been commonly believed that this grip allows the snake to render its prey unable to breathe. According to myth, constrictor snakes give their prey a slow, agonizing death.

However, when boas coil around a caught rat, they do not cut off the rat’s ability to breathe. Instead, they block the rat’s blood flow, effectively giving the rat a heart attack. This allows the snake to more quickly subdue its prey, protecting the rat from being clawed or bitten. Suffocation would be a much longer process than this.

The snake also will use its teeth to bite the prey’s head in an attempt to quickly subdue it, rather than waiting for it to suffocate. Boa constrictors are not cruel. They are just looking for a meal.

When Is a Boa Constrictor Unsafe?

Of course, there are incidents in which a boa causes harm to a human. Just like any snake, pet boa constrictors sometimes bite their human owners.

Arch Ophthalmol reports on one such incident in which a pet boa constrictor bit its owner on the eye. The snake was ill from a bacterial infection of its mouth, and became aggressive while its owner was bathing it. The snake refused to release its bite and then tried to wrap itself around the owner’s neck.

Responders killed the snake, and after minor surgery, the human recovered most of his sight. Boa constrictors are not venomous, and his eye was not injured beyond repair. The wound didn’t even get infected.

While around 50,000 Americans are bitten by a snake every year, snake bites to the eye are extremely rare. This makes this incident rather unusual.

Why Did This Incident Occur?

There are several factors that could have contributed to this snake’s sudden aggressive behavior. The bacterial infection the snake had is a common one, infectious stomatitis, which is caused by environmental stress.

The snake may have been kept in poor conditions for a while, and it is likely that it was not properly socialized or prepared for handling as well. This moment of being handled in the bath when it was not used to such treatment, combined with its discomfort from the disease, pushed it over the edge.

Properly socializing your boa constrictor and making sure it gets the right care when it is sick can prevent incidents like this from happening at all.

Be Cautious with Children and Boa Constrictors

Large snakes, even tame ones, are not a good pet for small children. Children are not likely to know how to properly handle a boa constrictor, and a snake that feels threatened is more likely to bite. Given how big and strong an adult boa constrictor is, it could easily overpower a child.

Additionally, even though boa constrictors do not suffocate their prey, their coils are still potentially dangerous. Boa constrictors can constrict due to being frightened or startled. If one of these snakes coils around a young child’s neck during playtime and constricts, it could strangle or otherwise seriously injure the child.

How Should You Handle a Boa Constrictor?

Here are some safety guidelines for handling a boa constrictor.

If your snake starts to constrict around you, do not pull at the snake’s middle. The snake will become alarmed and tighten its grip. Instead, slowly but firmly unwind the snake, starting from its tail. It will let go. With caution and care, a boa constrictor can be a safe pet for you.