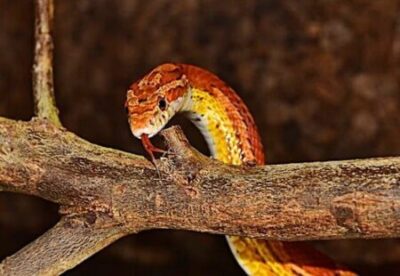 A bite from a corn snake hurts, so you want the most placid snake possible. That’s why you need to know if male or female corn snakes are more aggressive, or if it’s just down to the temperament of the snake.

Neither male nor female corn snakes are more aggressive. Two males in the same cage will fight for dominance, while two females can be kept together. Males tend to get aggressive when they mate, and females can become defensive after they’ve laid eggs. So, personality and temperament determine if a snake is more likely to bite you.

If a corn snake is treated well, then it will be far less aggressive towards you because you won’t be seen as a danger or threat. We’ll look at what affects temperament, and when male or female corn snakes can get aggressive.

Owners are divided on whether male or female snakes are more aggressive, so there’s unlikely to be much of a difference.

Most owners say that they’re the same, and that whether a snake is aggressive depends on the snake’s personality, not its sex. But a small minority of owners say females bite more frequently than males.

If you owned a male and female in separate enclosures, there may be a difference between the pair. But this difference is due to personality, not biological sex. If you kept hundreds of snakes, you would not notice a particular pattern with one sex being more aggressive than the other.

The reason for this is that captive-bred snakes grow up around people. They learn that their owners aren’t threatening, provided they handle and care for their snakes correctly.

Wild-caught snakes didn’t receive any socialization, so view their owners as threats. There are three other causes of aggression in snakes:

The reason for this disconnect is that snakes aren’t as intelligent as other kinds of pets. According to Current Biology, reptiles in many ways have less developed brains than mammals. They also lack the instinctual social skills that other animals have.

Corn snakes aren’t as aggressive when handled. If done correctly, they will tolerate being picked up and handled very well.

Whether a snake will be aggressive or nervous when you pick it up depends on its temperament rather than its sex.

If you have owned your corn snake since it was a juvenile, it will likely be used to you by now. If it is, then it should behave well when picked up.

A corn snake won’t enjoy handling like other pets, because reptiles can’t build bonds with owners, but it won’t react negatively.

A large corn snake will feel more comfortable attacking, because it is more capable of defending itself. If you did something it didn’t like, it may act more aggressively, e.g. by displaying cage aggression.

But a smaller snake may feel more threatened because of how large you, the owner, are by comparison. When you pick it up, it may try to get away from you. It may bite when you’re handling it.

According to Animal Behavior, female corns are larger than males. But unlike other species, there isn’t a significant size difference.

So, in other species, the size of a snake may make one sex more aggressive than the other, but not in corn snakes.

Both male and female corn snakes are territorial. Corn snakes don’t live in social groups, but alone. Each wild corn snake has its own territory, where it has access to water, food, shelter, and nearby potential mates.

Females and males alike need to secure their territories. According to PLoS One, snakes can lay claim to territory without the need for fighting. It’s only if they’re kept in close proximity that this becomes an issue.

You will see this in action if you house more than one corn snake in the same enclosure. But if you house your snake alone, this isn’t even relevant.

Snakes of any sex which live in the same small enclosure will invariably fight. That’s because they’ve been put together in close quarters, and feel that they have to fight over territory and food.

If you throw food into a tank with two snakes, they will fight over it. The two are in direct competition, and only the winner gets to eat.

The two snakes can kill one another, especially if one is smaller than the other. Many snake species will eat other snakes, although corn snakes don’t. A snake that eats other snakes is known as an ophiophagic snake.

Two male snakes, though, will immediately start to fight (so should never be housed together). Males fight over mates, as well as territory and food.

A male and a female corn snake living together will also fight, and any snake living with another snake will also be more aggressive towards you. That’s because of how stressed the snake is, having to share its territory.

The only time that you’ll notice male corn snakes being more aggressive is during their mating season.

Aggression relates to how males compete to breed. To understand why, you have to understand how corn snakes attract and win mates.

You may also notice that females are more aggressive after they lay their eggs. Females are nervous when you touch or take their eggs.

During mating season (the spring), females will give off pheromones. These attract any potential male mates nearby. If there is more than one male that seeks out the female’s scent, the two will compete.

Both males want to mate with the female. But only the strongest will get to do so. This, coincidentally, is what the term ‘survival of the fittest’: the animal which can best survive in its environment and win mates will be the one that gets to breed.

When they compete, the two males will wrestle. They will each try to pin the other. Neither will bite the other, because this is counterproductive, and may mean that one or both die. Instead, the one that wins the wrestling match is deemed stronger.

However, you won’t notice this behavior in captivity unless you are actively trying to breed corn snakes. That’s because:

In no other circumstance will you notice that males are more aggressive.

Female corn snakes don’t protect their eggs like other species.

However, if you reach in to take the female’s eggs soon after she’s laid them, you may notice aggression. This is because she has only just laid them, and because she’s in a vulnerable state after having laid the eggs.

Males, by contrast, don’t wait around to see their eggs laid or hatched. Once mating is over, the male leaves almost immediately.

If you want a corn snake that isn’t aggressive, the sex of the snake is irrelevant. Observe the snake and ask to handle it before you buy it. This will tell you whether it’s likely to hiss at you or bite a lot.