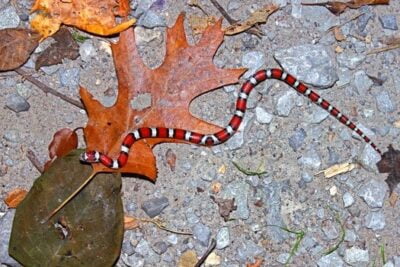 The milk snake is a visually stunning species of the Lampropeltis genus. The distinct banding and vivid colors make milk snakes stand out. This has led to the unnecessary demise of many milk snakes. These harmless snakes were mistaken for the highly venomous, yet docile, coral snake.

Milk snakes are non-venomous, have no fangs, and kill their prey via constriction. Still, many people question why milk snakes have evolved near-identical colorings and patterns to coral snakes. The answer is self-defense. Potential predators of wild milk snakes have the same reaction humans do when they mistake a milk snake for a coral snake: fear. This is intentional. Batesian mimicry is when a non-venomous snake adopts a similar appearance to a venomous snake.

Milk snakes (Lampropeltis triangulum) as a species can be found in several locations, including most of the U.S. There are 25 known subspecies of milk snake. Adults range anywhere between 1 and 5 feet in size. Most milk snakes boast the typical red, white, and black banding. However, there is color and pattern variation amidst the subspecies.

A snake that feels threatened will want to hide. If given no choice, it will defend itself. Milk snakes will act defensively when placed in this situation. They will strike, hiss, and musk. A milk snake’s first line of defense, though, is its appearance.

In nature, bright colors usually mean danger. This is seen best in poison dart frogs. Naturally, some snakes follow this principle, thus the coral snake’s impactful appearance. Evolution allowed the milk snake to mimic the appearance of the coral snake as a defense mechanism. This process is called Batesian mimicry.

Evolution describes Batesian mimicry is when a harmless species mimics the warning coloration of a dangerous species. As a defense mechanism, this discourages the mimicker’s natural predators from attacking it. It can be seen in multiple animal species. Here are some common examples:

Why Are They Called Milk Snakes?

The milk snake earned its name due to superstition. Old World folk tales whispered of snakes sneaking into barns at night to drink milk from cows. The Journal of Integrative Biology explains that milk snakes may have earned this name, and the blame for poor milk production, by being in the right place at the wrong time.

Rodents are attracted to barns. They are shelters from the cold and full of easily-thieved food. Naturally, consistent prey populations attracted milk snakes. Farmers that saw these snakes slithering through their barns during periods of poor milk production may have chosen the milk snake as a culprit. Thus, the myth, and name of the milk snake, was born.

Milk snakes are part of the larger kingsnake family. They are Ophiophagus, meaning that they eat snakes. By definition, this also means that milk snakes are cannibals.

Outside of the breeding season, milk snakes will attempt to subdue and eat any snake that crosses its path. This includes smaller milk snakes.

A study in the Journal of Herpetology found that only infrequently would milk snakes practice cannibalistic behavior. Instead, the larger portion of their diet consisted of small mammals and lizards.

There is a common rhyme for telling milk snakes apart from coral snakes. “Red on yellow kills a fellow. Red on black, friend of Jack.” While catchy, this rhyme doesn’t hold true all of the time.

Milk snakes have diverged into multiple subspecies, each with its own quirks and traits. Colors and patterns vary across each subspecies. This makes accurate identification tricky without close examination.

The following markers help distinguish milk snakes from coral snakes and copperheads. These rules are not 100% accurate. It is always advised to leave wild snakes alone, especially if you cannot identify them.

If you encounter a snake in the wild or in your backyard, it is best to ask an expert to remove it. Snake catchers will identify if a snake is dangerous and have the equipment to safely capture and relocate the snake.

As milk snakes are non-venomous, they do not have fangs. A bite may not hurt at all, or even break the skin. While these snakes may look similar to the deadly coral snake, milk snakes are actually one of the most harmless snakes known. Milk snakes are not at all dangerous.