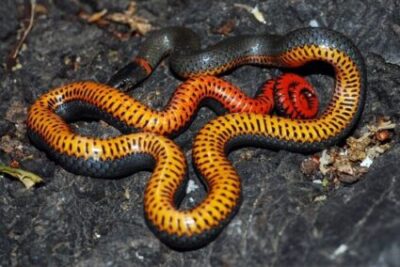 While ringneck snakes do have a mild venom in their saliva, this is not potent enough to kill a human. These timid snakes rarely bite unless they are subduing their prey. Venom helps to slow down prey and digest meals. If threatened, a ringneck snake is much more likely to coil up and show its brightly-colored scales than to bite its attacker.

Ringneck snakes are commonly found across North America. They are very small and shy and, as a consequence, are rarely seen by humans. This gives these snakes a bit of a mysterious reputation, causing many of us to wonder if they are poisonous or harmful to humans in some little-known way.

Are Ringneck Snakes Dangerous To Humans?

While ringneck snakes use a mild salivary venom to help them slow down and digest their prey, they pose no threat to humans. Ringneck snakes hardly ever bite humans as a threat.

Ringneck snakes are usually a grayish color on most of their body. These dorsal scales can also range between shades of black, tan, or blue instead. Ringneck snakes also have a bright yellow or orange band around the back of their neck.

This band is where they get their “ringneck” name, because it looks like the snake has a ring around its neck. The snake’s belly is also a bright yellow or orange color, just like the ring on its neck.

Ringneck snakes have smooth scales and round pupils. Females are usually larger, with a proportionately shorter tail than males. Hatchlings have very similar colors to adult snakes.

Where Do Ringneck Snakes Live?

Ringneck snakes have one of the largest geographic ranges of any North American snake species. You will find ringneck snakes in the wild throughout the eastern United States, from the southernmost part of Canada all the way to Florida.

They spread out across the deserts in the southwest and most of the Pacific cost as well. Ringneck snakes are populous in Georgia and South Carolina.

These snakes are common in moist areas, such as river floodplains, the edges of wetlands, and moist hardwood forests. In mountainous areas, ringnecks take shelter under rocks in this more open habitat.

Many sources will list ringneck snakes as nonvenomous, since their venom does not have any significant harmful effects for humans. However, the Savannah River Ecology Laboratory at the University of Georgia reports that ringneck snakes have a weak venom in their saliva.

Again, this venom isn’t harmful to humans. However, it is just the right amount of venom to allow the ringneck snake to slow down its prey. Ringneck snakes feed on small animals, such as lizards, amphibians, other small snakes, and a wide variety of invertebrates such as earthworms.

Another way that the ringneck snake’s venom helps it out is with digestion. In humans, saliva helps us start to break down the food in our mouths to make it easier to swallow. In many snakes, venom is used as a tool for digestion, a sort of super saliva that breaks down the snake’s food even more. A ringneck snake’s venom starts to digest the snake’s prey even before it swallows the smaller animal.

Given how mild their venom is and how non-aggressive ringneck snakes tend to behave, it is believed that ringneck snake venom is not a tool for defense. These snakes do not usually bite their predators, only using venom on their prey.

What Teeth Do Ringneck Snakes Have?

Most subspecies of ringneck snakes have fangs near the back of their mouth, rather than the front. This kind of teeth structure is called opisthoglyphous teeth. The fangs in the back are grooved. These fangs are what the ringneck snake uses to channel its mild venom into its prey.

This means that the snake needs to move its prey all the way to the back of its mouth in order to inject any venom into the smaller animal. The ringneck snake accomplishes this by first catching and constricting its prey.

The snake bites its prey to injure it, and then it coils itself around its prey to hold it still. Once the prey is securely held, the ringneck snake moves its mouth all the way forward, making sure that the fangs at the back of the mouth puncture the prey’s skin.

According to the Florida Museum, an institution supported by the University of Florida, ringneck snakes rarely bite humans, even when they are being handled. When a ringneck snake is startled or if it perceives a threat, the snake is more likely to coil up.

The ringneck snake may also raise its tail, showing off its bright-colored belly. This bright color is similar to the colors of many dangerously venomous snakes. By showing its belly color, the ringneck snake is attempting to scare away its attacker by making them think it is more dangerous than it actually is.

A ringneck snake may also attempt to scare away its attacker with a nasty smell. It will emit a musk from the glands inside the snake’s cloaca.

Of course, if a ringneck snake feels cornered and unable to escape in any other way, it may still strike out with its teeth in a last-ditch attempt to save itself. Ringneck snakes are happiest when they are left alone.

If you are bitten, you may feel a slight stinging sensation in the bitten limb. There is no need to panic, because ringneck snakes are not deadly to humans. Still, remember to stay calm and keep the bite clean, because a cut can become infected no matter what animal gave it to you.