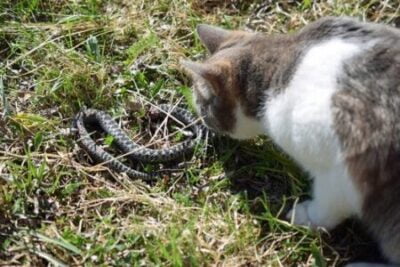 While snakes have a reputation as being dangerous and scary creatures, that doesn’t mean they can’t be scared of stealthy animals that are larger than themselves. There are many creatures that can frighten a snake, and it’s highly likely that a snake could be afraid of a cat.

Snakes will try to avoid cats. If the snake can’t escape, it will use defensive behaviors like hissing, rearing up, tail shaking, and striking. Snakes are frightened of cats because they move very quickly, attack with claws and teeth, and are larger than most species of snakes.

Cats have different personalities, and some are more curious or aggressive than others. The same applies to snakes. The more aggressive the snake, the more likely it will become defensive when it encounters a cat in the wild.

‘Scared’ may be the wrong word. While fear is processed in the simplest part of the brain, you shouldn’t anthropomorphize animals.

What can be said for certain is that snakes will either flee or become defensive in response to cats. They can show this in many ways:

All of these responses can be seen if a cat and a snake get into a fight. Unless the snake is cornered, it will do everything it can to flee the cat. But if it can’t escape, it will display these types of defensive behaviors.

Cats are predators and attack other animals, including snakes. This has been proven by scientific study. The Journal of Chemical Ecology looked at the way in which cats respond to snake scent gland secretions. This is key to understanding the predator-prey relationship between snakes and cats.

The study found that the scent gland secretions of snakes repel predators. The prey animal may release a bitter-tasting, or even poisonous, secretions to deter predators.

The scientists took the scent gland secretions of a gray rat snake and applied them to both filter paper and food. The cats would paw or rub themselves on filter papers treated with the secretions than controls. But they preferred eating food treated with water than with these secretions.

Cats are predators and snakes are prey. A snake’s scent gland secretions evolved to deter predators, including cats. This wouldn’t be the case if cats never attacked snakes.

Why Do Cats Attack Snakes?

Most cats are as wary of snakes, as snakes are wary of cats. That especially applies if the cat has never seen or interacted with a snake before. But once a cat overcomes its initial curiosity, it may attack. That’s because:

This doesn’t always apply because most cats never encounter snakes. Most cats will avoid a snake if they see one. But if the cat lives in a place with lots of snakes, it may be used to them and attack them frequently.

Can a Cat Kill a Snake?

Your first thought would be that a snake could easily defend itself against a cat. Many snake species have long fangs and are quick to strike. But a letter to the editor of Science from 1894 detailed a case in New Jersey:

“A family living in Southern New Jersey has a cat, not large or powerful, but very lithe and active, that has been in the habit of going off to the woods and returning with dead snakes of different species, up to three or four feet in length. After dragging it home, she would proceed to eat the snake…”

Further anecdotal evidence since then backs up this belief. However, cases are few and far between because snakes have become less common in human-inhabited areas.

A cat would seek to avoid large constrictor snakes, such as Burmese pythons or Anaconda, due to their size. If these huge snakes can kill pigs and deer, they can definitely constrict and kill feral and house cats.

How Could a Cat Kill a Snake?

A cat will leap at its prey, heading for the neck. It will bite down on the neck and try to twist it, and in doing so, break it. Snakes have necks and backs that can break like any other vertebrate.

That being said, cats can’t kill any snake. A cat would have an easier time killing a juvenile constrictor snake than an adult rattlesnake.

Why Are Snakes Frightened of Cats?

The snake understands that the cat is a threat, and so is wary of it. But there are other reasons besides this that a snake will avoid or be afraid of a cat, even if it has never seen one before.

Cats Are Bigger than Snakes

Snakes are rightly afraid of animals that are bigger than they are. All animals share this common fear.

The reason is that even if the larger animal doesn’t want to hunt you for food, it could attack out of fear, or even out of irritation.

Depending on the size of the snake, the cat may be bigger than it. This would be cause enough for the snake to be nervous around the cat.

Cats Have Sharp Claws and Teeth

Another reason why snakes are afraid of cats is that cats have excellent ‘weapons’, in their claws and teeth. In a fight between a cat and a snake, the snake won’t initially bite, but will pretend to.

Rather than using its fangs, it will bump the cat with its nose as fast as it would strike. The point is to shock the predator.

The cat, for its part, will likely use its claws. Cats keep threats at a distance by batting them with their paws. They may use their claws when doing so. So, the snake will be aware that the cat has a ‘weapon’ it can use. This will make it afraid to get any closer.

The same applies if the cat used its teeth to bite the snake. This would give the snake a shock, and make it scared of cats in the future.

Cats have quick reflexes. They, like snakes, can lash out quickly and without warning using either its claws or teeth. Sudden movements are something that most animals are wary of.

This certainly applies to when cats and snakes interact. The cat will often keep the snake at a distance, batting it with its paw. Its paw movements are quick, in and out, to attack but not to get attacked back.

And if a cat decided to launch a full attack, it would do so quickly by leaping. Again, snakes are wary of this.

Can Cats and Snakes Live Together?

Cats and snakes cannot get along or become friends, no matter how long you keep them together. They are entirely different species and can’t understand each other. Snakes are not social animals.

You should keep your snake in a cat-proof room. Keep the door shut at all times so the cat can’t get in. And if you ever take your snake from its enclosure for handling, keep the cat shut in another room.