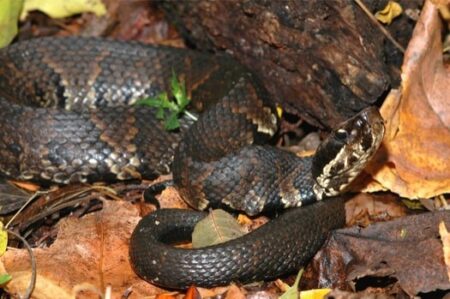 Snakes have extremely flexible bodies. It’s easy to watch a snake bend itself into s-shapes and wonder if it has bones at all. Do snakes have vertebrae?

Snakes are vertebrates. Their long spine consists of many individual vertebrae that can move in different directions, creating their high level of flexibility. A snake’s backbone helps it move around, as well as protecting its internal organs.

Let’s look more closely at vertebrates and invertebrates, and learn what this information can tell us about the body and skeleton of a snake.

How Can We Tell If a Snake is a Vertebrate or an Invertebrate?

To figure out whether a snake is a vertebrate or an invertebrate, let’s first learn what the differences are between these two main groups of animals.

What is a Vertebrate?

Vertebrates are animals that have a backbone or a spinal column. The bone pieces of this spinal column are often referred to as vertebrae.

These animals can be either cold-blooded (ectothermic) or warm-blooded. Cold-blooded animals, like reptiles, amphibians, and fish, cannot maintain a constant internal body temperature.

Many animals are vertebrates, including mammals, amphibians, birds, fish, and reptiles. This adds up to around 65,000 known species of vertebrates. However, it’s worth noting that that is only about 3% of all known animals. Far more animal species here are invertebrates instead.

What is an Invertebrate?

Over 96% of all animals on Earth are invertebrates. Unlike vertebrates, invertebrates do not have any backbones or spinal bones. We are currently aware of over 2 million species of invertebrates, and it is possible that millions more exist and have yet to be discovered.

Aside from this shared characteristic of lacking a backbone, invertebrates are a widely varied group. They may be big or small, and they may swim, run, or crawl. They might have many legs, or no legs at all. Some of these invertebrates, like echinoderms, do not even have a head.

The largest known invertebrate is the colossal squid, which can weigh over a thousand pounds and reach over 40 feet in length. The smallest invertebrates, such as the rotifer, are too small to be seen with the human eye alone.

Are Snakes Vertebrates or Invertebrates?

If you simply look at a snake, you might be tempted to think that it does not have a backbone. Snakes are very flexible, able to flip and twist around much more than a human can.

However, snakes actually do have bones. In fact, their backbones are made up of many more vertebrae and ribs than a human’s backbone. Humans usually have 33 vertebrae and 24 ribs.

Snakes, on the other hand, can have between 200 and 400 vertebrae, with just as many ribs attached to their backbone. The exact number depends on the size and species of the particular snake. This large number of vertebrae is what makes snakes so flexible and surprisingly strong for their mass.

There is evidence that snakes have had backbones throughout history. Fossilized snakes can be found all over the world, such as the bones of the grass snakes uncovered by researchers at the University of Amsterdam. Millions of years ago, some snakes even had arms and legs, though evolution took these limbs away.

What Purpose Does a Snake’s Backbone Serve?

There are a few different benefits to snakes having a backbone.

All of these vertebrae and ribs are connected to strong muscles. Together, the bones and muscles protect the snake’s internal organs.

A snake’s internal organs include a long throat with an even longer stomach. The snake also has two lungs, a liver, kidneys, and intestines stretched out in its long body. As you can see, that’s many lengthy organs, which require many ribs to keep them safe and snug inside.

The many bones that make up a snake’s flexible back help them to move around in their unique, slithery way. Each individual vertebra in a snake’s backbone can move a full 360 degrees around.

The vertebrae are connected to each other by sockets similar to a human’s shoulder. These sockets allow the snake to move and turn at many angles, at each part of its long body. This is what allows the snake to seem like it doesn’t have any bones at all.

Snakes usually move in a slow, careful way, shifting only one vertebra at a time. With each movement, the snake pushes itself forward, its belly scales gripping onto the surface beneath it. This is how snakes can move on almost any surface, whether they are moving horizontally through the undergrowth of a forest or vertically up the side of a tree.

If a snake needs to move more quickly, it can move many of its backbones at once for a bigger push forward. This is when snakes form that iconic S-shape on the ground.

What Other Bones Does a Snake Have?

In addition to the bones of the spine, snakes have other bones that make up their skeleton. All of these are connected to the snake’s spinal cord, creating a complete body structure. Let’s take a look at each of these bones.

Like other vertebrates, snakes have a larger brain when compared to invertebrates. This allows the snake to make important decisions about hunting.

The skull is a vital bone, because it protects and houses the snake’s brain, just like a human’s skull does for our own brains.

In addition to helping protect its internal organs, a snake’s ribs help it digest its food.

Snakes tend to eat meals that are much larger than their own body. The ribs are flexible like a snake’s backbone. So, as the snake flexes its spine behind the food, the ribs help move the food along the snake’s digestive tract. Otherwise, this would be a far more difficult process.

The bones of a snake’s tail do not protect the body’s internal organs as its other bones do. However, these bones still allow the snake extra flexibility in its tail.

The snake can control the movement of its tail just as precisely as it can move every other part of its body.

Many snakes will use their tail as a tool to draw in prey, flicking it around like a tasty worm. This can trick a smaller animal into coming near for a snack, until the tables turn and the snake enjoys a meal instead.

A snake’s lower jaw is two separate pieces, connected by a flexible tissue. This separation allows the snake to open its mouth much wider than most other animals. It also lets the snake move each side of its jaw individually, working its way down the animal’s body.

That’s how a snake can get its mouth all the way around such large prey.

Can a Snake Break Its Bones?

Seeing how flexible a snake is, you might wonder if a snake cannot experience a broken bone in the same way a human can. However, snakes’ bones can break just like any others.

Another injury that these reptiles can experience is dislocating their vertebrae, also known as breaking their back. This can happen when a snake folds itself backwards, which is usually done in a frantic attempt to escape someone or something that has grabbed it by the head.

Breaking its back is painful for the snake, and it can cause paralysis or even death. Remember to avoid grabbing a snake by the head, so you don’t scare it into hurting itself.