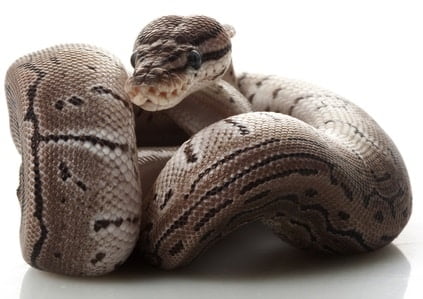 Axanthic ball pythons are a base morph, which means that they can sometimes be found in the wild. Breeders like axanthics because they are beautiful snakes, and they can produce snow ball pythons.

The axanthic ball python is a base morph that is black, gray/silver and white. Their color changes because of a recessive gene. Some axanthics will ‘brown out’ as they get older.

Axanthics are entirely black, white, and gray/silver all over. Any brown and yellow colors have completely faded away. That’s why they were given the name ‘axanthic.’ Axanthic comes from Greek, meaning ‘lacking yellow’.

There are several lineages of the axanthic ball python. Some look almost the same from the moment they’re hatched until they age. Others will develop a slight brown tinge in the pale part of their pattern as they age.

Axanthic snakes rely on a mutation in their genes to appear the way they do. All ball python morphs are the same in that way.

VPI vs Snake Keeper vs Jolliff vs Marcus Jayne

The four lines are VPI, Snake Keeper, Jolliff, and Marcus Jayne. In terms of appearance, each line is very similar to the others.

Some breeders think that VPI snakes hold their color better than other lines. The other 3 tend to ‘brown out,’ i.e. get a brown tinge more than VPIs.

VPI, Snake Keeper and Jolliff lines are all incompatible with one another. So, you can’t breed them to create new axanthics.

Is the Axanthic Gene Recessive?

The opposite is ‘heterozygous,’ i.e. the pair of genes are different from one another (‘hetero’). This is important to remember if you want to breed axanthics or any morph with recessive genes.

How Much Do Axanthic Ball Pythons Cost?

Axanthic ball pythons vary in price for several reasons. As mentioned, many of them will ‘brown out,’ which affects their monotone look. You can buy them for as little as $50.

Breeding age females of any morph tend to be more expensive. If you were to keep one, and breed it, you could potentially make your money back. These would cost several hundred dollars each.

Whatever the case, axanthics aren’t that common. Far more common online are axanthics that are crossbred with other morphs (designer morphs). These snakes fetch $200-300, or more if it’s a good looking snake. Here’s some further information on how much snakes cost.

Black axanthics are a new line of axanthics, first bred in 2008 by Tracy Barker. They’re a base morph rather than a designer morph.

While they lack yellow, they also don’t have the light grays/silver axanthics usually do. They have small outlines of white that aren’t so obvious.

Not all examples are quite as dark. They range from almost regular axanthics to very dark. They don’t brown out in the way that other lines do.

Red axanthics are different from regular axanthics. Their mutation is codominant rather than recessive. That means that heterozygous red axanthics are a visual morph, and that a super morph is possible.

As the name suggests, they have a red hue to them. They may also have a slightly different pattern (a pure black back).

The super pastel axanthic is a variable snake. It starts out as pure white and black. It may also have white blushing in its dark black pattern.

Over time, it will fade out a little, almost like regular axanthics experience ‘brown out.’ Instead, the super pastel axanthic will get lighter as it ages. The blush in its pattern becomes more prominent and the high contrast between white and black disappears.

It’s like the reverse of an axanthic. Rather than appearing dark because of all the gray, it appears light because of its bright white.

Clown ball pythons don’t just have a different color, but a different pattern. Again, their mutation is recessive. They get a reduced pattern overall, but also a wide dorsal stripe (along their back).

In some specimens, the pattern of stripes along their sides is almost or absent. Their name comes from the original clown ball python, which had dots underneath its eyes, which looked like a clown’s makeup.

An axanthic clown takes this pattern, but keeps the axanthic color. They have a stripe running along their back that may have a small amount of white/silver blushing. Their sides are silvery gray.

When it was first on sale, it wowed buyers. Unlike axanthics, it has no gray, the white is pure white, and the black is pure black. Nobody had ever seen anything similar. That’s why it was initially listed for prices of $50,000.

But as the snake aged, its color and pattern changed. The black pattern started to spread and smudge. It became blurry, like ink spreading on paper. It’s like the reverse of the super pastel axanthic.

In the end, the snake became almost equal parts black and white. It was smudgy and splotchy, but it’s still a unique snake.

Axanthic albinos come out looking like healthy offspring. You get normal snakes that are het for snow. When you breed a pair of these snakes together, there’s a 1/16 chance that the offspring will be a snow.

How to Breed Axanthic Ball Pythons

It needs to get the axanthic gene from both parents, not just one. Otherwise, the normal ball python appearance genes would be expressed.

You need to breed two homozygous axanthics together. If you do, then 100% of the offspring will be axanthic. In the breeding world, this is a real bonus as many programs don’t guarantee a certain offspring.

It is possible to breed two heterozygous axanthics together. These snakes don’t display the axanthic gene because it’s recessive. They look normal.

If you breed two het axanthics, there’s a much smaller chance of axanthic offspring. 25% of the offspring will be normal, 50% will be het axanthic and 25% will display the axanthic gene.

Breeding involves the following a defined process for maximum effectiveness. That process is as follows:

Once the snake becomes gravid (pregnant), follow conventional breeding protocols. That means keeping the eggs inside an eggbox, inside an incubator. Here’s our guide to incubating eggs. Like all ball python eggs, they will take between 53-55 days to hatch.