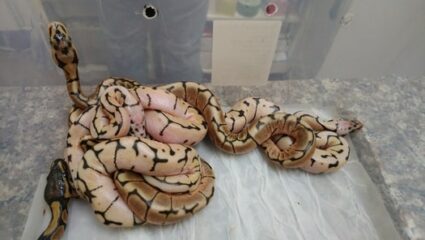 To breed ball pythons, you need to get the necessary equipment. This includes an egg box, perlite or vermiculite substrate, and an incubator. To avoid health problems, make sure that your ball pythons are old enough and large enough to breed before you attempt to get them to mate.

Temperature cycle both the male and female through the winter before introducing them in the spring. Encourage the male to mate by introducing him to competing males. Males compete for females in the wild, so this will encourage him to mate. Do not disturb them while coupling to allow them time to mate. The female will soon become gravid (pregnant). About 6 weeks later, when the female lays her eggs, put them in an incubator. After about 60 days, the eggs will hatch.

Ball pythons are usually easy to breed. However, if you’re inexperienced with breeding pet snakes or want to breed the more exotic ball python morphs, you’ll want to know how and when to get started.

Before you breed your ball pythons, think about your plan for the future. Are you going to keep the hatchlings, sell them, or give them away?

You need to have an egg incubator ready. While the female will try to incubate her eggs, they will thrive in an incubator.

Ball python clutches can be up to 11 eggs. Make sure that you have appropriate food supplies and enclosures available for the offspring. Ball python hatchlings are hungry for rodents (pinkies).

How To Breed Ball Pythons

Snake breeding is a long process that takes the better part of a year. Let’s look at the timeline for breeding ball pythons.

It can be difficult to tell what sex your snakes are. You can go to a reptile veterinarian to find out the sexes of your snakes. The process used to determine the sex of a ball python is called probing. It involves taking a sterile probe and gently sliding it into the snake’s cloaca.

This probe enters the cloaca going towards the tip of the snake’s tail. You can use a water-based lubricant to help the probing be a smoother and more comfortable process for the snake.

When you feel resistance to the probe’s further movement, stop probing. Hold the probe with your fingers so that you mark how deep the probe went into the snake, and then carefully slide the probe back out again.

Females are usually ready to breed by their third year of life. A good rule of thumb to follow is that the ball python should be above 1,500 grams in weight. Even if a 2-year-old ball python is that weight, it is still too young to breed, and so you should be patient for another year.

Ball pythons sometimes stop eating while they are breeding. If you start a male breeding too early, it might not have enough weight to survive the oncoming fast. On the other hand, a male that has been fed too much will become lazy and disinterested in the breeding process.

With both males and females, keep an eye on their body structure. Do not try to “fatten up” your snake to reach the 1,500-gram threshold. An obese snake will not be healthy enough to breed. You want your snake’s body to be firm to the touch with a good, stocky torso. A slightly older and larger snake is more likely to have a larger clutch of eggs.

Breeding season begins in mid/late September, which is when temperatures drop in the wild. Therefore, to breed your ball pythons, you should keep their enclosure cooler than usual. This will mimic the ball python’s natural living environment and allow the female to become fertile.

When you are breeding a ball python, you want to bring those temperatures down, particularly during the night. The cooler side of the habitat should be in the mid-seventies, and the warmer side should be in the low to mid-eighties, again in Fahrenheit. You can allow the temperature to rise again during the day to normal levels.

Often, when you first introduce a male ball python to a female ball python, the snakes will not be interested in each other. These snakes are not overly social animals and really only come together to breed in the wild.

If you have more than 2 males, then you have a quick way to get around this lack of interest. The best way to stimulate a male ball python into sexual interest is to put it in an environment with other males. Normally you want to keep your ball pythons in separate enclosures, but at this time you can put 2 or more males together.

The males will notice each other, raising themselves into nearly vertical standing positions. The presence of another male triggers a competitive nature in the snake. At this point, the male will be ready to breed, and be much more interested in the female.

Put the male into the female ball python’s enclosure. At this point, it’s time to let nature take its course. The male will display courting behavior, which includes pressing its belly against the female.

Do not be concerned if you notice the ball pythons fighting a little. This is normal behavior, and it is very rare for these snakes to injure each other. They will settle down and connect with each other in a position known as a lock. In a lock, the male’s tail is visibly twisted underneath the female’s tail. It looks a bit like when you cross your fingers.

The ball pythons will remain connected in their lock for at least 4 hours to ensure successful breeding. However, they may remain connected for up to 2 days. Be careful during this time not to interrupt, frighten, or otherwise disturb your mating snakes. They will stop coupling if they are bothered, which may render the breeding unsuccessful.

Once the snakes separate on their own, it is time to move the male snake back to its enclosure. You can use the same male to breed with multiple females. Just make sure to keep track of which snakes have already locked together so you don’t try to mate with an already gravid snake.

After a successful lock. You will notice some behavior and appearance changes in the female ball python. It will spend more time away from the warmer part of the cage, coiling up in the cool side of its enclosure. Often the female will wrap itself around the water bowl or lie with its belly facing the air instead of the ground. These are good signs that your female snake is gravid – which is to say, it is ovulating and creating eggs.

Regarding appearance, the female may get a kind of “lumpy” look to their belly or lower half of the body. Her scales may also seem to glow more than usual. Her behavior around feeding time may vary widely, with her one day seeming ravenous for more than her usual share of food, and the next day suddenly not showing any interest in food at all.

Around 2-3 weeks after the ball python begins to ovulate, she will shed her skin. The new skin is often even more colorful. Then you will find yourself playing the waiting game. Usually, it takes around 30 days after the shedding for the ball python to lay its clutch of eggs.

Ball python egg clutches can include anywhere between 1 and 11 eggs. According to the Biological Journal of the Linnean Society, this clutch size limit may be due to how many eggs a typical female ball python could successfully cover and appropriately incubate in the wild.

After a female ball python lays her eggs, she will wrap itself around the eggs. However, you shouldn’t leave the eggs with the ball python. Instead, you should transfer the eggs from the habitat to an incubator.

Be gentle but firm with your ball python snake while removing it from its clutch. Unwrap it from the eggs and place her in a separate container. To avoid getting bitten, pick up the snake from behind.

Then, take a sharpie and place a dot on each egg, to mark which side of the egg is facing upwards. It is essential that ball python eggs remain face-up throughout the incubation process.

A healthy, fertilized egg is large and white. If any of the eggs are much smaller than the others and have a yellow or brownish tint to them, it is, unfortunately, an unfertilized egg and will not hatch after incubation.

Transfer the eggs into the incubator, keeping them right-side up. Incubate the ball python eggs at 83 degrees Fahrenheit. It can take between 60 and 80 days for the eggs to hatch, so again you need to be patient.

Don’t forget about the female ball python. It’s time to make sure she re-acclimates to her habitat in a comfortable and healthy way. A vital part of this is thoroughly cleaning and sanitizing her enclosure. You should wash the snake as well, using mild soapy water.

This cleaning will get rid of the scents related to eggs and giving birth. If you skip the cleaning step, then the snake may assume that she still has eggs and try to incubate something in her enclosure, such as the bedding or the water dish. This can also lead to the snake refusing to eat.

The baby ball pythons will hatch from their eggs. They do not require assistance breaking free from the shells, but some owners cut open ball python eggs. Once the baby snakes have hatched, they will soon go into their first shed cycle. Separate the snakes into small hatchling enclosures.

After their first shed cycle, you can present the hatchlings with their first meal. This should be a pinky mouse. There is a chance that the snake will not eat on the first day. If so, try again the next day.

You can feed your ball python hatchlings either frozen-thawed prey or live prey. Some breeders have more success getting their babies to eat live prey than frozen prey, but you should be careful. Never leave a live mouse or rat in a hatchling’s enclosure for an extended period of time. The rodent can injure the baby snake. Frozen prey is much safer for captive snakes.

Once the baby ball pythons have been born, it’s time to get them to their new homes. If you are planning on keeping all of the snakes, have enclosures ready for each of them to live and grow in. You can set up these enclosures during the incubation period.

These ball pythons can grow up to breed your next generation of snakes. You can also give away or sell these ball python hatchlings to other reptile keepers, breeders, and pet owners. On average, a ball python will live for 20 years or more in captivity. These snakes are lifelong companions.

Breeding ball pythons require a lot of patience. At the same time, it is an exciting experience in which you get to witness and take care of a new life.