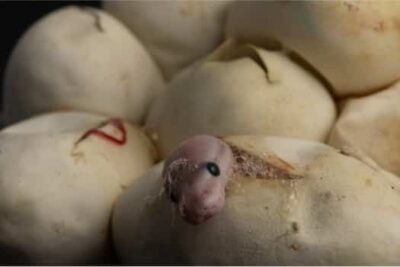 Ball python eggs may look ‘deflated’ or ‘collapsed’ if the conditions they are kept in are suboptimal. You need to keep the humidity and temperature at the right level in order to keep the eggs healthy.

Deflated ball python eggs are usually a sign that the conditions aren’t humid enough. This may be because the egg box lid is loose, the fan is drying the eggs out, using the wrong type of substrate, or the hygrometer is giving an incorrect reading. Of course, ball python eggs sinking in could simply be a sign that they’re about to hatch.

Dimpling is a natural part of ball python egg development and it’s usually difficult to avoid. Ball python eggs that dimple will normally go on to hatch. You just need to correct the level of humidity as soon as possible.

Contents show
1 Why Are My Snake’s Eggs Collapsing?
1.1 Incorrect Humidity Level
1.2 Substrate Doesn’t Hold Moisture
1.3 Hygrometer Not Working Correctly
1.3.1 Does Temperature Deflate Snake Eggs?
1.4 Eggs Collapse When About to Hatch
1.5 Removing the Egg Box Lid
1.5.1 Leaving the Lid Off
1.5.2 Keeping the Lid On
2 Do Collapsed Ball Python Eggs Always Die?
2.1 What To Do with Collapsed Eggs

Why Are My Snake’s Eggs Collapsing?

But when these factors are corrected, the eggs will pop back out. In some cases, they can pop back out in a matter of hours.

All of the issues are related to humidity. This is by far the most important factor when incubating eggs. Here’s everything that can go wrong:

So, not all of the reasons are bad—the eggs could be about to hatch. But if you notice your ball python eggs dimpling early, it’s a humidity issue.

The main reason for ball python eggs collapsing is if they’re dehydrated. Humidity is by far the most important thing to account for during incubation. There are several ways that eggs can become dehydrated.

When you’re preparing your egg box, there are several things to account for. You should line it with an appropriate substrate, i.e. vermiculite or perlite. This substrate holds onto moisture, but also allows for air movement around the eggs.

These substrates don’t hold or absorb water. They allow it to circulate instead. This is what you want as, without circulation, the humidity will stay in the substrate. Then, the level around the eggs would be too low.

The vermiculite doesn’t need to be completely sodden. Spray it thoroughly after lining the bottom of the egg box with it. Then place the eggs in as you usually would, and shut the lid securely.

Alternatively, mix it with water until it’s damp. If you can hold it, squeeze it, and see water dripping out, it’s ideal. This is the rule of thumb that most snake owners adhere to when incubating eggs. You could also put a bowl of water in with the eggs, although this isn’t necessary.

The moisture level in the egg box should remain between 95% and 100%. At maximum humidity, it is possible to see a little mold. This will occur if there are slugs among the eggs. If you kept the egg box clean, and got rid of any slugs, there won’t be mold.

If you use the wrong kind of substrate, it won’t keep the eggs at the right humidity. If you use a substrate that holds onto a lot of moisture, the eggs will end up dry and will collapse. If left uncorrected, they won’t hatch.

Let’s say you already have some aspen shavings for your snake. It might feel fine to line the box with these, rather than using a different substrate.

Aspen holds onto lots of moisture. It only releases it when it gets completely soaked. That’s what makes it a good substrate for a snake enclosure. But it’s also why aspen is unsuitable for incubating snake eggs.

That’s why you should use vermiculite or perlite. These substrates don’t hold onto moisture, so it keeps the eggs healthy.

If you’ve set a hygrometer in the egg box, and it’s displaying ‘100%’, you would naturally take the results at face value. But if the hygrometer isn’t working properly, then the eggs could be far too dry.

For starters, hygrometers aren’t perfect. Even the best have a rough window of around 3-5% either way, where the reading could be incorrect. Right off the bat, this might mean your humidity is lower than you expect.

Also, gauges tend to work less well at the extremes they’re supposed to measure. When the humidity is very high, a poor quality hygrometer may have difficulty differentiating between 90% and 100%, for example.

If you have more than one hygrometer, check them against each other. Otherwise, take it out and place it somewhere dry. See if the reading changes to something that’s about right.

Having the temperature set incorrectly is bad for the eggs, but it doesn’t result in them becoming deflated. That’s solely due to a lack of humidity.

If the eggs are too cold, you won’t notice any immediate physical changes. The eggs will look the same as they did before. However, they may not develop properly. If this is the case, the eggs will go bad like slugs do.

Eggs Collapse When About to Hatch

Before hatching, the eggs will become crumpled and indented. It’s not clear exactly why this happens, but it’s likely to do with the snake moving around inside the egg.

The snake first develops along the inner wall of the egg. Like other creatures, the snake has an umbilical cord which it must sever. In this process, it has to separate itself from the wall of the egg. This is likely why the eggs become indented during this stage.

This isn’t an issue. Allow the snake to hatch naturally. It will pip the egg from the inside with one of its teeth. There’s no need to pip the egg yourself, although there are reasons why it can be beneficial.

You can incubate eggs with the lid on or off. Each has its pros and cons.

Leaving the Lid Off

Leaving the lid off your snake’s egg box allows the humidity inside to escape. But at the same time, it assists with air circulation. Even though baby snakes are inside their eggs, they still need oxygen.

You want to maintain a constant temperature and humidity. When you leave the lid off, the fan in the incubator may dry the eggs out further.

A good compromise is to leave a couple of air holes in the lid, or the egg box. This allows some air circulation, but not too much. If the fan is active, it stops the cooler air from reaching the eggs directly.

But even then, maintaining humidity would be difficult. You would have to open the incubator to spray them. This would allow the air inside to escape. Temperature variability is bad for ball python eggs.

Keeping the Lid On

Leaving the lid on will maintain humidity inside the box. If the box is completely airtight, and you’ve sprayed enough, then the humidity would stay at 100%. That’s a good thing because eggs need a consistent temperature and humidity.

If it’s airtight, you may notice drops of water forming on the lid. This is a bad thing, as the drops will fall directly onto the eggs. It indicates that you sprayed too much water.

Small amounts of moisture on the walls of the box are fine. However, with the lid on, the eggs won’t have any air circulation. This may allow mold to form. And if you left them inside the box, they may not even have enough oxygen. This is just as bad as not having enough moisture.

You have to open the lid of the box occasionally to allow some circulation. When you do, the temperature in the incubator will change. The humidity in the egg box will dip, too, which isn’t optimal.

You’re best off leaving the lid on almost all of the time. Occasionally lift the lid of the box to check inside and allow air in. Spray the substrate, not the eggs, once to replace the lost moisture. Replace the lid when you’re done.

If you notice your eggs beginning to deflate, take the following steps:

According to Nature, snake eggs that have developed for less time will go through the ‘catch up’ process. They develop quicker so that they can hatch at the same time as other eggs.

Check on the eggs a few hours later. They may already have popped back into their original shape. If they haven’t, give them until the morning. After a full day, they should have rounded out again.

What To Do with Collapsed Eggs

If none of this corrects the condition of the egg(s), don’t throw the egg(s) away. Candle it to see how it’s developing. If the others have veins, and this one has veins too, leave it in the egg box and see if it hatches.

If the color of the shell changes, and the egg collapses further, it may be a slug. These are unfertilized eggs. They will begin to rot if left in the egg box for long enough. Candle the egg to check its development. If it looks ‘clear’ when the others aren’t, you should throw it/them away.