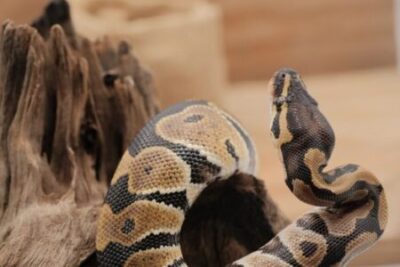 Have you noticed your ball python’s breathing isn’t normal? It’s common for a ball python to change the way it breathes in response to external stimuli. There are many reasons why your ball python is taking deep breaths, so what is wrong with the respiratory health of your snake? Is it completely natural a cause for concern?

The most likely reason for deep breathing in ball pythons is a respiratory infection (RI). Your snake is struggling to breathe, so it uses its mouth to breathe instead of its nose. Taking deep breaths due to stress is also a common cause. Inclusion body disease (IBD), a viral infection that affects the nervous system and other vital organs, is a fatal condition in boas. This also affects the respiratory system.

Snakes dislike being disturbed after they’ve eaten because they’re digesting food. They don’t want to move, so they seek a safe place to hide.

If you were to disturb your ball python while its digesting, it might appear nervous and breathe quite heavily—perhaps not loudly, but with its sides rising more visibly than usual.

Be sure to leave your snake alone for at least 24-72 hours after its eaten, until it’s more active, and before handling it again.

Your ball python will also change the way that it breathe while eating. This is essential because snakes swallow their prey whole. It will move its glottis to one side so that it can still breathe while it has prey in its mouth.

The glottis is at the top of the windpipe, which can be moved to one side so that your ball python doesn’t choke.

Heavy Breathing in Snakes Due to Stress

Stress affects the breathing of a snake, just as it does humans. Things that can cause stress in ball pythons include:

You have to do is identify what’s causing stress and make adjustments.

A respiratory infection has similar symptoms to a cold or flu. The snake’s nose, throat, and lungs (its respiratory system) become infected by bacteria or a virus. Your snake will experience the following symptoms:

When a ball python’s nose is blocked, it will make a wheezing sound. It may also open its mouth to breathe because its nostrils are blocked.

What Causes RI in Ball Pythons?

Because snakes are cold-blooded, the most common cause of respiratory conditions is when the ball python’s enclosure is too cold for its needs. This affects the snake’s ability to fight off bacterial respiratory infections.

Ball pythons enjoy basking temperatures of between 88 and 94 degrees. Lower than this and they stand a higher chance of becoming ill.

How to Treat RI in Ball Pythons

To treat a respiratory infection, you’ll need antibiotics from your vet. They can be given by mouth, injection, or even inhaled.

It’s vital that you use only vet-prescribed antibiotics. That’s because there are many different bacteria and viruses that cause respiratory infections. One antibiotic will work whereas another may not.

The vet will take a sample and quickly identify which virus/bacteria is causing the infection.

A baby ball python respiratory infection is particularly dangerous, so make sure to treat a hatchling without delay.

To reverse the effects of a respiratory infection, and to prevent one from happening again, it’s vital that you correct any problems you find in your snake’s living environment. A ball python should have:

Aside from the temperature and humidity of the enclosure, it’s also vital that you provide them with the right type of substrate. Since ball pythons like to burrow, Aspen shavings are a good choice.

Inclusion body disease (IBD) is most commonly seen in boa constrictors, but it can also affect ball pythons. One of the symptoms of IBD is wheezing.

But according to Veterinary Record, many other symptoms should make it obvious if IBD is the reason why your ball python is taking deep breaths:

What to Do If Your Snake Has IBD

The best thing to do for a snake that has IBD, unfortunately, is to euthanize it. The condition is progressive and will only get worse.

There’s no set timeframe as to how quickly it takes for IBD to kill a snake, but it’s possible that it will progress rapidly.

Not all vets deal with reptiles, but you’ll need to talk to a vet over the phone to verify the symptoms and decide how to proceed.

It would be unwise to bring it in to see the vet without this consultation since IBD is a highly contagious viral condition. There’s a high chance that your snake could pass the virus on to other boas.