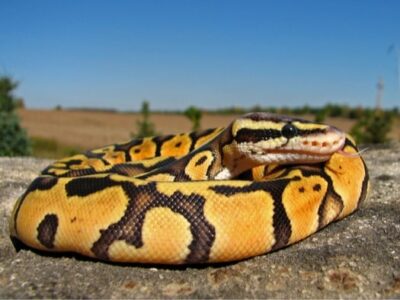 There are so many beautiful ball python morphs, but they aren’t all genetically healthy snakes. The International Herpetological Society (IHS) has banned royal pythons that have the spider gene from being sold at their events, for example, because they’re prone to ‘head wobbles.’

Blue-eyed Lucy (BEL) and coral glows are among the most beautiful ball python morphs, and are largely free from genetic problems. You should avoid snakes with genetic issues, like head wobbles and kinks, such as caramels and spiders.

We’ve looked at the most popular color morphs, provided detailed descriptions, and included an indicative price guide. We’ve also covered how to tell ball python morphs apart, and why some morphs have genetic defects that will have a serious effect on your snake’s health.

How Are Ball Python Morphs Created?

There are two ways for a breeder to create snake morphs. The first is to import new snakes from their natural habitat. Occasionally, a new morph will be discovered and imported. These are known as base morphs.

This is beyond the reach of a regular owner or breeder. These snakes cost tens of thousands of dollars. People are willing to pay that because they believe they can breed the snake for large sums of money.

When the snake arrives, they will then attempt to breed it. This will prove that the color or pattern is genetic and inheritable. If confirmed, they will then sell the offspring to other breeders.

The other way to make a morph is to breed existing morphs together. So, for example, you could breed a lesser with a lesser, or pastel with a Mojave. This is something that a regular breeder, with just a couple thousand dollars, can do.

No one morph is the ‘best’ to breed. It depends on your taste, and your budget. Select a morph based on whether you like the way they look and behave, and whether the snake is actually healthy.

A good start would be to pick a male that has two, maybe even three morph genes. You could then breed the male with one or two co-dom females. This would be a fairly basic setup that you could start for $800-$1000. Good starter morph options include:

Morphs That Are Unhealthy

Not all morphs are created equal. Some are striking and beautiful, while others look dull. The genetic variations in some morphs cause them to develop health problems. The reasons to avoid such snakes include:

These genetic issues occur because morphs are genetic changes. While breeders are only interested in the color and pattern of a snake, sometimes genes do two things. So, a gene that makes a snake turn pure white may also affect the eyes (as happens with BELs).

While breeders care about the health of their snakes, some accept compromises. So while a spider ball python looks impressive, it also has genetic neurological issues.

So, which ball python morphs should you avoid owning? Here’s a list of the main morphs, and why they don’t make good pets:

There are genetic issues that certain morphs can have. We’re going to look at each of these genetic problems, and how it affects the snake.

One of the most severe genetic conditions some morphs have is the head wobble. This is where the snake has trouble balancing. Symptoms of head wobble in ball pythons include:

The head wobble is a neurological disorder. Many breeders refuse to breed snakes that have this condition. It affects the following morphs:

The first of these to have a recognizable condition was the spider ball python. Any other morph that was created from a spider also has the head wobble. It ranges in severity. There doesn’t seem to be a link between the parent’s wobble severity and that of the offspring.

However, it is proven to be a genetic issue. It’s related to the spider gene. You can tell because the regular offspring of a spider won’t have the wobble, while those that ‘express’ the spider gene will.

The issue also doesn’t seem to be related to inbreeding. It’s not possible to breed spiders with low wobbles. A spider with a low wobble can produce high wobble or low wobble offspring.

The more stressed the snake, the more the wobble shows itself. During handling and feeding, the wobble will be worse.

Kinking is a condition where the snake’s body isn’t properly formed. The back has a kink in it, which is a sharp bend to one side.

The severity of kinking varies. A snake may have just one kink in its back, and not at a sharp angle. Or, it may have several kinks at severe angles.

The more kinks the snake has, the more difficult it will be for it to move. Its organs may also be squeezed up against one another. That’s why kinking can kill the snake in severe cases.

Kinking can affect any morph, but it does affect some more than others. Disproportionately affected morphs include:

If kinking is extreme, then the snake won’t hatch successfully. If it hatches, then there’s a higher chance that it will die soon after.

This is a mutation, named because the snake’s skull changes shape. The mutation causes loss of bone in certain areas of the skull, which makes it more difficult for the snake to breathe or eat.

It’s noticeable as a dip between the skull and the nose. The overall effect is to make the nose appear smaller. Since this is where the vomeronasal organ is located, it’s unclear whether this makes it difficult for them to smell.

It may also stop them from being able to breathe as normal. When a snake’s mouth is closed, it pushes its glottis (the tip of their windpipe) against its nostrils. This allows it to breathe more easily when eating, for example.

The morphs that this issue is known to affect the worst are the super black pastel and super cinnamon.

Certain morphs have trouble producing offspring. These include:

Deserts have poor fertility in several ways. They frequently become egg bound when trying to lay. And, of the eggs they do lay, most will not be fertile and won’t successfully hatch. This may be because deserts have thermoregulatory issues.

Caramels have several issues, kinking being the best known. However, they also are subfertile. This means that females struggle to produce enough eggs (far fewer than a normal clutch). Of the eggs they produce, most are slugs. Slugs are duds, unfertilized eggs.

Morphs can have slightly different eyes. This usually is to do with the color, e.g., BELs or albinos. However, the eyes can also be a different shape. Some ball pythons, for example, can be born with:

Snakes born with tiny eyes, or no eyes, have a decreased quality of life. These snakes find it challenging to move around comfortably.

Through extensive testing, breeders have discovered that breeding certain morphs with other morphs results in unhatchable offspring. The offspring always die. The reason why is often unclear.

This is separate from other hatching issues. This has nothing to do with poor temperature control. This problem is purely genetic. Deadly morph combinations include the following:

If you breed these combos, most or all of the eggs won’t hatch. There’s something about the genetic changes in these morphs that means they can’t function biologically. That doesn’t stop breeders trying, however.

While the best ball python morphs are the most colorful and unique, breeding genetically unhealthy snakes should be avoided. A royal python with a head wobble or kinked spine will have severe physical limitations. Others will have a reduced life expectancy, and/or live a life of pain.