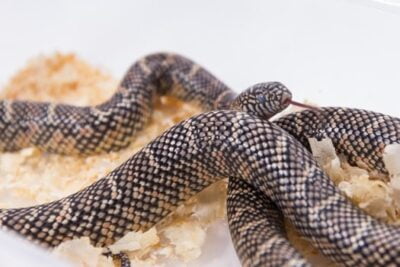 A substrate is the type of bedding that will line your snake’s enclosure. A good substrate will retain moisture well, not give off bad odors by absorbing urates, and not be easily ingested or inhaled by your pet snake.

Cypress mulch, Aspen shavings, and coconut fiber are good choices for burrowing and non-burrowing snakes. They are good at holding humidity and controlling odor inside the snake’s cage, and don’t pose a risk for impaction (constipation). Newspaper and paper towels are free options, but they don’t have a high tolerance to moisture and clearly aren’t suitable for snakes that like to burrow.

Not all types of bedding are safe for captive snakes. For example, sand can be easily ingested by your snake, resulting in hardened stools/constipation. You must also avoid using any substrate that contains cedar or pine as it releases oils that are harmful to snakes and reptiles generally.

Check how much moisture the substrate holds, how easy it is to clean, whether it harbors bacteria easily, and how much it costs. Bedding for snakes should also be based on the species and its requirements.

Note: According to the Lancet, snakes carry salmonella. Wash your hands thoroughly after handling your pet snake and its soiled bedding.

Snakes like cypress mulch because it is a comfortable bedding that allows them to burrow freely. Cypress mulch looks good in a snake’s enclosure and has a pleasant, but not an overpowering, ‘woody’ smell.

Many snake owners like to use cypress mulch, such as the Zoo Med Forest Floor Bedding due to its ability to hold moisture well and maintain humidity levels inside the snake’s living environment.

You don’t have to remove all of the cypress mulch during cleaning. Just scoop out the soiled mulch and replace it with a fresh batch. Cypress mulch is good if you have live plants inside your vivarium.

One major issue associated with any wood-based mulch, such as cypress mulch, is mite infestations. If your cage does get infested with mites, it can be harder to eliminate them as they thrive in cypress mulch.

Note: Always bake the substrate for half an hour before placing it in your snake’s enclosure. This will kill any insects or mites present in the chips.

Aspen shavings are a good choice for smaller snakes that don’t require high humidity. This type of bedding is good for burrowing snakes. The Zoo Med Aspen Snake Bedding is a popular choice because you can easily find and scoop out snake poop.

Since aspen shavings are wood-based, they are also lightweight and naturally odor-controlling. However, too much moisture inside your snake’s cage can make the shavings go moldy.

So, aspen shavings are only recommended for snakes that don’t need very humid environments. Particles are also very fine and can get under a larger snake’s scales on its ventral (belly) surface, causing irritation.

Some companies dye shavings to produce different colors, or infuse the shavings with chlorophyll. Wood shavings that have been artificially colored reduce the odor-controlling and moisture absorbency of the end product. Plus they may stain your snake scales.

Coconut fiber is a soft and comfortable bedding for snakes. However, coconut fiber substrate is more suitable for smaller burrowing snakes than larger snake species.

Like Cypress mulch and Aspen shavings, coconut fiber has odor-controlling properties that will keep your snake’s living environment smelling fresh. It holds humidity well, but it can be kept dry for desert species of snakes.

Coconut fiber helps break down waste and is easy to clean. You can scoop out the soiled fiber and replace it with fresh coconut fiber during cleaning without having to change all of the substrate.

Choose a product, such as the Reptile Prime Coconut Fiber Bedding Substrate. This option doesn’t contain any dust, so your snake can avoid respiratory issues.

AstroTurf (artificial turf) works similarly to carpeting. You should have at least 2 pieces of AstroTurf. You can then use a fresh piece of artificial turf while the cage is being cleaned or the soiled piece is getting washed.

AstroTurf is durable and easy to clean. However, its appearance does diminish after repeated washings. Artificial turf is a more visually appealing choice as it mimics real grass. However, snakes can’t burrow in AstroTurf, so it’s only suitable for non-burrowing snakes.

The only major drawback is that artificial turf tends to absorb odor from snake feces and urine. It may also trap dirt and bacteria in its fibers. Wash it thoroughly to ensure that it is odor-free and clean. Make sure the artificial turf is dry before placing it back into your snake’s enclosure.

Even though newspaper doesn’t make your vivarium look nice, it’s a free and easy-to-replace type of snake bedding. It’s often used by owners who want to reduce the cost of snake ownership.

Although free, newspaper does have shortcomings. It has little tolerance for moisture, and it’s unsuitable for snakes that like to burrow.

A further concern is that traditional inks may be toxic to snakes. However, most newspapers are printed using organic pigments.

Paper towels are similar to newspaper with respect to their absorbency, cost, and convenience. They can be removed when soiled and easily replaced with fresh paper towels.

Paper towels are not suitable for natural burrowers. However, you can shred paper to create fluffier bedding, which will be more suitable for snakes that enjoy burrowing.

Don’t use perfumed paper towels. Artificial fragrances can lead to respiratory problems in snakes. Furthermore, just like newspapers, paper towels get wet easily so you’ll have to replace them regularly. While paper towels are highly absorbent, they don’t offer much odor control.

You’ll need at least two pieces of carpet. You can then leave one inside the enclosure and keep the other as a backup for when it’s being washed.

If you don’t have any carpet remnants, some stores will cut the carpet to mett your snake enclosure size requirements, and others offer pre-cut pieces that you can size at a later date.

Carpets are ideal for non-burrowing snakes, and there is no risk of ingestion. They are available in many attractive colors. Carpets can also be washed and cleaned, helping you keep your snake’s tank sanitary.

You can reuse the carpet several times before replacing it. However, carpets are easily soiled, so you will have to wash them quite regularly.

What Substrates Should Be Avoided?

If a substrate gives off odors, has been treated with toxic chemicals or causes a risk for ingestion or impaction, it’s a bad option. The following are the worst substrates for pet snakes and should be avoided:

Sand is an aesthetically pleasing substrate, but it isn’t recommended for pet snakes. Snakes burrow in the sand, which seems like a positive thing, but there’s a risk that the snake will swallow sand particles.

When ingested, sand can lead to impaction in snakes. Sand can get under a snake’s scales, too. It is difficult to clean, doesn’t hold moisture well, and lacks any odor-controlling properties.

Several factors make cat litter unsafe for snakes. Cat litter is grainier than commercially-sold snake bedding and can lead to impaction, if ingested. Since cat litter is absorbent, this can also cause dehydration.

Cat litter molds easily and contains a lot of dust. It’s often treated with chemicals or has artificial fragrances, which can cause respiratory issues.

The fine particles in cat litter can also get trapped underneath your snake’s scales, resulting in bruises and sores.

Walnut shell bedding is made of finely-ground walnut shells. They are easy to clean as your snake droppings can be easily be scooped out and thrown away. It also doesn’t clump up in the same way as sand.

However, ground walnuts do pose a risk of impaction. They don’t hold moisture well, and offer little in the way of odor control.

What Are The Best Substrates for Snakes by Species?

Different snakes have different substrate requirements. The following suggestions are based on the humidity and habitat requirements of the most popular pet snakes:

Corn snakes like substrates that allow them to dig and burrow. Owners like using aspen shavings as a substrate for corn snakes because it’s highly absorbent, fluffy and can hold its shape while a snake burrows through it.

If you want to use paper as a substrate to save money, try shredding it to pieces to create bedding that allows your snake to burrow.

Garter snakes are normally found around water sources, such as lakes, rivers, streams, and marshes. They have high humidity requirements, especially when they’re shedding. However, a garter snake’s enclosure should never be damp as this can cause blistering in their ventral region.

Aspen shavings, cypress mulch, and coconut husk bedding are among the best substrates for garter snakes. While paper towels and newspapers laid out flat are OK for baby garter snakes, they’re unsuitable for adults.

This is because garter snakes have high metabolisms and require more absorbent substrates in their enclosure. They also like to burrow, so be sure to fill the tank with 1 to 2 inches of substrate.

Boas are popular low-maintenance pets that can be kept on many different types of substrate. Newspaper, paper towels, carpeting, and aspen shavings are frequently used by boa constrictor breeders. You can use Cypress mulch, but note that this is a less common choice.

Mulch and other wood-based substrates tend to absorb moisture well, but in the case of boa constrictors, you want to make sure they don’t get too damp as this could increase the risk of getting scale rot.

If you are using carpet or aspen shavings, make sure that you spot clean regularly and do a complete change whenever needed. When using paper, you’ll have to replace the entire substrate every time you clean as paper has a low tolerance to moisture.

Ball pythons thrive in the warm, tropical regions of central and western Africa. Good substrates for ball pythons are newspapers and paper towels as you can quickly discard them and clean your snake’s enclosure.

Cypress mulch is a good choice, but they do tend to hold on to a lot of humidity. Be sure to keep moisture levels inside the enclosure in check. Too much moisture can be as much of an issue as too little moisture.

Kingsnakes aren’t arboreal (tree climbers), they’re burrowers. Cypress mulch and Aspen shavings are good choices for kingsnakes as they keep the snake comfortable while also allowing them to burrow.

Select a product that doesn’t contain any dust or fine particles. If the bedding doesn’t give off a strong smell and doesn’t pose a risk of impaction, it’ll be safe for your kingsnake.

There is no one-size-fits-all option when it comes to choosing the best bedding for snakes. All pet snakes have different requirements and preferences that must be accommodated.

MLA Style: Carter, Lou. "What Are The Best Substrates for Pet Snakes? (with Video)" Snakes For Pets, (January 21, 2021), https://www.snakesforpets.com/best-substrates-for-pet-snakes/.

APA Style: Carter, L. (January 21, 2021). What Are The Best Substrates for Pet Snakes? (with Video). Snakes For Pets. Retrieved January 21, 2021, from https://www.snakesforpets.com/best-substrates-for-pet-snakes/