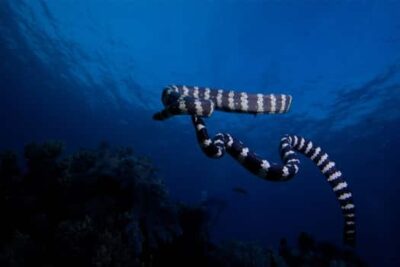 Black-banded sea kraits are a bluey-grey bodies with black stripes. They have a small geographic range, from the Philippines north to Taiwan and China.

They spend their lives underwater in their coral reef habitat. These snakes have a highly venomous bite, but they are shy and prefer to avoid confrontation with humans. Bites are rarely reported.

The black-banded sea krait has many names. Their scientific name is Laticauda semifasciata. Laticauda comes from the Greek for “broad tail,” while semifasciata is Latin for “half striped.

Because of their geographical range, the black-banded sea krait has names in different languages. These include:

The black-banded sea krait is a member of the Laticauda genus. These are exceptionally venomous snakes that can be found in coastal regions, particularly in the Southeast and East Asia.

There aren’t many predators, but they do face risks. When the females venture onto land to lay their eggs, masked palm civets may try and attack them. In the ocean, large sea birds or sharks can try to eat them.

When a predator approaches, they’ll hide, swim away, or sit still. Their coloration and indistinct markings help them hide against the background of the sea floor. Also, some predators mistake their tails for their heads.

The black-banded sea krait lives in coral reefs. They’re an aquatic, but not pelagic, sea snake. This means that they can live in water, but they can’t go out to sea—they have to stay near the shore.

That’s not because they need to come ashore, which they don’t. It’s because they can’t hunt in open waters. They aren’t fast enough to chase after fast-moving fish, despite being well-adapted to the ocean.

They, therefore, need to hunt for fish that are hiding in the coral, much like snakes on land that hunt for mammals in small burrows.

Where Do They Live?

Black-banded sea kraits share the same geographic range as many other sea snakes. They live on the shores of the Philippines, up north to Taiwan, and the coast of China.

The furthest northern extent of their range is around a group of small Japanese islands. They’re quite limited in that they need a coral reef habitat to survive.

However, according to PLoS One, they might be extending their range due to global warming. The scientists behind this study found a dozen of these snakes off the South Korean coast.

When their genetic origin was analyzed, they were found to have come from around the Ryukyu Islands, a group of Japanese islands to the south.

It’s thought that they were carried northward by the current, and were able to continue living and breeding further north because of ocean warming.

Sea snakes have adapted to life under the ocean. These adaptations help them mate, breed and hunt without needing to move on land.

The most obvious question is how do sea snakes breathe? Like other animals that live in the ocean but don’t have gills. They will periodically surface to breathe, approximately once every six hours. However, they have adaptations that help them stay underwater for long periods of time.

Not only that, but they form what are called ‘hunting alliances’ with other species. Along with yellow goatfish and bluefin trevally, they’ll flush prey out of hidden cracks and crevices of coral reefs.

When they breed, black-banded sea kraits breed close to the shore. They never venture far out to sea—unless they’re dying, and are carried out by ocean currents—and they almost never head onto land either.

As such, they’ll find a secluded spot like a gap in the coral reef or a small cave to mate. These areas give them some much-needed privacy, since mating can take hours.

Unlike many other sea snakes, they do lay eggs (others give birth to live young). Females only lay between three and seven eggs per clutch, which isn’t many for a snake.

The female heads out onto land to lay them. The eggs take about five months to hatch. The mother doesn’t protect them during this time; she heads off to find food and carry on living her life.

According to Zoological Studies, the black-banded sea krait has a limited diet of fish.

A group of scientists caught and killed more than 200 snakes to dissect them and find out what they’d been eating. They found that only one third, about 70 of the snakes had anything in their stomachs.

Of those snakes, the diet varied based on both age and sex. Young specimens were found to have eaten nothing but sand perches, which are the right size for them.

Adult species feed on damselfishes and clownfish, blue tangs, and rovers. Each of these species is common in the same coral reef habitat as the black-banded sea krait.

Having a limited diet is common for snakes. Most sea snake species have highly specialized diets. Some only feed on one or two families of fish, while others only eat eels, and others still just eat fish eggs.

Scientists think that this is to avoid competition with other snakes, so that many different species can thrive. So while the black-banded sea krait wouldn’t have a varied diet for a human, they do for a sea snake.

The scientists also found that males tended to eat a wider variety of food, although they weren’t sure why. What they did suggest was that these snakes were relatively normal for their family, in that they ate large meals, infrequently. Snakes are renowned for this.

While about 70% of the snakes in this study had empty stomachs, lizards, for example, only have empty stomachs in 13% of specimens. The group also found that snakes found in caves had empty stomachs even more frequently, backing up the idea that these locations were used for mating rather than digesting.

Because they have a smaller range, and specific habitat needs, they’re classed as ‘near threatened’ by the IUCN. They listed many potential threats to the species, including:

There are protected areas that they live in so, even if the worst happened, they should still have some habitat left.

Black-banded sea kraits are nocturnal snakes. Even if you go diving around their natural habitat, you’re unlikely to see them. You’re much more likely to encounter other sea snakes like the yellow-bellied sea snake.

If they see you coming, their first instinct will be to hide. They’ll try and find a small crack in the coral reef to hide in, or a small cave. Failing that, they might try and remain immobile, hoping that you won’t spot them. If they’re in the water, and they feel that you aren’t fast enough to catch them, then they’ll swim away.

It’s odd behavior for such a venomous snake, but it makes sense when you think about it. You’re far bigger than they are, and they’re not used to seeing anything like you.

So, when you approach them, they think you’re probably going to eat them. The scientists from the study linked above put it best: “…the remarkable docility of these highly venomous snakes remains puzzling.” It’s as if they don’t know that they’re one of the most venomous snakes on earth and could easily kill you.

Black-banded sea kraits are very venomous. Their venom is more toxic than a king cobra. The reason why we don’t hear more about them is that we only rarely encounter them, since they live out at sea.

Black-banded sea kraits, like most other sea snakes, have very small fangs. They’re a quarter of an inch long.

That might surprise you—after all one of the most common venomous snakes in the U.S., the rattlesnake, can have fangs up to 4-6 inches long.

So, why does one of the most venomous snakes has such short fangs? There’s no need for them to have longer fangs. Sea snakes eat small fish. If a black-banded sea krait had three-inch-long fangs, then it would be much more awkward to bite them since some fish can be so thin.

Not only that, but the longer the fang, the more likely it is to break. That’s not a good thing, because it means the snake can’t eat for however long it takes the tooth to grow back. Like all snakes, they can bite you underwater.

Plus, rattlesnakes can have such long fangs because they use special hinges to fold them back into their mouth when it’s closed. Black-banded sea krait fangs are fixed in place, which means that the fangs would scratch and pierce their way through their lower jaw if they were any longer.

Scientists have figured out how toxic black-banded sea kraits are by testing their venom in laboratory experiments.

Results for the black-banded sea krait are between 0.11mg/kg and 0.2mg/kg. Given that the average weight of an adult is 62kg, these results suggest you would need between 6.82mg and 12.4mg to kill a person.

They used a test that finds the ‘median lethal dose,’ or LD50—an amount required to kill 50 out of 100 test subjects.

It’s measured in mg/kg, which means how many milligrams of venom per kilogram of bodyweight you need to kill an animal. So, for example, if the necessary dose were 1mg/kg, then you would need 8mg to kill an 8kg animal.

Different studies tend to return different results, which is due to many factors. The necessary dose depends on where you inject it—directly into the bloodstream, into muscle tissue, or just under the skin. Not only that, but different animals can survive more venom than others.

What Are the Effects of Snake Venom?

Their venom is both neurotoxic and myotoxic. This means it attacks both the nervous system and the muscles. Myotoxins are found in snake and lizard venoms, and they break down muscle tissue quickly.

If enough venom is used, it causes instantaneous paralysis (the point of which is to stop prey from escaping). It causes death by preventing the lungs from being able to breathe. Myotoxins are common in rattlesnake venoms, which is where they were first found.

Neurotoxins essentially coat these receptors, which means that the brain can’t communicate with the body anymore. This has the same effect as mycotoxins, in that it stops the lungs from breathing and the heart from beating.

Can a Black-Banded Sea Snake Kill You?

So, their venom is potent enough to kill you. In the unlikely event that one did attack you, there are a couple of reasons why they still might not be able to kill you.

They’d struggle to bite your round limbs. Sea kraits have quite small mouths and fangs even for their size, which makes it difficult for them to bite through a scuba suit or any thick clothing.

There has never been a confirmed case of a human fatality from a black-banded sea krait’s bite.