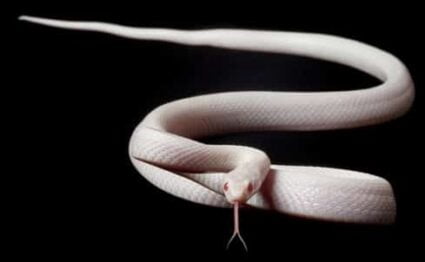 Breeders have been trying to create pure white corns, such as the blizzard corn snake, for years. Because of their striking appearance, they’re a popular choice of pet snake and can command a much higher price.

This designer morph is bred from albinos and charcoal/anerythristic B corn snakes. Both morphs are recessive, which means that combining the albino and anery genetics will produce 100% blizzard offspring. Blizzards are pure white, but may yellow slightly as they get older.

The blizzard corn snake has a stunning appearance and is easy to breed. And since it’s less common, it’s ideal for any breeder. So, let’s look at everything from what they look like, to how you breed them.

What is a Blizzard Corn Snake?

Blizzards are the result of a charcoal and amelanistic (albino) breeding pair. Every offspring of this pairing will be a blizzard.

Blizzards got their name due to their pure white color. When you look at some ‘supposedly’ pure white snakes, they have a tinge of yellow.

This morph may mature to be solid white. They are white all over, like snows. However, they may develop a light yellow or pink pattern as they get older. They also have red eyes as they’re bred from albinos.

They look this way because of their genes. The albino corn snake lacks melanin, hence the term ‘amelanistic.’ Without melanin in its scales/skin, they lack the dark pigments in their pattern. That’s why albinos lack the deep red and black color.

Charcoal corns, or anery/anerythristic B corn snakes, lack yellow markings. When you combine a lack of light color and a lack of dark color, you’re left with no color at all. That’s why blizzards are pure white.

Some blizzards appear slightly pink all over because of their blood. They are such a bright white that the color of their blood shows through.

Blizzards are even whiter than snows. They don’t usually have the yellow, pink, or green tinge that you might find on some snow corns.

Snows are a candy-colored pink when they hatch. They have clear markings, which are a lighter pink, but are easy to distinguish. As they age, their pink mellows into a yellow color. They also have bright yellow faces.

Snow corns are the result of breeding an albino with an anerythristic type A morph. Type A anerys look a lot like type B anerys. The main difference is that type A has a higher contrast pattern.

A corn’s DNA dictates what it will look like. Usually, this is dictated by whatever is an advantage to them in the wild. For example, corn snakes look like copperheads, which gives them a survival advantage in the wild.

But occasionally, a mutation will occur. Mutations are natural and common, and may or may not be advantageous. Albinos and charcoals are both examples of these natural mutations.

Snake genetics is big business. Breeders create unique morphs by finding them in the wild, or by breeding two existing morphs together. But it’s not as simple as having any two snakes mate. That’s because genes can be unpredictable if you don’t fully understand how they work.

How Do Snake Genetics Work?

There are three kinds of genes: dominant, co-dominant, and recessive. This describes how genes interact with each other:

Even if a snake has a specific gene, e.g. the albino gene, it might not show. If a gene is recessive, but the snake also has a dominant gene, then it won’t affect its appearance. They are still a carrier of that gene, though.

When a snake has one copy of a gene, whether it’s expressed or not, they are ‘heterozygous’ for that gene. That means that they have two different copies of a particular gene. Depending on whether they’re recessive, co-dom, or dominant, they will interact differently.

The alternative to heterozygous is homozygous. This term means that the snake got the same gene from its mother as it got from its father. If it inherited a pair of albino genes, they are expressed.

Both albinos and charcoals are homozygous for their respective morphs. They have to be, as they’re recessive genes. The blizzard is heterozygous as it has one copy of the albino gene and one copy of the charcoal gene.

What Genes Does a Blizzard Corn Snake Have?

The blizzard is heterozygous for both albino and charcoal. This means that it inherits the albino gene from one parent and the charcoal gene from the other parent. The parent the genes come from is irrelevant.

When a snake has two recessive genes, they act like co-dominant genes. This means both are expressed. The blizzard mixes the albino’s lack of dark pigment with the charcoal’s lack of color.

According to Scientific Reports, albinos have a gene changed that means that they lack melanin. Melanin is a pigment that appears in many animals. It can be part of skin or hair. The less melanin you have in your skin, the lighter you are. Its function is to protect you from UV rays.

Charcoals lack the pigment that’s responsible for the color yellow. This causes them to appear nothing but dark-colored. There are different kinds of anerythristic snakes, some of which have greater dark contrasts.

When expressed together, the snake lacks color pigments and dark pigments. They have no pigment, so their skin is plain white.

Some breeders make their living from breeding designer morphs, like blizzards, to other designer morphs. They often create morphs that are one of a kind, i.e. no other breeder has made them to this point.

Tesseras are like normal corns, aside from their pattern. Where a normal has saddle markings, a tessera has a broken and blotchy pattern. It almost looks pixelated. They usually also have a stripe running along their backs.

The tessera gene is a dominant gene. It will be expressed instead of a recessive gene. However, when a blizzard is bred with a tessera, the blizzard keeps its light color.

That’s because the tessera gene is for pattern, not color. The albino and anery type B genes code for color pigments. The tessera gene doesn’t. You can have a blizzard appearance and tessera pattern.

How to Make a Blizzard Corn Snake

To breed a blizzard, you need a charcoal and an albino breeding pair. Breeding blizzards is much simpler than breeding other designer morphs. That’s because 100% of this pair’s offspring will be blizzards.

Albinos and charcoals are ‘homozygous’ for their genes. They each have a pair of their respective genes. For an albino to look like an albino, it needs an albino gene from its mother and father.

The two genes an albino can pass on are both albinoes. Of the twp genes that the charcoal can pass on, both are charcoal (anerythristic B). So, the offspring will have one albino and one charcoal gene—and be a blizzard.

You can also create blizzards through snakes that are heterozygous, or ‘het,’ for albino and charcoal. This means, if they have one albino or charcoal gene and one normal appearance gene, the snake will appear normal.

There are several kinds of anerythristic corn snake. When bred with other morphs, they create different results. They look and age differently.

These corns are similar to albinos in that they lack certain pigments. They have a recessive mutation where they lack erythrin (red, yellow, and orange) pigments.

This produces a snake that is mostly black, gray and brown. As they grow older, they develop yellow on their neck regions due to their diet.

These are known as charcoals. They look similar to type A snakes, but with less of a contrast between their light and dark colors.

While these are considered anerythristic by some, they don’t look like types A and B. They are a rusty red color with distinctive saddle borders. Their saddles are a fiery red or orange.

How to Breed a Blizzard Corn Snake

You can only get blizzards by breeding an albino with a type B anerythristic, or charcoal. Nothing else will work.

Take type A, for example. If you breed one to an albino, the result will be a snow. While the snake is light, it’s not as light as a blizzard. However, you can use any albino as they are all the same.

If you would like a thorough guide on temperatures, humidity, and breeding, check our full corn snake breeding guide. It details everything you need to know to breed corn snakes successfully.