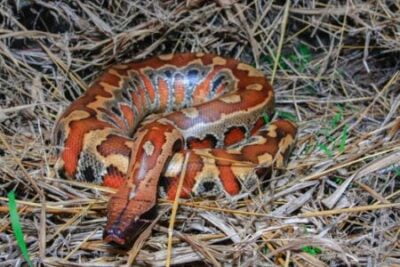 Blood pythons (Python curtus or Python brongersmai) are snake species from southeast Asia. They are beautiful to look at. They are known especially for their blood-red color, which is what initially drew people to own them, and is how they get their name.

Blood pythons are known for being nippy, hissing, and getting cage aggressive. They musk easily when handled. Their bite reflex is very strong, and their jaws are strong too. However, their reputation comes from wild-caught specimens. Captive-bred blood pythons aren’t anywhere close to as defensive.

Negative reactions mainly occur from handling blood pythons. That’s when they musk and get the most defensive. The worst thing is their bite, which is much more painful than that of other types of snakes.

Temperament of a Blood Python

One of the reasons blood pythons aren’t more popular is their temperament. Most owners will tell you that blood pythons are difficult to care for. They get defensive, and may attack when you’ve done nothing to provoke them. Blood pythons musk, hiss, and can be nippy.

However, this reputation isn’t a fair reflection of all blood pythons. Today’s specimens are captive-bred. They have been socialized from the moment they hatched, so they are far less defensive and nippy.

Blood pythons also renowned for not eating frozen and thawed food. Again, that’s due to the fact that they were wild-caught. They have spent their entire life eating live or freshly-killed prey. They don’t recognize dead prey as food. But this applies to any snake, not just blood pythons.

Why Do Blood Pythons Have Bad Temperament?

Their reputation comes from most specimens being wild-caught, not captive-bred. Wild-caught snakes aren’t used to people and see humans as a threat. That’s because they’ve lived in the wild, where predators and threats could kill them at any moment.

As much as owners treat their pets well, the people who catch blood pythons may not have done so. They will catch the snake and travel with it in unsafe, improper conditions. They may then keep the snake with other snakes, and it may get an infestation or infection.

According to the Wiley Online Library, most wild-caught snakes have parasites. They found that 88% of snakes had endoparasites, i.e. parasites inside their body.

When the snake is shipped to the U.S., it won’t be happy. It will be sent in a package that is jostled and hit by other packages along the way. The snake may be too cold, especially if it’s shipped in the cargo of a plane.

All of this contributes to a higher rate of snakes dying before they reach their destination. It’s little wonder that they are tetchy and nippy after such a bad experience. None of this applies to captive-bred blood pythons.

All snakes bite if they feel the need to. The first reason is to feed. Every snake needs to bite to feed, except for egg-eating snakes. This biting response is triggered by hunger and the presence of food.

Snakes also bite in self-defense. These bites are different from feeding-response bites. When a python bites prey, it bites and holds on. But self-defense bites are bite-and-release. The idea is to give you a shock.

Snakes will try to scare you away before fully biting. They will do so by bumping you with their nose. They will strike at you quickly, as if they’re going to bite, but not open their mouth.

They feed on live mammals and birds in the wild, and need to bite in order to constrict. Their feeding reflex is surprisingly fast for their size, and catches people out. Aggressive specimens may bite and refuse to let go.

Do Blood Pythons Have Fangs?

Blood pythons do have fangs. You may not see them as they’re hidden by gums. You may spot what look like tiny teeth poking out. The teeth are longer than that, and you may see them through their translucent gums.

Fangs are used to hold onto prey and prevent it from escaping. Without fangs, the prey could wriggle free before constriction starts. Blood pythons have lots of teeth along the sides of their mouth, not just two big fangs.

Blood pythons are a constrictor snake, so they aren’t in the least bit venomous. They wrap around their prey and squeeze it until its heart stops.

Blood pythons cannot even produce venom. Venomous snakes have venom glands, or at least a venomous saliva-producing Duvernoy’s gland. They have venom ducts to connect the glands to their fangs, and hollow or grooved fangs to deliver the venom.

Blood pythons (and all pythons) lack all of these things. They have no venom glands and no venom ducts. They lack long and hollow fangs, and instead have short, backward-pointing teeth to grip onto prey.

So, even if they wanted to hurt you, a blood python can’t do so with venom.

Does a Blood Python Bite Hurt?

The teeth of a blood python are sharp and pointy, so they will create a series of small puncture wounds along with the bite. Their bite hurts much more than ball pythons or corn snakes, for example.

Because they’re so tenacious, and frequently don’t let go of their bite, they can cause real damage. But what makes their bites especially painful is their biting reflex. Every species’ biting reflex differs, with some striking faster than others.

Blood pythons are ambush hunters, which means they sit still and wait for prey to come to them. They have to strike quickly, and they can, even though they’re large. The bigger the blood python, the more painful the bite.

Another aspect of their temperament is their cage-aggressive nature. This is where the snake is defensive when you move to reach in their cage.

This occurs because the snake feels cornered, and that it needs to fight you off. A snake in the wild, stuck in a hollow log or a burrow, would have to fight off any threat that’s near the entrance. If it didn’t, it would be eaten.

As blood pythons are aggressive, cage aggression is not unusual. You can avoid this by lifting the snake from their enclosure with a snake hook.

Blood pythons can musk when handled, which is another reason they don’t make a good beginner pet. Musk is a foul-smelling fluid expelled from the cloaca. The active ingredient is produced by the cloacal scent gland.

This is another reason why handling a blood python can be unpleasant. They will almost always musk when handled, even if captive-bred. It’s something you have to get used to if you want to handle one.

Why Do Blood Pythons Musk?

Musking is a response to threats. The purpose is to deter predators from wanting to eat the snake, because it smells and tastes foul.

They will musk, especially when encountering a low-level threat. If they don’t feel frightened enough to try self-defense, they will start by musking, and perhaps by getting aggressive. The predator won’t want to eat them because they are covered in feces, urine, and a disgusting scent.

You still have to be careful to avoid the blood python’s bite. Whether captive-bred or not, the snake still possesses powerful jaws.