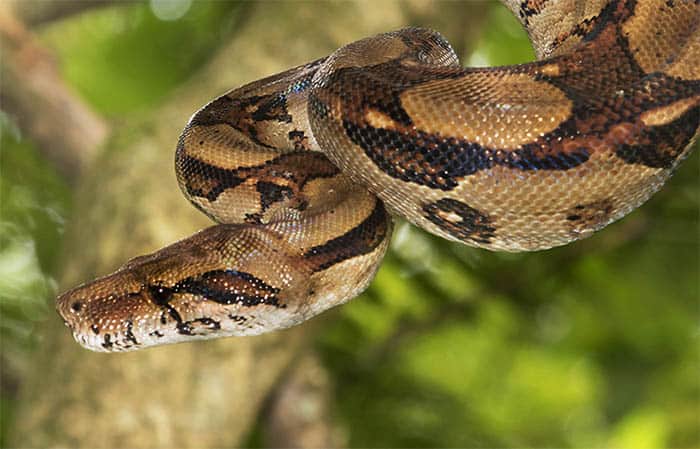 Boa constrictors are common in the tropical regions of Central and South America. If you have an interest in boas, you may have come across the terms “common boa,” “Colombian boa,” “red-tailed boa,” “BCI” and “BCC.” But what do these different names mean?

True red-tailed boas are larger, lighter in color, and have more vivid red tails than the boa constrictor imperator.

We’re going to look at boas and explain all of the different subspecies. We’ll also explore the main differences between the Boa constrictor imperator and Boa constrictor constrictor so that you can tell them apart.

What Are Boa Constrictors?

Boa constrictors are a large, non-venomous snake native to the Americas. They are famous for their method of killing prey: constricting animals until they die from restricted blood flow.

The geographical range of the boa constrictor extends from the southern parts of Mexico, in North America, down to Argentina in South America. They can be recognized by:

Boa constrictors mainly hunt small mammals and birds, and occasionally reptiles such as lizards. Though they are often feared as dangerous, man-eating snakes, they usually do not grow large enough to prey upon humans.

What Types of Boa Constrictor Are There?

There are 10 subspecies of the boa constrictor. Let’s take a brief look at the different subspecies and what distinguishes them from each other.

They are found commonly across the northern parts of South America, including Brazil, Guyana, Suriname, Venezuela, and Peru. Though they are the archetypal boa constrictor, they are less widespread than Boa constrictor imperator.

Boa constrictor constrictors are elusive and sought-after in the pet trade. When they do go up for sale, they are usually at least $200-$300 each.

Boa constrictor imperator is also referred to as Boa imperator. This is because there is some debate between herpetologists as to whether they should be categorized as a subspecies of Boa constrictor, or a separate species altogether.

They are the most widespread subspecies of boa constrictor, occurring in most of Central America, the south of Mexico, parts of South America, and many small islands surrounding Central America (such as the Corn Islands).

They are very similar to true red-tailed boas, with some noticeable physical differences, which we will examine shortly.

Boa constrictor imperators are the most popular boa bred and kept in the pet trade. They have also been selectively bred for unique colors and patterns, known as “morphs.”

Normal-colored common boas can sell for as little as $75 each. Morphs are typically more expensive.

As well as the two main species of boa constrictor, there are eight species (and many subspecies) of lesser-known boa constrictor. These are confined to specific geographic locations, and not much has been scientifically documented about them. They are as follows:

Not much is known about these subspecies outside their geographical area, and they are rarely bred in captivity (other than at zoological parks).

What’s The Difference Between The Boa Constrictor Imperator and the Common Boa?

The term “common boa” is often used as a nickname for both types of boa constrictor. Which species deserves the title of “common boa” comes down to a matter of individual opinion.

Some herpetologists claim that “common boa” should only refer to the nominate subspecies, Boa constrictor constrictor because it was the first species of boa constrictor to be identified and described.

Others argue that because boa constrictor imperators are more common, and have a wider geographical range, they are more deserving of the nickname “common boa.”

True red-tailed boas generally grow to be significantly bigger than common boas. Adult red-tailed boas commonly attain 9 to 10 feet in length and have been known to reach 13 and 14 feet.

Common boas, on the other hand, usually remain 6 to 8 feet long, although they have been known to reach 12 feet in rare circumstances. Juveniles are usually similarly sized.

Common boas and true red-tailed boas have reddish-brown saddle-shaped markings along their backs. However, these markings are not identical in shape. Common boas tend to have smoother, more rounded saddles.

The saddles of a true red-tailed boa have distinct “widow’s peaks” in the middle, making them look almost like the shape of a sideways batman symbol. They also tend to have fewer saddles.

True red-tailed boas and common boas in their “natural” coloration both have much larger saddles on their tails, making their tails appear red in color.

This is why you’ll occasionally see common boas referred to as red-tailed boas, despite being a different species. However, the tails of common boas tend to be almost a mahogany brown color. True red-tailed boas have very vivid red tails that stand out against their paler background color.

Juvenile boa constrictors have similar head shapes, but after 1 year, the differences between the two species start to become apparent. True red-tailed boas have longer and more pointed snouts than common boas. Their necks are also thinner, making their heads seem larger by comparison.