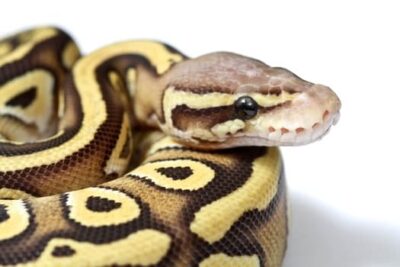 Butter ball pythons were first bred and imported in 2001 by Reptile Industries/ReptMart. They then put them through a breeding program to prove that the butter ball’s appearance is hereditary.

A butter ball python is a co-dominant morph that has yellow markings and a caramel-brown background. Their genetics make their dark colors lighter than normal. They can be bred with others to create designer morphs. Examples include butter Enchis, butter albinos, and blue-eyed Lucy’s. Prices vary based on the relative scarcity.

Aside from the coloration, butter balls are exactly the same as other ball pythons. Males will reach 2-4 feet and weigh between 1300 and 1700g. Females are bigger, between 4 and 5 feet long, and weighing 1400-1900g. The female snakes are larger due to sexual dimorphism.

The most obvious physical characteristic of a butter ball python is its color. A ‘normal’ has a deep brown color as a background. Butter balls can be identified in the following way:

Ball pythons can have 3 different kinds of genes:

This difference determines what the animal looks like. It also determines how likely the animal’s offspring will look like it. Base morphs (those caught in the wild) have natural mutations. Designer morphs are the result of breeding two base morphs together.

Is the Butter Gene Dominant, Co-Dominant or Recessive?

The same applies to the genes that give the butter ball python its unique appearance. When you breed it with other morphs, both the butter gene and the other gene are expressed. That applies to co-dominant, recessive, and dominant morph genes.

This makes butters a good snake to breed with others. When you do, you mix the butter ball appearance with the appearance of other morphs. This is what makes interesting designer morphs.

Are Butter and Lesser Ball Pythons the Same?

Most people believe they are different lines of the same morph. That’s because their color and pattern are similar. And when you breed designer morphs using these morphs, the result is usually the same.

This variance occurs because the butter gene is co-dominant. A butter ball python can only have one copy of the butter gene. If it had two, both would be expressed due to co-dominance, and the snake would be a BEL.

Every butter ball python also has a copy of the normal appearance gene. When you breed two butters together, there’s a 50% chance that each parent will pass on its normal gene, not the butter gene. The chance of both of them doing so is 25%.

You can also breed BELs with butters. This results in 50% butters and 50% BEL offspring. This is the better way to breed as you get more valuable snakes (BELs), and no normal.

Because the butter ball python has been around since 2001, it has been bred into many designer morphs. Below is a table with examples of the kinds of designer morphs you can find. Afterwards, we will look at each in more depth.

These aren’t the only morphs. You can breed a butter with any other morph you like, but these are the best-known varieties.

Pastels are a popular morph to breed. That’s because the color and pattern of the morph they’re bred with are accentuated and made ‘cleaner’. They’re also popular because they’re more common.

But, because they’re variable, the changes aren’t always noticeable. If you don’t have a regular butter to compare with, it’s difficult to tell them apart.

Super pastels have extreme yellows and a clean pattern. Their dark pattern is still dark like a normal. This creates a high-contrast pattern and appearance. They also have extensive blushing.

In some cases, the snake is exceptionally light-colored. They are almost yellow like a banana ball python, but still have some brown pattern on top. In other cases, the snake’s dark pattern borders on black.

When you breed a butter and a Mojave together, you’ll get a BEL (Blue-Eyed Lucy). This was one of the first highly desirable designer morphs because of its unique color.

The BEL is pure white. When people think of albinos, they think they’re pale and white. But in ball pythons, they aren’t. They have high contrast yellow and white scales, and red eyes.

BELs are what people imagine when you talk about albinos. They’re a pure white with a slight blue-silver tinge. They are a uniform white from head to tail tip. They may turn a faint yellow as they age.

The most interesting thing is their clear, sharp blue eyes. That’s where they get their name from. Their eyes range from a bright blue to a darker blue, to a dark blue surrounded by black. You can also get black-eyed leucistics.

The lithium ball python is bred from the butter and cinnamon morphs. Cinnamon, like butter, is co-dominant. Cinnamons have a browner background color, and their heads are browner too.

They also have a distinctive pattern. Ball pythons have a pattern that’s described as being like an ‘alien head’. This is where they have loops along their sides with two ‘eyes’ in each. The effect looks like a little green man’s head.

With cinnamons, these alien head loops may be squashed or smeared together in appearance. They may also have just one ‘eye’ instead of two. The head may also be heart-shaped rather than ‘head’ shaped.

The lithium ball python has each of these features. Their background black is a uniform brown. It may appear sandy brown in some cases. Their pattern changes too to look like the cinnamon.

The albino butter ball python is a mixture of the recessive albino gene, and the butter gene. Because the butter gene is co-dominant, both genes can be expressed.

Like regular albinos, the albino butter has red eyes. This is common to any snake that shares the albino gene. They are a bright orange-yellow color.

But unlike regular albinos, they have no clear white background pattern. Instead, they are two different shades of orange-yellow. Their darker pattern is only slightly darker than the background.

They also have noticeable white outlines around their pattern. In all other ways, their pattern is the same as a normal ball python.

The black pastel is similar to cinnamon ball pythons in appearance. They are high-contrast, with a distinct dark black-brown background color. They have a golden or rust-colored light pattern. Like cinnamons, their pattern is different from a normal, too.

Black pastel butter ball pythons are gorgeous to look at. They have the same reduced pattern as black pastels, where their markings are striped, broken and/or reduced. They may also have a dorsal stripe, i.e. along their back.

But it’s their color that sets them apart. On the top of their back, they’re a deep dark brown. This fades into white as you move down their sides.

Butter Enchi ball pythons are a mix of butter and Enchi genes. Enchis are ball pythons that have accentuated yellow colors as part of their pattern. They are popular with breeders that want to create light-colored snakes.

The Enchi’s pattern also shows through in the butter Enchi. The pattern gives them a broken dorsal stripe in a lighter color. Their ‘alien head’ loops along their sides don’t have eyes.

Morphs cost more than normal snakes due to their relative scarcity. However, designer morphs are more expensive than basic morphs.

Basic morphs are those that are wild-occurring. Butter ball pythons fall under this category, so the more common specimens are relatively affordable. The other kinds are designer morphs, where 2 different morphs are bred together. These don’t occur naturally in the wild.