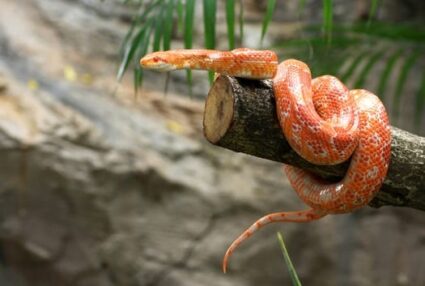 Snakes that are born in captivity differ considerably from wild snakes. Escaped or unwanted pet snakes will rarely flourish in the wild, and may adversely affect the local ecosystem in some cases.

Wild snakes are native to particular territories, needing certain climates to flourish. Unsuitable outdoor elements, such as low temperatures and humidity, will kill a captive-bred snake quickly. Pet snakes are used to being hand-fed, which blunts their hunting instinct. Captive snakes are regularly bred to produce eye-catching colors, which makes them significantly easier for predators to find and eat.

In most cases, releasing a captive snake will end badly, but there are certain exceptions, such as the Burmese python. This is an invasive species of snake that has done enormous harm to Florida’s ecosystem. More often, a pet snake will quickly succumb to illness, cold weather, or predation.

Can Pet Snake Live Outside?

It is possible that a pet snake will survive in the wild, at least for a while. Snakes are skilled at hiding and remaining out of sight. Snakes can also go some time without food. So, if a pet snake escapes, it can stay alive until found and returned home. Take steps to find a missing pet snake.

Releasing a captive snake into the wild is a different story. This is a cruel and irresponsible act. Wild snakes face a range of insurmountable challenges. Snakes born in their natural habitat quickly learn how to negotiate these trials. Captive snakes are ill-equipped for life in the wild.

Even if the snake survives, it can become a significant problem. Take the example of the Burmese python population of the Florida Everglades. These pythons were popular pets in the 1970s. When they grew too large to contain, owners released their snakes into the wild.

The Everglades offer a climate that appeals to the Burmese python. As confirmed by Florida Scientist, the snake quickly started to reproduce. Burmese pythons are now an invasive species in the territory, feeding on native species of animals and drastically altering the eco-system.

The flourishing of Burmese pythons is very much an exception to the rule. Most pet snakes will not survive in the wild for four reasons.

The primary concern for pet snakes in the wild is the climate. Snakes need particular temperatures to survive. This is why certain breeds of snake are native to particular territories around the world.

As snakes are cold-blooded (ectothermic), they rely on being able to draw warmth from external sources. This is why we use heat lamps in a pet snake’s enclosure. Snakes will need to rely on the rays of the sun.

For nocturnal snakes, they will need to adjust their entire natural routine. In addition, it involves basking in the sun for prolonged periods. This leaves the snake extremely vulnerable, exposed to predators.

A snake that is too cold will not necessarily freeze to death. However, it will become increasingly lethargic and sluggish. This will make it harder for the snake to protect itself.

In addition, snakes rely on warmth to metabolize food. When a snake becomes overly cold, it cannot digest. If a snake eats a mouse, for example, it will swallow it whole. The mouse will gradually be digested in the snake’s stomach.

At the right temperature, this is fine. If the snake is cold, food will decompose within the digestive tract due to a slow metabolism. The buildup of internal bacteria is likely to kill or make the snake very sick.

It takes snakes a long time to starve. Finding a food source will not be a captive snake’s first concern upon being released.

Captive snakes can be picky eaters. A pet may have grown accustomed to a particular meal, such as mice. If rodents are not readily available, the snake may struggle to adjust its expectations.

Even if mice to roam in the wild territory, they will obviously be alive. A pet snake would have been fed frozen-thawed mice. Being scratched and bitten as the mouse fights for its life will be a new experience.

The snake will also need to hunt. Wild snakes learn this skill this early in life. Captive snakes still have the instinct to feed, but they face competition for food in the wild. If the snake doesn’t act quickly, it will struggle to eat.

Many smaller breeds of snake are comparatively low on the food chain. Some of the wild animals that will look to eat a pet snake include:

The snake could theoretically hide from predators. The question is, how and where? Pet snakes will struggle to disguise themselves while seeking shelter. Many pet snakes are morphs, bred especially for aesthetic appeal. Wild snakes have evolved to camouflage themselves. A snake with unique patterns will stand out and soon be captured.

Even snakes that resemble venomous counterparts are not safe. Several harmless breeds of snake, most notably the scarlet kingsnake, resemble the deadly coral snake. This is an act of evolution, known as Batesian mimicry. Resembling a venomous snake deters predators.

As Nature explains, these snakes are only protected in territory occupied by the coral snake. If predators do not know that the coral snake is dangerous, why fear an imitator? Unless you live in the southeast, black-and-red markings will not save a snake’s life.

If your snake avoids the attention of predators, sickness remains a constant risk. Wild snakes eat wild prey, leaving them subject to a wide range of infections (bacterial, fungal, and viral) and physical ailments.

Snakes in the wild will be subjected to a range of harmful bacteria. The most common outcome of this is ulcerative dermatitis, or scale rot. This is found in bacteria in the ground and water a snake will hide within.

Scale rot will break open the skin of a snake. As explained by Veterinary Clinics of North America, this exposes the snake to a range of other health concerns. The snake will no longer have its skin as a protective barrier against the elements.

Infectious stomatitis (mouth rot) is another concern, passed on through bacteria. If a snake has a sore mouth, it will be unable to feed. While snakes can go prolonged periods without eating, it will eventually need sustenance. Oral discomfort may also leave a snake unable to defend itself.

Snakes can be prone to intestinal worms. These are found in the prey of a snake, in addition to water sources. A wild snake will not have access to worming treatments that you can provide in captivity.

Snakes with intestinal worms may appear to be unaffected, but will likely move towards a snake’s lungs. Eventually, this will result in mortality.

The common snake mite is known as ophionyssus natricis lives and feeds upon reptiles. Snakes could be exposed to mites by other snakes, alligators, turtles, and lizards.

Once mites infest a wild snake, they can be difficult to remove. The mites will burrow into a snake’s scales, looking for softer flesh. Oftentimes, they settle around the eyes and glands. From there, the mites will bite and feed on the snake’s blood.

Eventually, this will prove fatal for a snake trapped in the wild. The mites will previously have fed from other sources and may pass on diseases. If not, this constant feeding on blood will lead to anemia.

A tick may transfer from mammal to snake. This leads to the risk of disease and infection. Rodents, in particular, carry a range of sicknesses. Austral Ecology explains how ticks attach to snakes in woodland areas most often. An escaped or released captive snake will often see shelter in forestry.

If you can no longer care for a snake, do not release it. You risk putting the snake in peril. If it survives, the snake will disrupt nature’s food chain. Either sell your pet snake, or speak to a reptile rescue center and have your snake adopted.

1 thought on “Can a Pet Snake Survive in the Wild?”