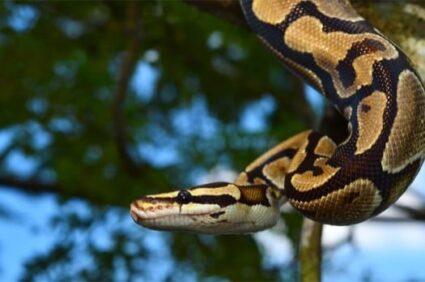 Although ball pythons don’t have visible ears, they can still hear. However, ball pythons have a limited hearing range, and detect sound in a completely different way to humans.

Ball pythons use their vibration-sensitive hearing to detect oncoming predators. It’s unlikely that they use their hearing to communicate with other snakes. Ball pythons can’t even hear themselves hiss, because the noise is too high-pitched.

How Do Ball Pythons Hear?

It’s a common misconception that ball pythons are deaf. This is probably because snakes don’t have any visible ears.

Many reptiles have external ear openings, which look like holes in the side of the head. However, ball pythons and other snakes don’t have these. They also lack a tympanic membrane (eardrum).

But this does not mean that ball pythons are completely deaf. They can’t hear as well as humans, but they do have a limited auditory range. This allows them to detect loud sounds in a nearby area, and warns them of danger.

According to the Journal of Experimental Biology, ball pythons pick up ground-borne vibrations using their skull. Vibrations travel through the ground into their lower jaw, then pass through a bone into the inner ear.

Ball pythons can hear some airborne sound, but poorly. If an airborne sound is loud and low-pitched enough, it will cause the snake’s skull to vibrate. These vibrations are processed in the same way as ground-borne ones.

This means that ball pythons hear airborne sounds as vibrations or rumbles. They can’t hear clearly, or distinguish where any particular noise comes from.

In other vertebrates, sound waves travel through the outer ear and eardrum to the inner ear (inside the head). While ball pythons do have an inner ear, they lack eardrums and outer ears. So, they rely on a different mechanism.

This causes a small bone called the quadrate, located at the back of the jaw, to vibrate. And the quadrate is connected to the columella, a bone inside the inner ear.

When a vibration passes through the columella, it reaches the cochlea, a spiral-shaped cavity inside the inner ear. The cochlea turns the vibration into a nerve impulse, and sends this impulse to the sound-processing part of the brain.

This allows ball pythons to “hear” vibrations. They can detect that something is making a noise, and roughly which direction it’s coming from. But they can’t distinguish the intricacies of different sounds. They’re also limited to hearing low-pitched tones, such as bass notes.

How Well Can Ball Pythons Hear?

Studies have shown that ball pythons have a hearing range between 80 Hz and 1,000 Hz. They are most sensitive to low-pitched frequencies, between 80 and 160 Hz. For reference, a human’s hearing ranges from 20 Hz to 20,000 Hz. So, they can’t hear most of the noises that we can.

Even low-pitched sounds must be loud enough to create vibrations for a ball python to hear them. Ball pythons can’t hear quiet noises and most airborne sounds. If it doesn’t cause their skull to vibrate, it’s effectively silent.

Scientists don’t know exactly what ball pythons use their limited hearing for. According to the Journal of Experimental Biology, burrowing sand vipers use vibrations in the earth to detect prey. They can sense what direction the sound is coming from, and this helps them locate prey.

But ball pythons hunt above ground. They have specialized infrared-sensing pits above their lips for detecting their prey’s body heat. It’s unlikely that a ball python would use its hearing to find food.

They also can’t use their hearing to communicate with other snakes. A snake’s hiss is generally above 2,500 Hz, so it’s outside the range of ball python hearing.

It’s more likely that ball pythons use their hearing to detect predators. It wouldn’t be any use for birds of prey, but they may hear large mammals and reptiles approaching.

Human speech has a wide frequency range. Vowel sounds are typically lower-pitched, whereas consonants – such as ‘s’ sounds – are higher.

The normal fundamental frequency range for human speech is between 80-180 Hz for men and 165-255 Hz for women. But consonants are usually higher than 500 Hz.

According to the Journal of the Acoustical Society of America, the fundamental frequency of speech for infants and children can be up to 2500 Hz. This is because their larynx (voice box) is smaller.

So, how does this relate to ball python hearing? It means that ball pythons can probably hear some of the sounds that our voices make. But they’re only likely to detect speech if it’s loud, low-pitched, and close. They can’t hear consonants or higher-pitched voices.

And because ball pythons hear airborne sounds as vibrations, they will only hear our voice as a muffled rumbling. They can’t distinguish between different words.

So, a ball python can’t learn its name, or understand anything you say to it. You can’t train a snake to respond to vocal commands.

Music is different from human speech, as instruments produce different frequencies. It’s likely that ball pythons can hear some elements of music. But they can’t hear the entire song. For example:

If you played music in your ball python’s room, it would detect some of the vibrations. But it wouldn’t sound much like music to your snake. It would just sound like a rumbling noise or a buzz. Your ball python would most likely be confused, or interpret the vibrations as a predator approaching.

Are Ball Pythons Sensitive to Noise?

We know now that ball pythons aren’t deaf, and they can detect some elements of music and speech. But you may be wondering if they can hear other household sounds, and whether they’re sensitive to noise.

A ball python can hear some of what’s going on around the home. For example, it may detect vibrations given off by a dog barking, a television, a drum kit, or a vacuum cleaner.

Ball pythons won’t hear high-pitched sounds, such as babies crying or children screaming. But they may be able to hear you shouting if nearby.

As they use their hearing to detect approaching predators, excessive noise can stress out a ball python. It may think that danger is coming.