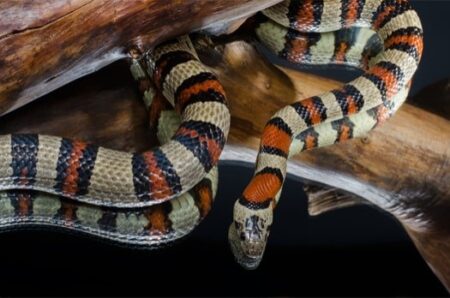 Housing milk snakes (Lampropeltis triangulum) together can help you to save money on resources and make the most of any available space. However, most experienced keepers believe that milk snakes should be housed separately from each other due to the inherent risks involved.

Keeping milk snakes together creates a stressful environment. Disease, illness, and parasites can be passed on between snakes. Belonging to the kingsnake family, milk snakes hunt and eat other snakes, making cannibalism (ophiophagy) a real risk. Putting two male snakes together of different sizes can lead to fighting, and two males will definitely fight for dominance during the breeding season. A male and female snake will reproduce, and this could happen before sexual maturity.

Milk snakes are good pet snakes because they’re very tolerant of their owners, but they aren’t as friendly towards other snakes, even ones from their own species. We’ll look more closely at why it’s always best to keep milk snakes in different enclosures.

Can You Keep Milk Snakes Together?

Although it can be tempting to house two milk snakes together to save resources (tank, substrate, hides, etc.) and space, it’s inadvisable. Milk snakes are carnivores and have been known to eat each other.

Risks of Housing Milk Snakes Together

Cannibalism (ophiophagy) is a significant risk when putting milk snakes in the same enclosure, but it’s most definitely not the only problem. Other dangers include aggressive behavior, stress, early breeding, and the spread of sickness or parasites between snakes.

Mating season can be an extremely combative time for male milk snakes. Males will compete for the opportunity to breed with a female, typically leading to aggression and fighting.

The fight for dominance is a form of natural selection, where only the strongest and healthiest snake specimens will get to breed. It’s more of a wrestling match than a fight to the death, however.

According to SpringerLink, male-on-male fighting in snakes is a sexually dimorphic trait that is expressed during breeding periods.

Milk snakes may accept each other throughout the year, but as the Spring draws near, they may become hostile towards each other. Snakes can become more defensive and territorial during the springtime as they prepare themselves for mating season.

Some keepers assume that their snakes are getting on well when they spot them entwined with each other. However, that’s unlikely to be the case. They’re likely to be battling for the top position in the tank. This is known as a snake breeding ball.

Snakes aren’t social animals. Two milk snakes housed together can easily become stressed and anxious. Not only do they need to contend for space within the enclosure, but they need to compete for food.

If one snake is bigger or more dominant, the other will suffer, becoming unhappy and stressed. The snake may stop eating and lose out on the best hiding spots, affecting its health and wellbeing.

3/ Spread of Illness, Disease, And Parasites

More snakes will lead to the substrate (bedding) becoming soiled with excrement and urates sooner. If your snake lays on a wet or damp substrate for too long, this can result in scale rot.

Putting a snake with snake mites in the same enclosure as another healthy specimen will mean that you have two snakes that are infested with parasites. You’ll end up having to treat two milk snakes, not just the one.

One of the most common illnesses amongst captive snakes is infectious stomatitis. Otherwise known as mouth rot, this bacterial infection can be passed on very quickly to other snakes.

According to the National Association of Biology Teachers, mouth rot is one of the most destructive diseases in captive snakes.

If one snake becomes ill, it’s important to isolate the snake until it’s fully recovered. A period of quarantine of around 3-6 months is recommended. Most herpetoculturists will advise you to adhere to this schedule.

Most healthy snakes reach sexual maturity between 2 and 3 years of age. However, housing opposite-sex snakes together is highly likely to lead to unwanted and premature breeding.

Sometimes it can be difficult to determine the sex of milk snakes, with inexperienced keepers rarely able to differentiate between males and females. This can lead to them being wrongly sexed.

You might think you’re keeping two males or two females together when it’s actually a male and a female. If you’re not sure of the sex of your milk snakes, seek advice from an experienced herpetologist or veterinarian.

Is Co-Habiting Milk Snakes Ever OK?

You might think that placing snakes in a shared environment will save you money. However, this is likely to be a false economy.

Buying one enclosure for every snake you own is more economical than risking the lives of your snakes, especially as some milk snake morphs can be very expensive to buy in the first place.

If one of your snakes become sick or becomes infested with external / internal parasites, you’ll have to treat both snakes, which will be more expensive. Of course, you’ll need an enclosure for each snake during the recovery process, so you’d have to buy two snake tanks anyway.

‘Can milk snakes be housed together?’ is a popular question asked by snake enthusiasts in America. The risks of cannibalism, aggressive behavior, premature/unwanted breeding, and the spread of disease occurring outweigh any benefits to housing a pair of milk snakes together.