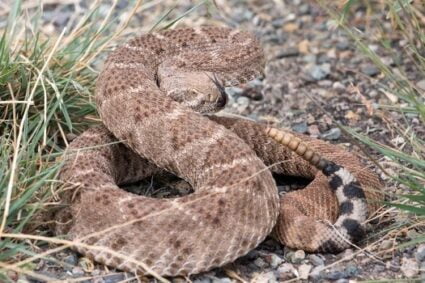 If you live in an area that’s inhabited by rattlesnakes, you may have heard the rumor that they can interbreed with other species. The most common rumor is that rattlesnakes can breed with gopher snakes to create a venomous gopher snake lookalike, but it’s simply not true.

Rattlesnakes can only breed with other rattlesnakes (the family Viperidae). Rattlesnakes are too biologically different for it to be possible for them to breed with non-venomous snakes. There is no such thing as a bull snake rattlesnake hybrid.

What Is a Hybrid Snake?

Two animals of different species can occasionally come together and mate. These pairings sometimes produce living offspring. Such animals are known as hybrids or crossbreeds. Hybrids are often, but not always, sterile (unable to produce offspring of their own).

You’re probably already familiar with certain hybrids within the animal kingdom. But what you may not know is that certain snakes can also interbreed and produce viable hybrid offspring. There are some limitations as to which species can successfully interbreed. The two snakes must:

As you can imagine, this means that snake hybrids are not especially common in the wild. However, they have certainly been documented.

Which Snake Species Can Interbreed?

Most species that can interbreed belong to the same genus. The genus is the taxonomical rank just above species, which contains animals that are quite similar, but not the same (such as horses and donkeys). However, in some cases, two species may belong to different genera and yet still be able to breed, as long as they are part of the same family.

For example, sheep and goats – both members of the Bovidae family – can interbreed, despite belonging to different genera (Ovis and Capra). This is called intergeneric hybridization. So, which species of snake can produce viable hybrid offspring?

There are many rumors concerning hybrids between different species. Few of them, however, have been confirmed or documented. Most confirmed examples come from DNA testing of wild-caught specimens, or deliberate crossbreeding of captive species. The hybrids that we know of include:

All rattlesnakes in the U.S. – except for pygmy rattlesnakes and massasaugas – are members of the same genus (Crotalus). They are genetically and biologically very similar to one another and often inhabit the same areas.

It has been scientifically documented that certain species, such as Mojave rattlesnakes and Southern Pacific rattlesnakes, have interbred in the laboratory and captive environments. Whether they would interbreed in the wild is not known, but it is possible.

However, there has been no documented case of a rattlesnake breeding with any other kind of snake. They are not similar enough to other snakes, even other pit vipers, to breed with them.

Copperheads and cottonmouths belong to the same genus of pit viper (Agkistrodon). They are very similar to one another. For example, both species give birth to live young.

They both have similar colors and markings as juveniles, including a bright green-yellow tail tip. They grow to similar sizes and have similar physical characteristics, such as their heat-sensing pit organs. And, of course, their geographical range does overlap.

There have been several documented instances of copperheads breeding with cottonmouths, to produce what is colloquially known as a “cottonhead” or “coppermouth.” Hybrids usually share some features of both parents, such as the body shape and scale count of a cottonmouth with the color and markings of a copperhead.

Coral snakes belong to the family Elapidae, along with cobras and mambas. They are the only elapid in the U.S., and are very biologically different from the rest of our native species.

For that reason, it’s not possible for coral snakes to interbreed with any other snake in our country. It could, however, be possible for a Texas coral snake to breed with an Eastern coral snake. As the two species are so similar, you likely wouldn’t even notice a hybrid if you saw one.

We need to look at venomous and non-venomous snakes in a bit more detail. What makes a snake venomous or non-venomous?

It comes down to the taxonomical family that the snake belongs to. There are 18 families in the suborder Serpentes, containing all known snakes. The main families, containing the majority of species, are as follows:

Snakes in different families cannot interbreed. It is not possible for a colubrid to breed with a viper, for example. So, in the U.S. at least, there is no way that a venomous snake could breed with a non-venomous snake.

The only venomous colubrids in the U.S. contain such weak venom that they pose no risk to humans, such as garter snakes, and even these have not been noted to interbreed with any snakes from different genera.

Can Rattlesnakes Breed with Bullsnakes?

If you live in a part of the country that has wild bullsnakes (gopher snakes) and rattlesnakes, you may have heard that the two species can interbreed, producing a venomous bullsnake lookalike.

Genetically, bullsnakes and rattlesnakes are about as similar as bears are to raccoons. While the two species have similarities, they are far too different to be able to breed. Even if a bullsnake tried to mate with a rattlesnake, they would not be able to produce viable embryos.

How did this rumor start? Bullsnakes are Batesian mimics: they have evolved to mimic rattlesnakes when threatened, to ward off predators. Usually, bullsnakes have narrow, oval-shaped heads. When confronted, they can flatten out their heads to a triangular shape and vibrate their tails like a rattlesnake. It’s possible that somebody saw this display and concluded that the snake was some sort of hybrid.

If you ever see a bullsnake in the wild, you have no reason to fear it. However, because of their similarity to rattlesnakes, we’d still recommend keeping a safe distance.