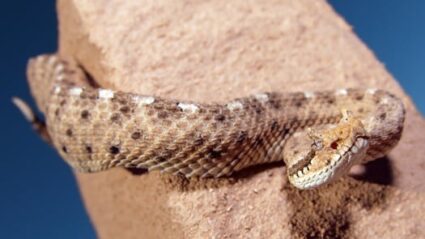 As a venomous predator, rattlesnakes can be an intimidating animal. As you think about ways to keep yourself and your family safe from dangerous snakes, you may end up wondering how easy it is for a snake to get over a wall or a fence. Some snakes climb trees and walls, and you might not know whether rattlesnakes can do so too.

While some species of rattlesnake can climb trees, most are not good at climbing. A rattlesnake may climb a tree to find food, to shed its skin, or to track down a mate. Rattlesnakes cannot climb walls because they do not grip well enough on smooth surfaces. Rattlesnake-proof fencing is too tall for these snakes to climb and too difficult to grip on to.

Here we learn about one of the species of rattlesnake that spends more time climbing than others – the arboreal black-tailed rattlesnake. After we explore why a rattlesnake may decide to climb, we take a look at different surfaces, and whether or not a rattlesnake can climb it.

What Kinds Of Rattlesnake Climb?

Only a few species of rattlesnake are active climbers. Those that do climb stick to climbing trees, shrubs, or rocks.

Rattlesnakes are not good at climbing high up or climbing a smooth surface. Lots of harmless nonvenomous snakes are much better climbers than rattlesnakes. Let’s look at the rattlesnakes that do climb and find out why.

Are There Arboreal Rattlesnakes?

These rattlesnakes find a safe place to sleep in trees, away from predators. Sitting in trees also brings them close to the small birds they like to eat.

Even rattlesnakes that do not live and sleep in trees will climb on occasion. The most common reason why a rattlesnake will climb is to find food. For example, red diamond rattlesnakes will climb up into low bushes or cacti to find prey that lives there, such as small mammals or birds.

According to the Herpetological Review, timber rattlesnakes are often observed in vegetation off of the ground, as high up as 5 meters above the ground. These snakes seek up higher vantage points on broken tree trunks to shed their skin. It is likely that these snakes wish to avoid being disturbed by a predator during this vulnerable period, and so seek out higher ground.

How Do Rattlesnakes Climb?

When you think of how a snake moves, the image of an S-shaped serpentine motion most likely comes to your mind. However, while the serpentine movement works well on the horizontal ground level, it is not useful for vertical climbing.

A climbing rattlesnake will instead use the concertina method of movement. This motion is also known as “accordion” movement. This is because the snake will contract and expand its body as it moves.

If you watch a rattlesnake climb up a tree, you will see it brace the back end of its body against the bark, and then push its head forward. It twists and extends its torso as it moves. Then the snake presses the upper part of its body to the vertical surface, straightens out its body, and pulls its back end up behind it.

As it climbs, the rattlesnake’s belly scales help brace the snake against the vertical surface. This works well on rough bark or edgy rocks. However, it is not so effective on a smoother surface like the wall of a modern house. Snakes may have strong muscles, but even they cannot completely defy gravity.

So far we have talked about rattlesnakes which climb trees. But what about walls? Can a rattlesnake climb up a wall or fence? If you live in an area where rattlesnakes are common, you may be wondering just how much you need to worry about one getting into your house.

The good news is that while rattlesnakes have some ability to climb, they are not very good at climbing. Rattlesnakes cannot climb straight up a wall or on a smooth surface like metal.

When a rattlesnake climbs a tree or a rock, the snake is depending on the rough, distinctively-edged surface of the object they are climbing. Vertical snake movement requires a lot of friction between the belly scales of the snake and the surface they are climbing on.

The wall of a modern house is not the same as the bark of a tree. Walls prove to be a much more difficult terrain for snakes than trees and shrubs. Even if a rattlesnake does manage to get a grip on the blocks of the wall, it will not expend the energy to climb up a high wall. There are much easier ways for the snake to find shelter or food, and it will take them.

How High Can A Rattlesnake Climb?

Arboreal rattlesnakes like the black-tailed rattlesnake can be found in tree branches anywhere between 6 and 10 feet in the air. However, not only are these snakes particularly good climbers, they also are working with tree bark, an uneven surface perfect for their belly scales to grip onto.

If it doesn’t have a good grip, a rattlesnake can really only comfortably climb as far is it can reach with its body. A snake is not comfortable stranding itself in the middle of a wall.

For this reason, a rattlesnake can only climb as high as the snake itself is long. If a 3-foot-long snake comes across a 1-foot-tall wall, it will simply lift its own body up and over without much trouble.

For most rattlesnakes, you will never see them climbing over a wall that’s around 36 inches, or 3 feet tall. The longest rattlesnake in the world is the eastern diamondback rattlesnake, which can grow to be between 5 and 6 feet long.

However, these snakes are not arboreal. Eastern diamondback rattlesnakes are much more comfortable burrowing through the ground than they are with climbing over 3 or 4 feet in the air.

What Surfaces Can A Rattlesnake Climb?

Rattlesnakes need a rough or well-edged surface to grip onto in order to climb it. The smoother the surface, the less able snakes are at climbing.

Solid, smooth surfaces such as metal, aluminum, and fiberglass are slippery slides to a rattlesnake. Wire mesh with small enough holes also feels smooth to the belly scales of a snake. A plastered wall is also too smooth for a rattlesnake to climb.

Stucco walls often prove to be too smooth for a rattlesnake to climb as well. However, this can vary depending on how big the rattlesnake is and how smooth the stucco actually is. If the stucco wall has lots of grooves and ridges, then a smaller, thinner rattlesnake may be able to get a grip on it.

You are more likely to see a rattlesnake attempting to climb a wall made of rough surfaces, such as bricks or concrete blocks. Brick patterns, in particular, include rough ridges for snakes to push their bodies against. However, plaster can turn a rough brick wall into a smoother surface.

This fence is also planted several inches below the ground, which helps keep the fence sturdy and also makes it difficult for rattlesnakes to find a hole in the ground to burrow under the fence through.

The most common material for this fence is a wire mesh supported by thin wooden dowels, spaced out around the fence. Other rattlesnake fences are made from solid, smooth surfaces such as metal.

These fences can get a little pricy, but they can help you if you’re worried about keeping rattlesnakes away from your home. Local hardware stores and garden supply shops have plenty of snake-proof fencing options in stock for you to choose from.

Fortunately, while some rattlesnakes climb trees, they are not very good at climbing walls or tall fences. By taking some simple precautions, you don’t have to keep worrying about rattlesnake safety. This frees you up to observe these amazing reptiles at a safe distance.