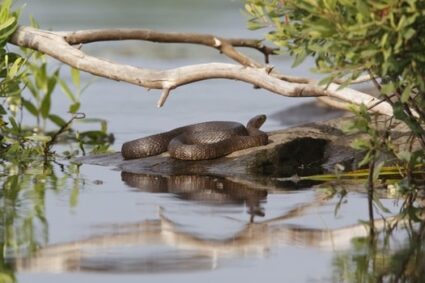 Snakes are proficient swimmers, and are often found in ponds, lakes, and rivers. Aquatic species, such as sea snakes, spend most of their lives in water. Some people believe that snakes drown if they bite underwater, but this isn’t true.

Snakes can bite underwater, when feeding or in self-defense. They don’t drown, because they can open their mouths without breathing. The most common aquatic snakes are water snakes, water moccasins, and sea snakes. They can hold their breath for lengthy periods, and will bite underwater if they feel threatened.

The only venomous aquatic snake in the U.S. is the water moccasin. These snakes are often confused with harmless water snakes. Venomous sea snakes don’t live in the continental U.S., but can be found in Hawaii.

How Do Snakes Swim?

All snakes can swim. Even terrestrial species, which live on land, may swim from time to time. Snakes go in the water to escape predators, drink, or hunt water-dwelling creatures. Snakes also enjoy bathing, especially when shedding their skin.

Most snakes swim on the surface of the water. They move their body in a wave-like motion that gives them an S-shaped appearance. This pushes the water away, allowing them to propel themselves forwards.

Some snakes, however, can also swim under the surface. Water snakes, in the genus Nerodia, spend most of their lives in water. Sea snakes live underwater permanently, only coming to the surface to breathe.

In the U.S., snakes are common in marshes and swamplands. They can also be spotted in or near lakes, rivers, and backyard ponds. Many snakes hunt frogs, toads and fish, and stay near water for this reason.

If you go swimming in a body of water, you may encounter a snake. It’s likely to ignore you, unless you provoke it. However, if it does feel threatened, it may bite. Both venomous and nonvenomous snakes can bite while underwater.

Snakes can’t breathe underwater, because they don’t have gills. They have lungs, and breathe air. Snakes that live in the water have to come to the surface to breathe.

However, aquatic and semi-aquatic snakes can hold their breath for a long time. Sea snakes, for example, can stay underwater for over an hour without surfacing.

According to Royal Society Open Science, sea snakes have specially adapted blood vessels in their heads. They can absorb a small amount of oxygen through their skin from the surrounding water. This allows them to hold their breath for longer.

Sea snakes also have valve-like nostrils that can open and close. Their nostrils remain closed in the water, and open when they resurface, preventing them from inhaling water.

Water snakes and water moccasins can also hold their breath underwater, though not for quite as long. This is because they spend most of their time in the shallows and at the water’s edge.

How Do Snakes Bite Underwater?

A common misconception is that snakes will drown if they try to bite underwater. This isn’t true, as snakes don’t immediately inhale when they open their mouths.

The small opening at the top of a snake’s trachea (windpipe) is called the glottis. Unlike in mammals, the glottis is always closed, until the snake decides to breathe in or out.

While a snake is underwater, its glottis won’t open. This means that the snake can open its mouth underwater, bite, and even swallow, without risk of inhaling water. This adaptation proves necessary when hunting.

Aquatic snakes, such as water snakes, eat fish. They can hunt and swallow their prey while in the water. If snakes drowned when they opened their mouths, this wouldn’t be possible.

This means that snakes can also bite self-defensively in the water. If a snake feels that its life is in danger while underwater, it may bite its attacker. Snakes may bite humans if they get too close, step on them, or try to touch them.

Both venomous and non-venomous snakes can bite underwater. The only venomous water snake in the continental U.S. is the water moccasin, also known as the cottonmouth. But other venomous snakes, such as rattlesnakes, can also swim.

Which Snakes Live in The Water?

Almost all snakes can swim and bite underwater. Snakes may cross bodies of water to hunt, escape predators, or to find a mate.

For example, garter snakes, a typically terrestrial species, are known to hunt fish and amphibians. They are often found in and around ponds and rivers. The same goes for rat snakes, such as corn snakes.

However, certain species of snake are more adapted to water than others. Some snakes are almost entirely aquatic, spending most or all of their lives in the water.

Aquatic snakes found in the U.S. include sea snakes, water snakes, and water moccasins (cottonmouths). They can all hold their breath for long periods of time, and can bite underwater.

Sea snakes (Hydrophiinae) are venomous aquatic snakes that live in the Indian and Pacific oceans. They are elapids, belonging to the same family as cobras and coral snakes. Sea snakes are almost entirely found in saltwater, though some species can swim up rivers.

Although sea snakes are almost fully aquatic, they prefer shallow water. They don’t have gills, so they need to return to the surface to breathe. For this reason, sea snakes are often encountered close to land. Some species, such as sea kraits, can move on land if necessary.

Sea snakes eat small fish and sea creatures such as octopuses. They have smooth, streamlined bodies and can reach up to 4.9 feet in length. Many species have paddle-shaped tails that aid them in swimming.

Hawaii is the only U.S. state that is home to sea snakes. However, some specimens have been found in California. So far, these have been isolated incidents, caused by storms and the like.

Sea snakes can bite underwater, and their venom is highly toxic. According to Snake Venoms, one drop of sea snake venom is enough to kill three adult men. Symptoms include vomiting, aching and stiffness. Eventually, paralysis occurs as muscle tissue starts to break down.

However, most sea snakes are placid and non-aggressive. They rarely bite humans, unless extremely stressed or provoked. When they do bite, their bites are often dry (containing no venom).

The name ‘water snake’ can describe many different species of aquatic and semi-aquatic snakes. But in North America, it most commonly refers to snakes in the genus Nerodia. They are primarily aquatic, non-venomous colubrids, in the same family as garter snakes.

Water snakes are native to the southern and eastern United States. Some species may also be found further west, and in parts of Canada, Mexico and Cuba. They can live in or near any freshwater source, such as rivers, lakes, ponds, and swampland.

There are 10 different species within the genus, and several subspecies. The most common water snakes include:

North American water snakes hunt small fish and amphibians. But unlike most other members of the Colubridae family, they don’t constrict their prey. Instead, they catch their prey in their teeth, and swallow them alive.

Water snakes aren’t aggressive towards humans. They will usually flee or hide if they see a person coming. However, a water snake may bite underwater if it feels threatened – for example, if it’s stepped on.

Because water snakes aren’t venomous, their bites don’t usually require medical treatment. However, their teeth are sharp, so a bite may hurt and bleed. It could also become infected if not properly sanitized.

Water moccasins are in the viper family, like rattlesnakes and copperheads. They are a semiaquatic, freshwater species, and prefer slow-moving rivers and shallow lakes. However, they won’t die in saltwater, and have been seen in the sea.

You may have heard water moccasins referred to as “cottonmouths”. This nickname comes from the inside of their mouth, which is pure white. Their body scales are usually grey, dark brown or black.

When threatened, a water moccasin will form a coiled shape, with its head in the center. It will tilt its head upwards, and open its mouth wide, to show off the white interior. This is a defense mechanism known as ‘gaping’.

Because they’re semiaquatic, water moccasins spend most of their time in the water. They can hold their breath for a long time, and can bite underwater. Although they aren’t aggressive, they will bite humans if they are stepped on or provoked.

Being vipers, water moccasins have fangs and are venomous. According to research by Virginia Commonwealth University, water moccasin venom can cause swelling and soft tissue damage. Bites require medical treatment, but rarely result in death.

Venomous cottonmouths and harmless water snakes are commonly confused with one another. Water snakes have evolved to mimic cottonmouths, as a self-defense mechanism. They look and behave similarly, and inhabit many of the same areas of the U.S.

If you mistook a cottonmouth for a harmless water snake, you may be in trouble. An underwater bite from a water moccasin isn’t likely to kill you, but you’d require medical treatment. To tell the difference between a water snake and a water moccasin, look for these signs:

Water moccasins and water snakes often have similar body colors and patterns. They are brown to black in color, often with horizontal bands or blotches. Both snakes range between 2-4 feet long, and have keeled (ridged) scales.

How to Prevent an Underwater Snake Bite

Water snakes and sea snakes aren’t big enough to eat humans, so they won’t mistake you for prey. The only reason a snake might bite you underwater is if it thought you were a threat.

A study in Copeia tested whether water moccasins would bite when confronted. The researchers found that the snakes would only bite when they were picked up or stepped on. Only 36% of snakes delivered a bite. The others tried to escape, or used alternative defensive tactics such as threat displays.

If you see any kind of snake in the water, don’t get too close, or make sudden movements. Don’t attempt to pick the snake up, attack it, or frighten it, even if you think it’s nonvenomous.

Instead, back away from the snake slowly and calmly. If the snake is on your property, you can call a pest control expert to have it removed.

If you know that there are water snakes where you live, invest in some snake-proof fishing waders. These will keep your feet and legs protected while you’re in the water.