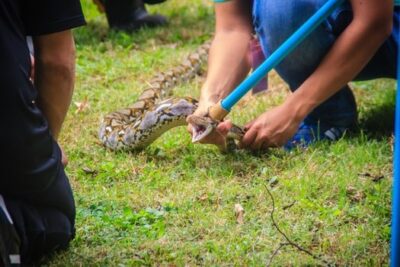 Snakes are excellent climbers. Their ability to climb trees and rocks helps them survive in the wild. But this talent also means that snakes can climb walls, and other man-made structures.

Snakes can climb brick walls and stone walls. They wedge their bodies into the grooves between bricks, and push themselves along using strong core muscles. Lightweight and fast-moving snakes, such as rat snakes, are particularly good at climbing. Snakes struggle to climb smooth walls, such as plastered walls.

Can Snakes Crawl Up Walls?

Most kinds of snakes can climb walls. It’s in their nature to climb, as they are used to scaling rock faces and trees. According to the Texas Journal of Science, timber rattlesnakes can reach arboreal heights of up to 47 feet.

However, man-made walls are more difficult to climb than trees and cliffs. They are entirely vertical, with no branches or other protrusions to latch on to. Whether or not a snake can climb a wall depends on what the wall is made of.

If the wall contains grooves or ridges, a snake can climb it. Snakes are adept at crawling up brick walls and stone walls, for example. They use the gaps between each brick to anchor themselves in place.

Smooth walls, without any crevices, are much harder for snakes to climb. Snakes cannot usually traverse concrete walls, plastered or wallpapered walls, glass, or metal walls.

The only way a snake can climb a smooth surface is if there is something to cling onto. For example, some snakes have been known to climb vinyl siding by gripping the corner trim.

As for stucco walls, it depends on how smooth the stucco is. If the wall is rough, with ridges and grooves, a thinner-bodied snake may be able to grip it. But smooth stucco is impossible for a snake to climb.

A snake can climb any wall that is shorter than its body length. A 4-foot-long snake could climb over a 2-foot wall, regardless of the wall’s material. It would raise its body off from the ground and propel itself over the wall.

The higher the wall, the less likely the snake is to reach the top. It’s purely down to luck, and gravity. The longer the snake has to climb for, the bigger the chance that it will fall. If it put its body in the wrong place, it may lose its grip.

However, snakes are used to climbing tall trees and cliffs in the wild, so they’re persistent. If a snake was especially determined to reach the top, it would persevere until it got there.

Even a 20-foot high brick wall would not keep out a strong-minded snake. It would just take longer for it to climb.

How Do Snakes Climb Walls?

A snake’s body isn’t sticky or tacky. It can’t suction itself to a wall, as certain types of lizards and mollusks can.

Instead, snakes climb walls by wedging themselves into gaps and crevices, so that they don’t fall. They then use their immensely strong core muscles to push themselves along. It almost appears as though they’re defying gravity.

According to the Journal of the Royal Society, snakes use a concertina-like motion to increase their friction to surfaces. Visualize the folds of an accordion: snakes can fold and unfold their bodies in the same way.

Snakes will always follow the pattern in the wall, such as the grouting in between bricks. Even the fastest snakes, like black racers, take time to follow the grooves so that they don’t fall.

That’s why snakes struggle to climb smooth surfaces, such as glass. A flat vertical surface has nothing for the snake to grip.

For the same reason, snakes can’t climb tight mesh fences, or smooth vertical wooden fencing. As long as there are no gaps between the panels, most wooden fences can keep snakes out.

Why Do Snakes Climb Walls?

Snakes are not particularly complex creatures. They are motivated mainly by temperature, hunger, the threat of predators, and the desire to mate. So, there are four main reasons why a snake might climb a wall:

Above anything else, snakes are food-motivated. To make it less likely that a snake will climb your wall, keep your yard and home pest-free. Cut grass short, and remove hiding places such as log and rock piles.

Can Snakes Get Inside Walls?

Snakes can get inside walls, providing there’s a gap of adequate size for it to fit through. And the gap does not have to be very large. Snakes can squeeze themselves into much smaller crevices than you might think possible. Because their bodies are highly flexible, snakes can fit through:

If a snake goes inside a wall, it was attracted to something inside (or on the other side). This is likely to be the scent of a prey animal, such as a mouse. However, it may also try to get inside a wall if there is warmth inside.

In the fall and early winter, most snakes go into brumation (the reptilian equivalent of hibernation). When it’s time, they seek out somewhere warm and safe from predators. A wall cavity may make the perfect spot for this.

Which Snakes Can Climb Walls?

Most kinds of snakes can climb. However, not all snakes would want to, or have a reason to climb a wall.

Snakes can be divided into two main kinds: active hunters and ambush predators. Snakes that actively hunt their prey will follow a prey animal’s scent anywhere. This could lead it up a wall.

Ambush snakes, however, hide somewhere and lie in wait for prey to pass by. These types of snakes are less likely to climb walls.

Snakes that hunt their prey are usually thin-bodied and agile. Therefore, they’re particularly good at climbing walls. These include, among others:

Ambush snakes are normally heavy-bodied and slow-moving. They are less likely to climb walls, because of their weight. They also have less motivation to, as they don’t chase after prey.

However, any snake may try to climb a wall if it’s seeking warmth, or following a potential mate.

Like any other snake, venomous snakes can climb, but some species are better than others. For example, timber rattlesnakes are great at climbing trees. But species found in deserts, such as Mojave rattlesnakes, tend not to.

Because pit vipers are heavy-bodied and slow-moving, they struggle to climb walls. The grooves between the bricks are usually too small for their bodies to fit into. And due to their weight, they are more likely to fall.

However, baby and juvenile pit vipers may climb walls more easily. According to PeerJ, the venom of juvenile rattlesnakes is equally as potent as that of adults.

Coral snakes, being much smaller and lighter than pit vipers, can also climb walls. But they are extremely shy, and unlikely to go near human settlement if they can avoid it.

If you have found a snake and you’re unsure whether it’s venomous, call a pest control expert. Do not approach the snake or try to remove it from the wall yourself. Any snake may bite if it feels threatened.