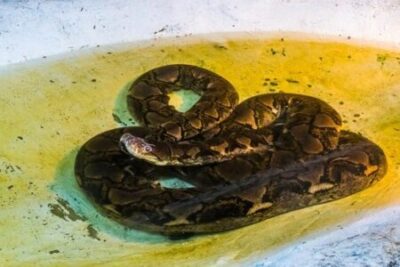 You sometimes notice that your snake is twitching, which makes you wonder if your snake is having a seizure. Snakes can get severe health conditions that cause muscle spasms, neurological problems, and seizures.

Snakes can have several kinds of seizures, but corkscrewing and stargazing are the most common. Seizures cause snakes to lose control of their movement. They may seize up before they die due to neurological problems (inclusion body disease) from breeding/disease.

Sometimes, such as in cases of inclusion body disease (IBD), nothing can be done to treat snake seizures. Other times, basic changes to a snake’s living conditions can result in improvements.

Why Is My Snake Twitching?

There are various causes of ‘seizures’ in snakes (ball pythons, corn snakes, etc), and many kinds of ‘seizures’ that they can experience. None are a good sign, but some are more severe than others.

The two most severe kinds of spasm are corkscrewing and stargazing. These are specific movements where the snake curls its neck in a corkscrew motion (corkscrewing) or gets stuck looking upwards (stargazing). These are the common symptoms of a severe neurological problem.

The crucial difference is the amount of control. If your snake appears in control of its movements, then there likely isn’t an issue. If the snake can’t control its twitch or spasm, then it may be a sign of a serious issue.

Neurological Problems that Cause Seizures

Problems in the brain cause seizures, but these issues don’t always ‘start’ in the brain. They end up ‘affecting’ the brain as the condition progresses.

Some snakes have problems in their genes that cause neurological issues. The spider morph, in particular, is susceptible to ‘head wobble.’ Any other morph that has spider genes, e.g., bumblebees, have this problem. It’s the most common neurological issue that causes involuntary movement.

Can Injury or Trauma Cause Neurological Issues?

Neurological issues due to trauma are more common in wild snakes than captive snakes. Snakes strike at predators to repel them, but could sustain a bad injury in the process. A snake could also fall from a tree or get hit by a car when moving across a busy road.

Sudden trauma can cause snakes to behave unexpectedly, which may appear spasmic. It can also physically damage the brain, which would likely cause the snake to lose coordination and control.

IBD isn’t a neurological condition, at least not to begin with. According to the Veterinary Journal, IBD a viral infection that affects boids and pythons. It has no cure, so the snake will die.

Snakes with IBD will also roll onto their back, as if they don’t know up from down. They can’t control themselves, or right themselves when in this position. They may also show signs of corkscrewing.

Only boas and pythons can get IBD. If you want to identify whether your snake has it, though, spasms aren’t the only symptom. Other symptoms of inclusion body disease include:

Can Diet Cause Seizures?

Garter snakes are especially susceptible to seizures if their diet is wrong. The enzyme thiaminase can cause them to have seizures. Thiaminase is common in some fish species, fish being the main diet of garter snakes.

The problem is that thiaminase breaks down thiamin (vitamin B1). If everything you eat has thiaminase in it, then you can’t absorb any B1, as it’s broken down. Thiaminase, therefore, leads to a vitamin deficiency.

If your garter snake’s diet is solely fish, it may face this issue. The vet can resolve this problem with a vitamin B1 injection. But, to avoid the issue recurring, you have to change its diet to include foods with no thiamin.

Other snakes may also be susceptible to seizures too if their diet isn’t optimal. But the scientific reasons why aren’t well understood

Does Overheating Cause Neurological Problems?

If the snake is kept in conditions that are too humid or hot, it can cause burns, bacterial growth, and completely alter the snake’s metabolism.

In isolated cases, it has also been known to cause neurological issues. This primarily occurs after extreme temperature stress over a long period of time. This leaves the snake with burns and neurological damage.

What Is Head Wobble Or Head Shaking?

Head wobble is a neurological problem that’s most common with the spider ball python, and its genes. It involves the snake’s head moving backward and forwards shakily. There is no way to prevent the wobbling head.

In severe cases, the snake will find it hard to move around. When it tries to strike at food, it will miss its target. This is just part of a general loss of coordination that co-occurs with the wobble.

These neurological issues can be severe enough that newly-hatched snakes don’t survive. Typically, the head wobble isn’t severe enough to cause death. The snake will eat, move around, and mate as well as other snakes.

Head shaking is a neurological condition. There is a problem with the brain and nervous system that means the snake lacks coordination. The most common explanation is the ‘spider’ gene.

This gene gives the spider its unique color and pattern combination. But it has the side effect of causing the wobble. Other morphs, like bumblebee ball pythons (which are bred from spiders) also have the wobble.

Corkscrewing is where the snake loses control of its body. It’ll move its neck in a corkscrew shape, round and round, instead of forward.

In severe cases, the snake can hardly move at all. It’s as if the snake can’t tell up from down. It seems to lose all sense of direction and perspective. This can occur in isolated episodes brought on by stress, e.g. feeding. It can also be a constant problem.

Corkscrewing is associated with neurological disorders, but they can acquire these disorders in several ways. The most common cause of corkscrewing is IBD, which was discussed earlier.

Corkscrewing has also been seen after overheating. A malfunction in a snake’s heat source can make the snake far too hot.

Spasms are involuntary muscle contractions. A spasm doesn’t necessarily involve quick movements. One example of this kind of spasm is stargazing. This is where the snake gets stuck looking upwards, often for extended periods of time, and it can’t seem to stop.

This is technically a spasm because its muscles are involuntarily contracted. But it doesn’t look like what you imagine a ‘spasm’ to look like. The snake moves slowly into its upright position.

Stargazing is caused by Inclusion Body Disease. As explained, IBD is a viral condition that affects the brain. In the way that degenerative diseases damage the brains of humans, they do exactly the same in snakes.

In particular, IBD damages the snake’s ability to perceive direction and distance. Stargazing is related to this deficit.

What To Do For Snakes Having Seizures

Your vet will suggest specific things that prevent viruses from spreading, or your snake’s condition getting worse (where possible). Do the following

Depending on the cause of your snake’s seizures, assuming that it’s not due to Inclusion Body Disease (IBD), there may be no long-term problem. Your snake can live its life as any other snake would.