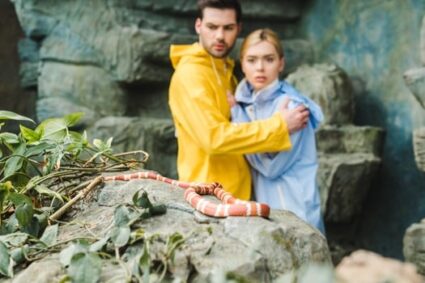 Taking a pet snake outside ‘seems’ like the right thing to do for a captive animal that doesn’t get to spend any time outdoors. Many owners take snakes for a ‘walk’ around with them. Obviously, you have to make sure that you comply with the law and take safety precautions.

It’s usually legal to take a pet snake out in public, but you can’t take them to heavily populated local parks and shopping malls. Always check state-specific laws. If you do take your snake outside, keep hold of it at ALL times. The downside is that snakes will scare people. Never take venomous or large constrictor snakes outdoors.

There aren’t many really good reasons for taking a snake outdoors with you. Every year more state and federal laws are created to limit your rights as snake owners. That’s why you have to do everything you can to present yourself and your pets in the most favorable light possible.

Can You Take a Snake for a Walk?

You can take a snake for a walk, but that doesn’t mean you’ll get them on a little leash and have them slithering alongside you. If you let them go where they want, it’s inevitable that they’ll get away from you.

So, while you take them for a walk, you’ll have to either hold onto them or have them around your neck. That way, you can stay in complete control of your pet snake at all times.

You can’t take a snake for a walk in places like the mall or park. Ideally, you should choose places that are quiet—places where there aren’t many other people or animals. That’s because the reaction of people (and dogs) to your snake will be negative or aggressive.

Can You Bring a Snake to School?

The same rules apply to snakes as they do any pet: don’t just take them into school with you. The only exception is a ‘show and tell.’

If you want to bring your snake to school for ‘show and tell’, ask your teacher whether it’s allowed. Explain to them that your snake isn’t venomous, poisonous, dangerous, or very large.

If you’re allowed, then bring it in a carry case or container of some kind that they can’t get out of with air holes. A Tupperware container would be OK because it’s strong enough to prevent the snake from coming to any harm, and the lid is on too tight for it to escape.

Besides that, make sure that the teacher has somewhere for you to keep it if you can’t keep your snake with you all day. And needless to say, don’t get them out and play with them during recess.

Can You Take a Pet Snake on a Plane?

You can take a pet snake on a plane, but only in the hold. You can’t take them with you to your seat. Airlines have regulations on snakes, so be sure to check the rules with your airline before you book tickets.

When you do fly, you’ll be asked to check your snake in before you get on board, so make sure that it’s in a container that meets airline regulations.

Until recently, snakes were allowed in the cabin of many airlines as emotional support animals. But according to Forbes, American Airlines, United and Delta have all banned snakes as support animals.

Reasons to Take Your Snake Outside

There aren’t many reasons why you should take a snake outside. However, let’s take a look at the reasons why most people do so:

That in itself is a noble enough idea because snakes are misunderstood by the public. Helping people learn more about them is a great idea. The only problem is that confronting people about their fears when they’re not expecting it isn’t recommended. Many people are terrified of pet snakes.

Show Off Your Snake To Friends

There’s nothing wrong with that—snakes are amazing animals. But again, taking them outside isn’t the right approach. Your snake isn’t a toy, and no doubt your friends will want to handle it. If they don’t know a lot about snakes, this can lead to aggression. A friend could get bitten by the snake.

Most pets don’t fare well if you leave them alone. Some dogs and cats will tear up your furniture if nobody’s home for a few hours. But snakes are asocial, so they’re more than happy to be left alone.

All of this might sound overly negative. But that’s because there aren’t any good reasons to take a snake outside.

Why Shouldn’t You Take a Pet Snake Outside?

There are 4 reasons why you shouldn’t take your pet snake outside:

Negative Reaction from The Public

While you understand that your ball python or corn snake isn’t anything to be afraid of, most other people don’t. You can’t gauge the kinds of reactions that you’ll get.

Say, for example, that a person in the park sees you with a snake, and they have a phobia of snakes. Well, while you might think it could be a learning experience, but they won’t. They could be frightened.

Maybe your snake won’t appreciate being around such loud noises and unpredictable threats in an open space. This could cause stress for your snake and have an impact on its health and wellness.

Captive snakes normally have far fewer instances of infestations like mites and ticks. Proper husbandry guidelines requires that all snakes are kept separately in individual enclosures. Also, you need to wash your hands before and after handling them. Snakes carry salmonella.

By taking them outside in the wild and not being able to cleanse your hands, you expose them to unnecessary risks.

Your snake could easily get away from you. Let’s say you take them to the park. You’re having a great time, and go to sit down on a bench. You get distracted by something for just a few seconds and, all of a sudden, your snake manages to escape.

Snakes are quick movers through grass, and you can’t see them anywhere. So, just for the sake of showing them off, you lose your pet snake.

No Benefit for The Snake

There’s no real benefit to taking a snake outside. You have to walk your dog so that they can go to the toilet or use up some of their energy. But a snake doesn’t need the exercise or fresh air.

There’s no problem whatsoever with keeping the snake inside for its entire life. In fact, snakes prefer small and enclosed spaces rather than big open areas like the local park. They just need to be fed and cared for properly.

Where Can I Take My Pet Snake?

The most obvious place is a reptile show. There’s no problem walking around with a snake at a show because everybody is comfortable around and expects to see snakes.

If nothing is going to stop you from taking your snake outside, then the best place to do that is going to be in your yard. It isn’t in public, but it is outside. You’re away from anybody that you might frighten, and if they do escape, then it’s unlikely that they’ll go far, although they’ll still be hard to find.

Going to the park with a snake is a bad idea as you’ll encounter people who don’t want to see snakes. Never take venomous snakes outdoors with you.