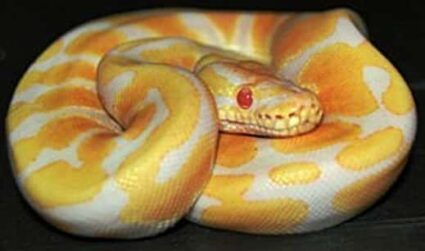 Candino ball pythons are the result of breeding an ‘albino’ with a ‘candy.’ Their highly contrasting colors are bright yellow and light pink. Their pattern is of a solid yellow color separated by small pink pools and stripes.

There are literally hundreds of morphs, but only 2 distinct categories. There are base morphs, which were caught in the wild and imported in order to be bred. Then there are designer morphs, where one morph was bred with another morph to create something completely new.

How to Breed Candino Ball Pythons

That means that every offspring from the pairing will be a combination of candy and albino. This is much simpler than breeding other morphs.

It is also possible to breed a het candy with an albino, or a het albino with a candy. Het, or heterozygous, means that the snake carries the gene but doesn’t show it. A regular ball python can carry candy genes but not display them, because the candy genes are recessive.

It’s when you want to breed candinos then things get complicated. You can’t just put two candinos together and expect them to produce more candinos. It doesn’t work like that when you work with recessive genes.

The best you can hope to get is a 50% rate. That means that only half of the offspring will be candinos. Here’s a breakdown of how the breeding process works and the average rates you’ll get:

The candy ball python is a base morph. This means that it was originally found in the wild and shipped over to the U.S. The Candino ball python is bred from a candy and an albino pair.

In terms of appearance, the candy ball python and Candino are similar to one another. The candy has the same bright pattern of yellow with a kind of purple. Their pattern is also the same.

However, there are several notable differences. If you learn these, you can always tell a candy and a Candino apart:

Breeders create designer morphs because they are the most interesting ball pythons, as well as fetching the highest price tags:

The pastel gene is a co-dominant one that increases the yellow pigmentation of a ball python. They also tend to have lots of blushing and characteristic white lips. When bred with other morphs they ‘clean up’ the other morph’s color and pattern.

This is what you see with the Candino pastel. Their color isn’t dramatically different from a regular Candino. Unlike pastels, Candino pastels don’t have much noticeable blushing. What you will see is that a prominent white line often surrounds their pattern.

The main difference is that their pink coloration is lighter. This is good and bad. On the one hand, a Candino’s pink color is beautiful to look at. But the Candino pastel’s lighter pink means that their yellow-orange stands out even more.

Black pastel ball pythons are similar to cinnamons, but are a separate line. They’ve been bred since 2002, and are a basic morph. Despite that, they have never reached the levels of popularity that other morphs have.

They are high-contrast, with a deep chocolate-black background. Their pattern is a mix of deep red-brown and gold. When bred with a Candino, they create a snake that looks like a Candino pastel but duller.

Their background pattern is a light purple-gray, while the rest of their color is a deep orange or yellow.

Enchis are a base ball python morph. Their brown color is transformed into a much lighter orange or even deep yellow. Also, their pattern is thinned out. They’re a popular base morph used to create designer morphs.

Enchi candinos have a more interesting color and pattern variation than others. Their pattern is changed to that of the Enchi, for a start. But their color makes them stand out among Candino morphs.

They also have extensive blushing in their darker pattern. They are clear banana yellow on top, but as you move down their sides, that yellow turns to orange.

The Candino clown ball python is a mixture of the Candino and clown morphs. The clown morph is much the same as a regular ball python, except their pattern is different.

They don’t have pools of color and stripes running down their sides. Instead, they have a wobbly line running along their back. This line is the same color, and has blushing if the morph has blushing too.

That means that the Candino clown is the same color as a regular Candino. Its sides are almost a pure yellow, as bright as the yellow of a normal Candino.

Cinnamon ball pythons are similar to a normal. Their dark color, black on a normal, is browner.

Their pattern is also slightly different, in particular, the pattern on the head. Instead of having two distinct dots, there is usually just one, often in the shape of a heart.

Candino cinnamon ball pythons have the cinnamon pattern. Their color is bright, essentially the same as a regular Candino.

The Candino banana (or banana Candino) is a rare designer morph. It hasn’t yet been widely bred, and may be exclusive to the breeder, Geneseeker Genetics. It’s a mix of Candino and banana, which means that both its color and pattern are changed.

Banana ball pythons look like candinos. They have bright oranges, yellows, and pinks. Their pattern contains lots of blushing, too. Their heads are often darker than the rest of their bodies. They also have tiny black spots.

A Candino banana’s pink color is a little paler than a regular Candino. Their bright yellow sections have been overtaken with lots of orange blush. Overall there’s little change because they already have similar colors.

But it’s the unique spotting of the banana gene that makes them stand out. Banana ball pythons develop small black spots irregularly along their body. These spots sit on their pink pattern rather than their yellow pattern.

Leopard ball pythons have darker colors than normals. They are a basic morph that has been around for years. Their pattern may also be different—more irregular with the potential for striping on their neck and tail.

A Candino leopard will be the color of a regular Candino, no different. They will have the leopard’s pattern. Because of the bright color contrast, this change in pattern is noticeable and beautiful.

The Candino pied ball python is a mix of Candino and pied genes. The pied gene affects both color and pattern.

In regular pied pythons, the effect is one where most of the body is white. In this case, ‘white’ is a real pure white rather than light pink or cream. Interspersed along the body are pools of color. The head is always covered with color rather than white.