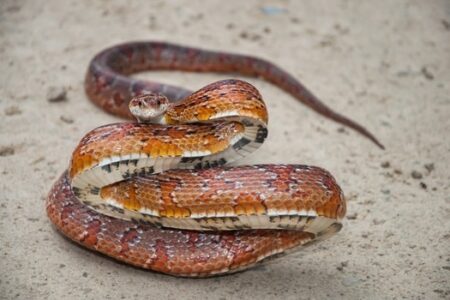 Corn snakes are popular pet snakes due to their beautiful patterns, calm temperament, and ease of care. They’re often found in corn fields where rats and other small mammals come to feed. Although corns are usually very docile and gentle, they can bite their owners.

A corn snake’s bite hurts about as much as a papercut. The worst bites may feel like sharp pricks that lead to mild bleeding or spotting. Bites from young corn snakes don’t even penetrate the skin. In most cases, owners feel the pain from the bite because it is so unexpected, not because it has caused any significant harm.

Corns rarely bite their owners, unless they’re hungry or scared. Corn snake bites can occur when the owner has his or her hands inside the tank after handling food (hands smell like prey) or if the snake is feeling stressed before/during handling. There are other reasons, too, which we’ll now explore in greater depth.

Corn snakes are non-venomous, constrictor snakes. They lack venom glands, so their bites are not toxic (harmless) to humans. The amount of discomfort caused by a bite from a corn snake depends on the size of the snake (adult vs. juvenile) and the area of the body that’s bitten.

Corns have very small teeth that resemble tiny fish bones. Their teeth are sharp and recurved to help them latch on to their prey. Corns have a total of 20 to 30 teeth, but no fangs as they don’t inject venom.

Their bite is no more painful than a minor scratch. If a hatchling bites you, its tiny teeth likely won’t be able to penetrate through your tough skin.

Corn snakes swallow their prey whole. So, their angled teeth are solely used to hold on to their prey while they constrict it. If you’re bitten, there may be a few tiny spots of blood where the teeth pierced the skin. A quick rinse with soap and water is typically all that is needed following a snake bite.

Don’t try to pull your corn snake away when latched on to your skin. Its teeth point backward, so pulling the snake from the tail end will only cause its teeth to tear your skin down further and cause additional pain.

Why Do Corn Snakes Bite Humans?

Corn snakes are easy to care for because they have such a calm demeanor. They tolerate being handled well, even for prolonged periods of time. However, some corns bite their owners unexpectedly.

If your hands smell like prey because you’ve been holding its meal, your corn may lash out to grab its prey while you try to feed it. This can cause the snake to mistakenly identify your hand as its prey.

Snakes use their sense of smell more than their vision because their sight is comparatively poor. So, wash your hands prior to feeding, and always use a pair of tongs to feed your pet snake.

According to the General and Comparative Endocrinology, snakes that had higher levels of corticosterone (stress hormone) showed more defensive behavior, such as biting.

Although corns tolerate being handled, each snake will have a different personality based on its genetic makeup and how it’s been treated in the past. Overhandling is a common cause of stress-related biting. It’s advisable to leave your corn alone when it shows clear signs of agitation.

Corn snake bites aren’t venomous, so they’re not harmful in that regard. Of course, the mouth of a corn snake does harbor germs and bacteria.

Snakes (in fact, all reptiles) carry Salmonella on their skin and other harmful bacteria. It’s important that you sterilize the area of broken skin thoroughly if you go get bitten by a pet corn snake.

What To Do if a Corn Snake Bites You

If a corn snake latches onto your skin, pulling it backward will most likely make the puncture wounds bigger. Instead of pulling the snake away as an instinctive reaction, you need to lift its head upwards to loosen its grip.

In most cases, corn snake bites don’t need anything more than a warm water rinse with soap followed by an antiseptic ointment. The area of damaged skin will quickly heal and the experience will soon be forgotten.

Be aware of your corn snake’s mood, it’s shedding habits, and hunger level before you place your hand into its tank. Even contented snakes can get startled and strike. However, even if bitten, it’s not going to hurt much.