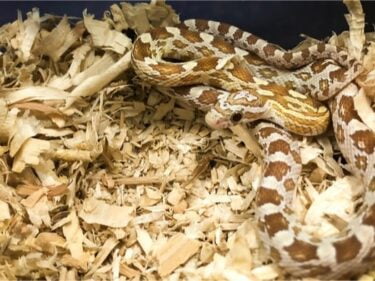 We all want the best substrate for our corn snakes. But, since there are so many good options (Aspen, Cypress Mulch, Lignocel, Reptichip, etc.), which one should you buy? Is it necessary to use a substrate, or should you use something that’s virtually free, such as paper towels or newspaper?

The best substrate for pet corn snakes is Aspen. It allows your corns to burrow while also holding on to enough moisture. This helps keep the humidity level between 40% and 50%, which is optimal for colubrids. Cyprus Mulch, Reptichip, Lignocel, and hemp are good alternative beddings for corn snakes.

Never use sand as a substrate as it can get under a snake’s scales, and can also cause impaction. Pine shavings contain phenols, which are toxic to snakes. According to the Indian Journal of Critical Care Medicine, phenols are used to repel snakes. We’ve looked at all of the best bedding choices for corn snakes, and detailed what makes each substrate so good.

Without a substrate to line your snake’s enclosure, any moisture from your spray bottle, the water bowl, and urates won’t be properly absorbed.

This means that the enclosure will be damp, and bacteria will multiply. This is the cause of scale rot, which is a bacterial infection of the scales. You need bedding that’s absorbent, looks good, and is easy to burrow in.

Aspen bedding is the most popular kind of corn snake bedding. It’s made from shaved Aspen wood, which is an ideal substrate and isn’t too expensive. It’s just a few dollars each time you completely replace it.

If you use Aspen, it’s vital that you use enough for your corn snake to burrow in. 2-3 inches at the bottom of your snake’s cage is a good guideline, but you may wish to use more as your corn snake grows in size.

Cypress mulch is similar to Aspen in that it’s made of wood that’s shaved into tiny pieces (mulched).

Lignocel is made from spruce and fir. It’s highly chipped and dried at high temperatures, so it’s dry and highly absorbent.

Reptichip is a popular brand that makes its substrate from 100% coconut husks. You have to fill up a plastic container and submerge it. You’ll notice bubbles escaping, and slowly but surely, it’ll keep expanding.

Hemp is made from the stem of the plant rather than the leaves. It makes soft, fibrous bedding that’s not unlike aspen.

There are two different kinds of bedding made from hemp. The first is shredded, soft, and fibrous. There’s also one that looks like pellets, which inflates when you submerge it in water.

Newspaper is a simple and effective choice. We’re talking about newspapers that you’ve read and have piled up somewhere.

Paper towels are another substrate option for the budget-conscious snake owner. Lay them along the bottom of the tank torn, shredded, or scrunched up. This versatility makes paper towels a convenient bedding choice.

How deep should a corn snake’s bedding be? Between two and three inches is a good guideline. This gives a corn snake enough room to burrow without sitting against the very bottom of its tank. This should be more than sufficient to absorb any urates, and it will create sufficient humidity.

How Often Should You Change Corn Snake Bedding?

Caring for your corn snake doesn’t just mean replacing its substrate once per week. Instead, you should care for your corn snake by ‘spot cleaning’ its cage. Corns go to the toilet a few days after they’ve been fed, but otherwise, they won’t get their bedding very dirty at all.

So, the idea of spot cleaning is to keep an eye on your corn snake and see when it goes to the toilet. When it does, clean it up immediately, as well as the bedding that was soiled. Replace the small amount of affected bedding.

You’ll need to replace your corn’s bedding completely once every 1-2 months. At this point, the general build-up of dirt, bacteria, etc. will start to take its toll.

Take all of the bedding out and clean the enclosure fully with an antibacterial spray. Allow your snake’s living space to dry before replacing the bedding, and finally, reintroduce the snake to its home.

Which Bedding for Corn Snakes Should I Buy?

Corn snakes burrow in the wild, so they should be given the freedom to do so in captivity. Aspen is the best choice for snake bedding. It holds its shape when burrowed into, but is still soft enough not to hurt your snake. It’s absorbent, and looks better than many of the other choices.

Whatever substrate you use, we recommend 2-3 inches of depth. This is a good balance, allowing the corn snake to burrow. Underneath, have some paper towels to absorb any extra moisture that might get through.