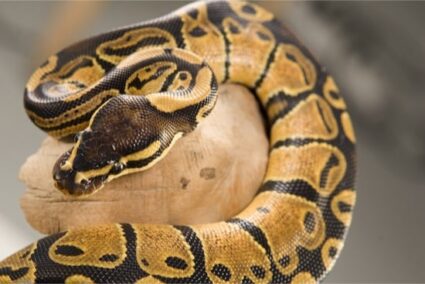 The thought of getting your first pet snake is an exciting prospect. However, it can be hard to decide whether to get a corn snake or ball python.

Corn snakes and ball pythons are non-venomous, easy to care for, and tolerate handling well. Each snake thrives on a rodent-based diet. They are constrictor snakes with relaxed temperaments, so they will rarely bite their owners once a basic level of trust has been established. Corn snakes grow longer, but ball pythons are heavier-bodied. Ball python can live for longer than corn snakes on average.

A corn snake or ball python would each be a good first snake. However, they have different characteristics. We will look at the pros and cons of corn snakes and ball pythons so that you can make an informed decision.

Corn snakes (Pantherophis guttatus) belong to a genus of rat snakes in the Colubridae family. Colubrids are the most common family of snakes, containing about two-thirds of all the world’s serpents.

They are non-venomous, and kill their prey via constriction. Harmless to humans, corn snakes are comfortable around humans and rarely bite.

If you live in North America, you will likely have come across a corn snake out in the wild. The woodlands, farmlands, and fields of the southeast United States are where corn snakes call home.

Captive corn snakes can be found in the homes of reptile hobbyists all around the world. They make good pet snakes for the following reasons:

Corn snakes are slim-bodied snakes. Even at their longest (6 feet), they remain lightweight and easy to handle. Their heads are quite narrow and they are smooth-scaled.

The natural color of a corn snake is orange. They have darker reddish-orange patches or “saddles” down the length of their body and orange eyes. A corn’s belly has beautiful black and white checkerboard markings.

Breeders of corn snakes have also created hundreds of different morphs. Some of the most popular morphs include albino, blood red, caramel, snow and axanthic (black and white).

We’ve put together a complete care guide for corn snakes for you to read.

Ball pythons (Python regius) are another good beginner snake. They belong to the family Pythonidae, a group of heavy-bodied but non-venomous snakes native to Africa, Asia, and Australia.

Ball pythons constrict their prey and are harmless to humans. They stay quite short in length, although the females grow larger than the males.

Ball pythons are one snake that you probably won’t come across in the wild. They are endemic to sub-Saharan Africa, from Senegal in the west to Uganda in the east. But most pet ball pythons are bred in captivity.

In the wild, ball pythons live in savannahs and grasslands. They can climb trees, although they spend most of their time on the ground. They love hot temperatures and quite a bit of humidity. Ball pythons make great pet snakes for many reasons:

Ball pythons look regal, as evidenced by their nickname “royal pythons.” They are dark brown with golden-tan markings along their backs. Their eyes are so dark that they look almost black. Their heads are small compared to their thick, muscular bodies.

It’s widely agreed that ball pythons are one of the “cutest” snakes. They have wide cheeks, big eyes, and a soft, rounded snout. They tend to curl up in an adorable ball when startled.

Ball pythons also have a row of pits along their lips, which look like small indentations. According to Nature, these pits contain infrared receptors, allowing them to detect the body heat of their prey. This is a trait shared by most pythons and “pit vipers”, such as copperhead snakes.

There are thousands of ball python morphs. Some of the most popular include the banana, butter, albino, ghost, and spider. There are even piebald ball pythons, with large patches of unpigmented white scales amongst their markings.

Here’s our extensive guide to caring for ball pythons as pets.

Now that you’re familiar with corn snakes and ball pythons, let’s compare and contrast them. They are quite different species, and while they do have their similarities, there are also many differences.

One of the best things about owning a snake is having the opportunity to handle them. No snake truly enjoys being handled, as they are asocial animals. Handling is mainly for our enjoyment as reptile keepers. However, ball pythons and corn snakes tolerate being handled well.

Most specimens that have been bred in captivity are used to human contact, and are quite confident around people. Ball pythons are more docile than corn snakes, so cope with handling slightly better.

Ball pythons tend to sit in your hands, without moving around too much. Corn snakes can move quite fast if they choose to do so. That being said, corn snakes are much lighter in weight than ball pythons.

Their temperament is about even, though. Neither snake will act defensively or bite unless they are provoked or stressed.

You can’t own a pet snake without facing the inevitability of being bitten once in a while. Even the most placid snakes will occasionally bite their owners, either because they have mistaken you for food or think that you’re a threat. Eventually, your snake won’t associate your scent with danger.

Both ball pythons and corn snakes are non-venomous. They have small teeth that won’t do much damage. At the most, you’ll end up with a few small puncture wounds that might bleed. Being bitten by a corn snake or ball python is no more dangerous than being bitten by a small cat.

Neither snake grows large enough to constrict a human, so you don’t have to worry about being attacked. You should be aware that all snakes carry salmonella bacteria on their skin. So, it’s important to wash your hands thoroughly before and after handling a snake or cleaning its enclosure.

Ball pythons stay quite short throughout their entire lives. The males typically reach 3 – 3.5 feet, and the females are larger at 4 – 4.5 feet. However, because they are heavy-bodied snakes, they can become quite thick and heavy. They can weigh up to 5lbs at their largest.

Corn snakes can grow much longer. Both males and females can reach up to 6 feet in length if they are healthy and well cared for. Though that length might sound a little intimidating, corn snakes are light-bodied snakes. Even the longest corn snake will not weigh more than about 2lbs. If you’d prefer a smaller snake to start with, a male ball python is preferred.

In the wild, ball pythons eat mice and rat species that are native to Africa, such as the African soft-furred rat. Corn snakes feast on common mice and rats, as well as some smaller reptiles and amphibians.

Captive snake owners should always feed their pets frozen-thawed rodents. For corn snakes, mice are the food of choice. Ball pythons will thrive on rats as they are larger and better suited to a ball python’s body size. Each type of snake should be fed roughly once every 1-2 weeks as adults.

Feeder rats are more expensive than mice. Not only this, but ball pythons can be fussy eaters. It can often be difficult to get them to eat frozen-thawed food. Corn snakes are easier to feed than ball pythons.

There are 3 main costs associated with keeping snakes:

No matter whether you choose a ball python or a corn snake, a “normal” snake will be significantly cheaper than an exotic morph. You can purchase a normal corn snake or ball python for $30-$40.

A morph will set you back a lot more. Corn snake morphs can cost over $1,000, whereas the rarer ball pythons can reach well over $15,000.

Corn snakes and ball pythons require a vivarium. Here are our recommendations for a corn snake tank and a ball python enclosure.

Regarding size, you should make sure the vivarium is at least as long as your snake’s body. This means that your corn snake may need a larger enclosure than a ball python because they grow larger. You’ll also have to buy two snake hides, water bowl, and a heated pad.

For corn snakes, the best heat source is a heat lamp or overhead ceramic heat emitter. This is because wild corn snakes like to bask in the sun. Ball pythons do best with belly heat from a heat mat. Regardless, you’ll need a thermostat to control it and a hygrometer to monitor the level of humidity.

Regardless of the type of snake that you choose, you’re going to need to care for them properly. This involves:

The only real difference is that ball pythons require a higher temperature and humidity in their vivarium than corn snakes.

For ball pythons, the vivarium’s humidity level should be 60%. This can be achieved by keeping a large water dish in the vivarium and misting the air should the humidity fall too low. The temperature should range from 78 degrees Fahrenheit at the cool end to 96 at the warm end.

For corn snakes, aim for a humidity level between 40-50%. This is around the same humidity as the average American home, so it’s easily attainable. The warm end of the vivarium should reach 85 degrees, and the cool end should be around 70.

Though both snakes require similar levels of care, it’s somewhat easier to maintain a corn snake’s environment than a ball python’s. Both snakes will need extra humidity when they shed.

Like all animals, snakes can get sick occasionally. Health problems in snakes often arise from improper husbandry, but not always. Common health problems in ball pythons and corn snakes include:

Ball pythons (all boas) are at risk of getting a fatal condition called Inclusion Body Disease (IBD). However, corn snakes are more susceptible to problems such as scale rot, which can occur from excessive humidity.

Snakes live for a long time in captive conditions. As pets, snakes are not exposed to predation. They’re well-fed so they’re unlikely to starve, and we rush them to a vet if they become ill.

In the wild, a corn snake’s life expectancy is around 6 to 8 years. However, pet corn snakes frequently reach the age of 15 to 20.

Wild ball pythons may live around 10 years. However, the lifespan of pet ball pythons usually ranges from 20-30 years. According to the Chicago Herpetological Society, the oldest ball python lived to be 48 years old.

Whether you opt for a corn snake or ball python depends on your preferences. If you want a smaller snake, a male ball python is recommended. They don’t grow as long and are slow-moving.