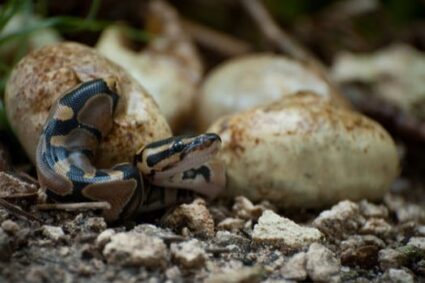 Most snakes abandon their eggs before they hatch. Even species that bear live young will leave their babies immediately after birth. But some snake species guard their young for a while, to help them get a head start.

Snakes are precocial, meaning they can survive independently straight away. Most snakes never meet their mothers, or desert them immediately after hatching or being born. However, some snakes take care of their young, such as vipers and African rock pythons. These snakes stay with their mothers for 2 weeks, or until their first shed.

Some snakes, such as pythons, have a strong maternal drive. It’s hard to separate a python from its eggs without her striking at you. This evolutionary instinct significantly increases the chance that their young will survive to adulthood.

How Do Snakes Care for Their Young?

Snakes reach sexual maturity between 2 and 8 years of age. Snakes can reproduce in various ways, depending on species.

Around 70% of snake species are oviparous (egg-laying). Some species stay with their eggs until they hatch, but most do not. Oviparous snakes usually abandon their eggs once they’re done laying, and never return. Once hatched, the baby snakes never meet their mother.

The remaining 30% of snake species are live bearers, meaning they give birth to baby snakes. Live-bearing snakes normally don’t look after their young. The moment they’re born, the babies will leave their mother and fend for themselves.

Baby snakes don’t depend on their mother because they are precocial. They are born fully developed – they can see, hear, move and hunt straight away. Venomous species are born with fangs and venom, so they can defend themselves immediately.

There are some species of snake that stay with their mothers briefly after birth. However, snakes don’t look after their babies in the same way that mammals and birds do.

The vast majority of snakes abandon their young before they’ve hatched from their eggs. These species include:

In captivity, the above snakes may even eat their own eggs, if they aren’t removed straight away. This is because after some time has passed, the snake won’t recognize them as her own.

Snakes that don’t receive maternal protection don’t always survive. According to PLOS One, less than 10% of hatchling northern pine snakes survive to breeding age. They may succumb to predators, adverse weather conditions, starvation, or illness.

However, snakes make up for this with numbers. Most snakes have large clutches or litters, and will breed again year after year. This increases the probability that some of their young will live to adulthood, and create the next generation.

How Long Do Snakes Stay with Their Babies?

Although most snakes don’t take care of their young, there are a few exceptions. Some species of oviparous snakes, such as ball pythons, will incubate their eggs until they hatch. During this time, they stay with their eggs almost constantly, and fiercely guard them from predators.

Certain live-bearing snakes will also protect their young for a short period after giving birth. This gives neonates a chance to learn how to hunt, and escape predators, before they have to live independently.

Snakes don’t produce milk, or feed their young. They also don’t teach them survival skills in the same way that mammals do. But they do offer some protection against predators, and help keep their babies warm.

The most well-known examples of maternal snakes are pythons and vipers. Garter snakes and cobras also display some care toward their young, though not as much.

Pythons are egg-laying species. However, unlike corn snakes and other colubrids, pythons incubate their eggs. They lay their eggs in a pile, and wrap their bodies around the clutch. Some species will rapidly twitch their muscles, generating a small amount of heat to keep the eggs warm.

During the incubation process, pythons don’t eat. They’ll only leave their eggs temporarily to bask in the sun, if they get too cold. They are fiercely defensive of their eggs, and will strike at anyone who gets too close.

Most species of python will leave their babies as soon as they’ve hatched. But one species, the African rock python, goes a step further.

According to the Journal of Zoology, African rock pythons guard their babies for two weeks after they hatch. During this time, the neonates stay within their mother’s coils most of the time, only leaving to bask.

This level of parental care has a clear benefit for the babies. It allows the babies to grow to a larger size before they’re forced to fend for themselves. Larger snakes are less vulnerable to predators, can withstand lower temperatures, and feed on larger prey.

Most species in the family Viperidae, are viviparous (live-bearing). This includes, among others:

Although vipers may seem intimidating, they are exceptionally caring toward their young.

Scientists have known for decades that viper neonates stay close to their mothers. However, up until recently, they thought that this was a coincidence. It was believed that the babies merely sought the protection of the den itself, rather than their mother.

A study by Cornell and Stetson Universities, however, proved otherwise. The researchers found 33 species of viper that exhibit parental care.

Viper mothers defend their babies, and they will instinctively return to each other if they are separated. Viper babies stay with their mothers until they are around 2 weeks old, or until their first shed.

In rattlesnakes, this has an added benefit. Rattlesnakes can’t produce their characteristic warning rattle until they have shed at least twice. Being protected until their first shed increases the likelihood that they will survive until the second. Once they can rattle and ward off predators, it’s less likely they’ll be eaten.

Being viviparous (live-bearing), garter snakes carry their babies around with them until they’re born. Once the babies are born, they stay near to their mother for a period of several hours to a few days. The precise time can vary greatly.

Garter snakes are a social species that will naturally aggregate, or live together, in the wild. This is a rare trait, as most other snakes only seek the company of other snakes during brumation.

In captivity, garter snakes are one of the only types of snakes that can be housed together. Many garter snake owners find that cohabiting makes their snakes calmer and less nervous.

It’s safe to house a garter snake with her babies. Although she won’t particularly care for them, she won’t eat them or fight with them either. This is more than can be said for most other species of snake.

King cobras are the largest type of cobra, and one of the longest venomous snakes in the world. Despite their fierce appearance, these snakes have a strong maternal instinct. They are the only species of snake that builds a nest for their young.

In the spring, a gravid (pregnant) female king cobra will build a nest using leaves and twigs. These nests can be up to 4 feet in diameter. When the nest is built, she’ll lay between 6 and 40 eggs, and guard them until they hatch. This can take up to three months.

Interestingly, male king cobras have also been observed guarding the nest, too. They will act aggressively towards any animal that approaches the nest.

But neither male nor female king cobras care for their young once they hatch. Just before the babies are due to hatch, they will leave the nest and never return.

This is probably because king cobras are ophiophagous – they hunt other snakes. If they stayed around their babies, their hunting instinct may cause them to eat them.

Other cobra species also exhibit some parental care. Shield-nosed cobras dig holes to lay their eggs in, and will guard them until they hatch.

Sea snakes, such as the yellow-bellied sea snake, have some of the most toxic venoms of all serpents. They are also live-bearing, with the exception of the genus Laticauda (sea kraits).

These nurseries are situated in shallow waters, away from trawling grounds and dangerous areas of the ocean. Baby sea snakes stay in the nursery together until they’re at least a year old. During this time, they eat small fish and hide from predators in sea grasses.

A mother sea snake doesn’t stay with her babies for long after they’re born. But by giving birth to them in a nursery, where they’re safe from predators, she helps to protect them all the same.

How Do Baby Snakes Survive in the Wild?

Not all snakes are lucky enough to have their mother’s protection when they’re young. Most species of snake have to fend for themselves from the moment they hatch (or are born).

But snakes have been around for millions of years, and have evolved to cope well with this. Being precocial, snakes are born with all the instincts they need to survive. They can hunt from birth, though they are limited to eating tiny animals.

Some juvenile snakes have adaptations to help them hunt, which they lose as they reach adulthood. Copperheads and water moccasins are born with bright yellow-green tail tips, which they wriggle to mimic a worm. According to the British Ecological Society, this helps them to lure frogs.

Unfortunately, though, not all baby snakes survive to adulthood. Juvenile snakes are often eaten by predators, such as birds of prey, skunks, and other snakes. It’s hard for baby snakes to defend themselves, especially if they’re nonvenomous. They rely mostly on camouflage, but this isn’t always successful.

Baby snakes in temperate climates, such as the U.S., are also at risk of freezing in cold weather. They often die if they can’t find their way to a hibernaculum in the winter.

What Do Baby Snakes Eat?

Mother snakes don’t feed their young. Baby snakes need to find their own food right away, and this can be difficult.

The food that a baby snake will eat depends on its species. Water snakes, cottonmouths and garter snakes may eat small fish and leeches as well as the above.

In captivity, baby snakes usually feed on newborn mice. These are called pinkies, and they are less than an inch long. However, some baby snakes are so small that they can’t manage to eat whole pinkies. Hatchling hognose snakes often have to eat small parts of chopped-up pinkies.