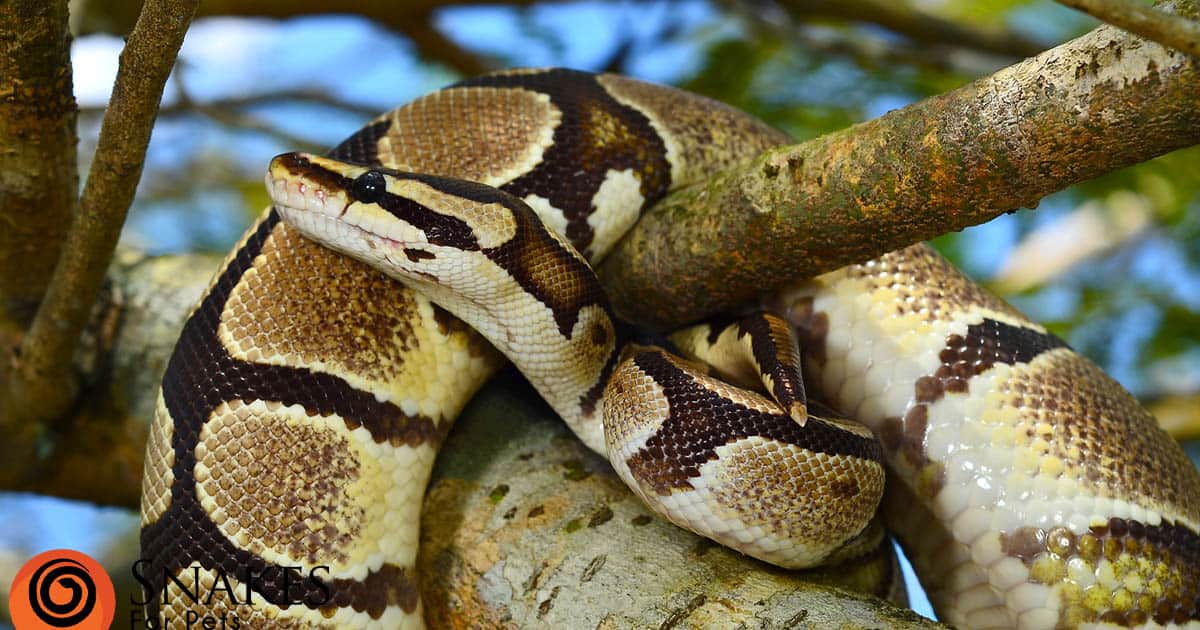 Ball pythons (Python regius) are skilled ambush predators. However, they don’t rely on their eyesight to hunt prey. Ball pythons have relatively poor vision, but their other senses more than compensate for it.

Ball pythons are short-sighted, so they can’t see far away. They can only focus on moving objects, and can perceive a limited range of colors. Because they spend most of their time underground, ball pythons have no need for good vision. Instead, ball pythons have a highly developed sense of smell, and can detect infrared radiation.

Although ball pythons have rudimentary eyesight, they can recognize certain objects and find their way around. A ball python’s vision is very bad during shed, when their eyes cloud over with fluid.

How Well Can Ball Pythons See?

If you’ve ever suspected that your ball python can’t see well, you’re right. For an efficient hunter, ball python vision is surprisingly poor.

Ball pythons, along with most other snakes, don’t rely on their vision as strongly as we do. They don’t depend upon sight to find their way and stay out of danger, as we do.

Ball pythons can see, but their eyesight isn’t well developed. They are short-sighted, so they can’t see distant objects. They can only perceive something if it’s close to their face.

They also struggle to see inanimate objects. A ball python can only focus well on something if it’s moving.

To make up for it, ball pythons have a highly developed sense of smell. Their forked tongue can pick up microscopic chemical particles in the air. They can detect the smallest trace of scent from far away, and figure out where it’s coming from. This allows them to navigate, identify prey, and find a mate.

The reason ball pythons can’t see well is because there’s no need to. Wild ball pythons spend most of their time in underground burrows, or termite mounds. They are ambush predators, so they don’t often chase their prey. Instead, they lie in wait for prey to pass by, and then attack.

It was previously thought that all snakes had monochromatic (black and white) vision. But according to the Journal of Neuroscience, ball python retinas have two types of cone cells. This means they likely have dichromatic color vision.

Humans have three types of cone cells, which give us trichromatic vision. We can see three primary colors of light: red, blue, and green. We can also perceive all the colors derived from them. For example, when a red and green light is combined, we see yellow.

Because ball pythons have dichromatic vision, they can only see two colors. It’s unclear exactly which colors ball pythons can and can’t see, as we can’t look through their eyes. But research suggests they can probably perceive blue and green.

Can Ball Pythons See In the Dark?

Ball pythons are nocturnal creatures. They rest during the day, and move around at night, to seek out food and mates. Being active at night means less chance of being eaten by predators that hunt in the day.

Because of this, ball pythons have evolved to see reasonably well in the dark. Although a ball python’s eyesight isn’t particularly good, their night vision may be better than our own.

According to the Journal of Experimental Biology, ball pythons have high concentrations of photoreceptive rods in the retina. These rods allow them to see better in low light levels.

They also have special cones in their eyes that allow them to see ultraviolet light. UV light is invisible to us, as it’s outside the range of human vision. But ball pythons can detect it, meaning they can see better at night.

As well as having night vision, ball pythons can detect infrared radiation, which is given off by heat. So, ball pythons have some form of ‘heat vision’. However, they don’t use their eyes to see it.

If you look at your ball python’s face, you’ll see little holes or pits along its top lip. According to Nature, these pits are lined with nerve fibers that contain infrared-sensitive ion channels.

Infrared radiation is given off by anything hot. The highly sensitive pit organ can detect it from up to one meter away. Ball pythons feel the heat, rather than see it, but they can sense precisely where it’s coming from.

This allows ball pythons to detect prey animals in their vicinity, and identify warm places to hide. They depend much more on their infrared sense than on their sense of sight.

A ball python could find a mouse in a pitch-black room. But it would only recognize it as food if it was warm. This is why most ball pythons won’t eat frozen-thawed rodents unless you heat them up.

Albinism is a genetic condition resulting in a lack of melanin (dark pigment). In snakes, it affects the skin and eyes. Albino ball pythons have white and yellow skin, with bright red eyes instead of the usual brown.

It’s common for albino animals to have poor eyesight. This is because part of the retina, called the macula, is underdeveloped. It also lacks melanin, and is more sensitive to light damage.

Because ball pythons can’t see well in the first place, it’s hard to tell if albino ball pythons have worse eyesight. Ball pythons rely mostly on smell and infrared detection to get around. So if a snake couldn’t see as well, it may be hard to tell.

Albino ball pythons aren’t blind, but some individuals may display signs of poor vision. They may miss their prey when trying to eat, striking next to the mouse instead of directly at it. They may also seem unsure of themselves when moving around, and bump into things.

If you think your albino ball python has poor vision, you needn’t be concerned. Ball pythons don’t depend on their sight to survive. Providing it can eat, your snake will still live a full and happy life.

Why Does My Ball Python Have Cloudy Eyes?

Once every 4 to 8 weeks, ball pythons shed their skin. During this process, it’s normal for your ball python’s eyes to look cloudy or opaque.

A ball python’s eyes are covered in specialized scales called ocular scales or eye caps. These scales are part of the skin. So when your snake sheds, the eye caps will come off and be replaced with new ones.

During the pre-shed phase, your ball python’s old skin starts to loosen from the new layer underneath. To aid this process, a layer of milky fluid builds up between the new and old skin layers.

It’s this fluid that makes your ball python’s eyes look cloudy. When you notice this, it means your snake is in the “blue phase”, and is almost ready to shed.

During the blue phase, your ball python isn’t blind, but it can’t see as well as usual. This can be stressful, so it’s best to leave it alone during this time.

Within 72 hours, your ball python’s eyes will clear up, and it will shed. Afterwards, you’ll find an intact piece of skin somewhere in the vivarium, complete with eye caps.

If the humidity in your ball python’s enclosure is too low, it may have trouble shedding its eye caps. Retained eye caps can result in vision problems and eventual blindness if they’re not dealt with.

It is rare, but possible, for a ball python to go blind. There are several reasons why this might happen to your snake:

Signs of ball python vision problems include moving less, or seeming more hesitant when moving around. Your snake may frequently bump its head against objects in its enclosure. It might also seem reluctant to eat, as it can’t see its prey.

All of these symptoms, however, can also be indicators of other illnesses such as Inclusion Body Disease (IBD). If you’re concerned about your ball python’s health, take it to a veterinarian for an assessment.