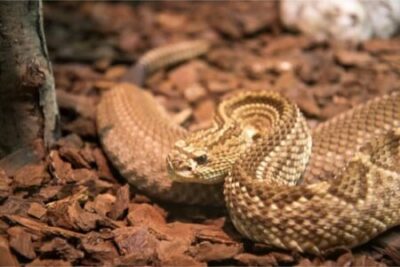 Rattlesnakes are one of America’s most dangerous snakes, bite more people than any other snake, and are responsible for the most deaths. So, it’s absolutely crucial that you find out when are rattlesnakes are most active and know how to avoid coming into contact with them.

Snakes are good at adapting to conditions. That’s why you can find them on every continent, barring Antarctica, and anywhere north of the Arctic Circle. They’ve adapted to desert environments by learning how to avoid the heat. And they’ve adapted to colder habitats by avoiding frosty nights. Let’s find out more about how rattlesnakes adapt to their environment.

Are Rattlesnakes Nocturnal or Diurnal?

Diurnal means that something is active during the day. They’ll carry out all of their activity during the day, but sleep at night.

Crepuscular means that an animal is active at dusk. Rattlesnakes are crepuscular throughout the spring, summer, and fall. That’s because the temperature isn’t too hot or too cold.

Why Do Rattlesnakes Come Out at Night?

Rattlesnakes are nocturnal because they need to regulate their temperature. Snakes are cold-blooded. This means that they don’t generate their own body heat. Instead, they rely on the heat of the sun:

So, if they like the sun so much, why do they come out at night? Well, the midday summer sun is far too hot for rattlesnakes.

They can’t regulate their temperature in any way, either by heating themselves or cooling themselves down. If they get too hot, this causes all sorts of health problems.

But during spring and fall, it’s warm enough that they can be active but not too hot. Then, when it’s too cold, they’ll retire to their den for the winter.

Do Rattlesnakes Hunt at Night?

All snakes rely on their sense of smell for hunting, detecting chemicals in the air that draw them closer to their prey.

They use their tongue to flick the air, catch these chemicals, and then use special organs located in their nose to figure out where the smell is coming from. This helps all snakes to hunt for prey during the night.

But rattlesnakes are pit vipers, which means that they actually have an added advantage. According to Nature, not only are they exceptionally good at smelling their way around, they have an extra organ—an infrared heat-sensing pit.

These pits are tiny holes on their face, in which there’s a thin membrane. This membrane can detect the most minute changes in heat. They can use these pits to detect the warmth of a mouse, rat or another prey item up to three feet away.

Rattlesnakes are ambush hunters. So, they lie in wait for prey to come to them, rather than chasing it down. All they need are their heat-sensing pits to hunt, even if it’s completely dark.

Of course, during the day, they can use both their vision and their heat-sensing pits to sense prey.

Can Rattlesnakes See at Night?

Instead, their eyes are sensitive to movement. This is because they lack something called a ‘fovea,’ which is a small pit inside the eye. The fovea is responsible for focused and detailed vision.

As for whether rattlers can see well at night, they definitely can. That’s because they have plenty of ‘rods’ in their eyes. The eyes work because of different kinds of cells: rod cells and cone cells.

Rod cells are far more sensitive to light than cone cells, which means that they’re almost solely responsible for night vision. With just a tiny amount of light from the stars and the moon, rod cells help you rattlesnakes to see clearly. Cone cells, on the other hand, help rattlers to see in color.

Because rattlesnakes have lots of cone cells, their night vision is excellent. They also have quite a few cone cells, too, so scientists are sure that they can see in color. All that they’re lacking is more detailed vision.

What Temperature do Rattlesnakes Become Active?

Rattlesnakes brumate from late fall up until early spring. You’ll start seeing them come out in late March or early April. There is no precise date.

Also, some snakes will start becoming active earlier than others. However, the springtime is mating season for rattlesnakes, so expect to see plenty out and about. Once temperatures start to head north of 60 degrees, you’ll start seeing some rattlesnakes.

During the summer, you can expect to see them in the morning or at dusk. They’re happiest at 80 or 85 degrees, so early mornings and dusk during summer days are fine for them. But when the temperature hits higher than 90 or 95, rattlesnakes have trouble regulating their temperature.

Beyond that, a temperature of 105 or 110 would kill a rattlesnake. So, if it’s hot outside, there won’t be any rattlesnakes bothering you. If they’re not in their dens, they’ll be catching some shade under a cactus or log.

Rattlesnakes will start to become less active the colder it gets. If you’re in timber rattlesnake country, which includes the north even up towards Canada, these snakes might brumate from September onwards when temperature dip below 60.

Eastern or western diamondbacks will hibernate later, because temperatures stay warmer for longer. You might also see them sunning themselves during periodic warm weather in late fall and winter.

Where do Rattlesnakes Go When They’re Not Active?

Rattlesnakes have dens, more appropriately termed hibernacula, where they go to escape the cold or heat. For rattlesnakes, these are usually accessed through gaps or cracks in rocks. During winter (or unusually cold nights), it’s crucial that their den is below the frost line.

The frost line is the depth of ground below which soil, or anything else, doesn’t freeze during cold weather. If the snake has to endure freezing temperatures, it won’t survive. So, they head into deep dens to stay alive.

Rattlesnakes have favorite dens. They head back there year after year when it’s time for them to hibernate. Scientists aren’t exactly sure how they remember where their den is, but it might be pheromone trails.

MLA Style: Carter, Lou. "Do Rattlesnakes Come Out at Night or During the Day? (With Video)" Snakes For Pets, (December 16, 2020), https://www.snakesforpets.com/do-rattlesnakes-come-out-at-night-or-during-the-day/.

APA Style: Carter, L. (December 16, 2020). Do Rattlesnakes Come Out at Night or During the Day? (With Video). Snakes For Pets. Retrieved December 16, 2020, from https://www.snakesforpets.com/do-rattlesnakes-come-out-at-night-or-during-the-day/