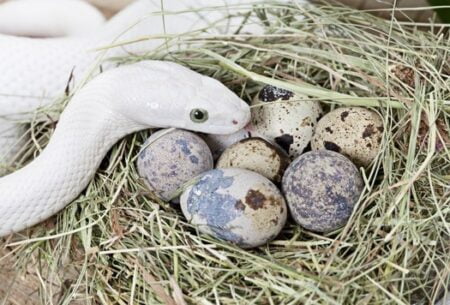 Many species of snakes eat eggs, as part of their natural diet. You may wonder if snakes eat their own eggs, too. Although it’s uncommon, this has been known to happen, especially in captivity.

Snakes don’t usually eat their own eggs. Most snakes abandon their eggs after laying them. Some snakes stay with their eggs until they hatch, and these snakes instinctively protect their eggs. However, snakes may eat infertile eggs to stop them from rotting and contaminating the rest of the clutch. Snakes may also eat their own eggs if they’re stressed, sick, or starving.

Pet snakes occasionally confuse their own eggs for food if they’re left in the vivarium too long. This is why you should always remove your snake’s eggs as soon as she’s finished laying them.

Will A Snake Eat Its Own Eggs?

Some wild snakes, such as kingsnakes, will also eat other snakes and their eggs. But no snake will eat its own eggs, unless something is wrong.

This would be counterproductive to the survival of the species. If a snake ate its own eggs, its offspring would never grow to adulthood and reproduce. Within one generation, the species would become extinct.

Most snakes have a natural instinct to abandon their eggs as soon as they’re finished laying. This eliminates the risk of them eating their own eggs. They don’t return to the nest, so they never see their eggs again.

Maternal snakes, such as ball pythons, instinctively protect their eggs. They stay wrapped around them until they hatch, and they don’t hunt or eat during this time. So they wouldn’t eat their own eggs, either.

However, in captivity, some snakes may eat their own eggs. This is sometimes accidental, but it can also be a survival instinct triggered by stress.

Do Mother Snakes Eat Their Babies?

When an animal eats its offspring, this is called filial cannibalism. It’s commonly seen in mammals, such as hamsters and cats.

According to Frontiers in Ecology and Evolution, this can be a form of parental care. When there are too many offspring for the mother to feed, she’ll eat the weakest ones. This improves the survival chances of her remaining young.

Snakes that give birth to live babies, such as rattlesnakes, may also eat their young. But this is for a different reason. Rattlesnakes eat nonviable offspring as a way of recycling energy, as reported in Animal Behavior.

However, most snakes lay eggs, and abandon their eggs before they hatch. So, most snakes would never meet their babies, let alone eat them.

A snake may eat her own babies in captivity, if you house the mother and babies together. It’s particularly likely in ophiophagous (snake-eating) species, such as kingsnakes. This is why you should remove the eggs from their mother before they hatch.

Why Is My Snake Eating Its Own Eggs?

Although it’s uncommon, some snakes will occasionally eat their own eggs in captivity. If this happens to you, you’re probably wondering why.

In all likelihood, you probably haven’t done anything wrong. Snakes aren’t particularly intelligent creatures, and sometimes get confused when confined to a small space. Your snake probably mistook its egg for a snack, and this triggered a feeding response.

However, working out why your snake is eating its eggs will help you to prevent it from happening again. There are three main reasons why snakes may eat their own eggs.

1/ Your Snake Doesn’t Recognize Its Eggs

Some snakes, such as ball pythons, stay coiled around their eggs until they hatch. According to Evolutionary Ecology Research, this maternal instinct helps the hatchlings to thrive.

But most species of snakes don’t do this. Snakes such as corn snakes, kingsnakes, and bull snakes instinctively abandon their eggs when they’re finished laying. This prevents them from mistaking their own eggs as food.

This can cause a problem in captivity. Being confined to their enclosures, pet snakes can’t get away from their eggs. After sufficient time has passed, they may no longer recognize their eggs as their own. So unless you remove the eggs, they may eat them.

This is particularly likely among species that would eat snake eggs in the wild, such as hognose snakes.

2/ The Eggs Are Infertile

Not all snake eggs are healthy. When a snake lays a clutch of eggs, it’s normal for a small percentage of them to be infertile. Infertile eggs, called slugs, won’t develop or hatch.

After laying her clutch, a snake may inspect the eggs and eat any slugs. This is an evolutionary instinct which serves two purposes:

Slugs can usually be recognized by their appearance. They are smaller than healthy eggs, and usually have a yellow or brownish tint to them. However, some slugs look extremely similar to fertile eggs, so it can be difficult to tell.

3/ Your Snake Is Stressed or Sick

A stressed snake will act as if there is an impending threat. This might result in your snake eating her own eggs.

In a snake’s mind, it’s better to eat her own eggs than for a predator to eat them. That way, at least she can regain the nutrients she lost by laying them. Stress in snakes can be caused by:

Illness can also cause confusion and unusual behaviors in snakes. Sick snakes have even been known to mistake their own tails for prey, and start eating themselves.

What to Do If Your Snake Eats Its Own Eggs

If you notice your snake eating its own eggs, don’t panic. Your snake isn’t in any danger. Although you can’t save the eggs that have been eaten, you can safeguard the rest of the eggs. You should also assess your snake’s health and living conditions.

It’s likely that your snake ate some of its own eggs because they were infertile or non-viable. If this is the case, your snake won’t eat any of the healthy eggs.

But if your snake is eating healthy eggs, for any reason, it may eat the whole clutch. Remove any remaining eggs from your snake’s vivarium so your snake can’t access them.

Assess the remaining eggs to determine their health. You can ‘candle’ the eggs to see whether they’re fertile.

Hold a flashlight up against the egg. If the inside of the egg looks red, and has veins, the egg is viable. If you can’t see any veins and it looks yellow or clear, it’s infertile and can be discarded.

Place any healthy eggs into incubation to help them develop. See our guide on how to incubate snake eggs at home.

Your snake won’t get sick from eating its own eggs. However, if your snake has eaten a lot of its own eggs, there’s a chance it may regurgitate. This is unlikely if it has only eaten one or two.

Regurgitation can be dangerous in snakes, causing stress on the internal organs. If your snake eats again too soon after regurgitation, it’s likely to happen again. This could cause damage to the stomach.

For the first 48 hours after your snake eats its own eggs, keep a close watch on it. Don’t handle your snake, and don’t give it anything to eat.

If regurgitation occurs, remove the regurgitated eggs and clean the vivarium. Ensure your snake has a supply of clean water.

Avoid feeding your snake for at least 7 to 10 days after regurgitation. This gives the digestive system time to heal.

Unfortunately, you can’t save the eggs that your snake has eaten. However, you can try to figure out why your snake ate its own eggs in the first place. That way, you can prevent it from happening again. Assess your snake’s environment for any potential stressors, such as:

Also, weigh and measure your snake to get an idea of its body condition. Your snake may have eaten its own eggs out of desperation because it was starving.

If you can find nothing wrong, it’s likely that this was a one-off incident. In the future, remove your snake’s eggs the moment they’re laid, to reduce the likelihood of it happening again.

Is It Bad For a Snake to Eat Its Own Eggs?

It isn’t dangerous for the mother snake to eat its own eggs. Snake eggs aren’t poisonous or harmful, and they can digest them with ease.

Even snakes that don’t typically eat eggs in the wild will have no issues eating their own eggs. They’re designed to eat infertile eggs to help the other eggs survive, and regain lost nutrients.

Unlike bird eggs, snake eggs are soft and pliable. They have a leathery exterior, rather than a hard, calcified outer shell. So if an egg broke inside your snake, it wouldn’t get hurt.

The only thing to be aware of is the issue of mold. Snake eggs can go moldy if they are infertile, or if the vivarium’s humidity is too high.

Mold is bad for snakes as it contains fungal spores that can cause disease. If your snake ate a moldy egg, it could get sick. If you’re not sure how old the eggs were when eaten, monitor your snake for signs of illness. A veterinarian will be able to assess your snake.