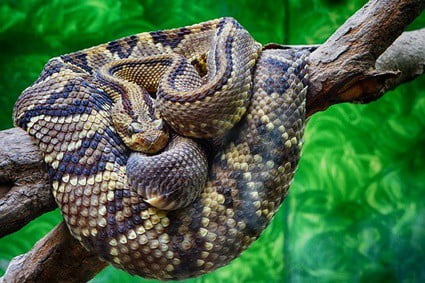 Snakes have regular bowel movements. If your snake hasn’t passed feces for several weeks, you’ll need to determine if your snake is constipated.

Blocked bowels are a common occurrence in snakes that are fed frozen-thawed food or ingest their substrate (bedding). Frozen food has less water present which can result in dehydration and dried feces. Other reasons for constipation in snakes include overfeeding and a low temperature inside your snake’s enclosure.

Sometimes a snake’s constipation is due to a bowel obstruction, which occurs when an animal consumes something it cannot digest. Along with the inability to poop, an impacted snake may show other signs, such as lethargy and loss of appetite.

What is Snake Impaction?

Impaction occurs when a snake ingests something that its body cannot digest. Substrate impaction can happen when a snake is provided with bedding made of sand, walnut shell, sawdust or other fine particles that can be accidentally ingested. Snakes can consume their bedding in 2 ways:

Sand and walnut shell substrates are also drying. When placed in a tank, they tend to soak up atmospheric moisture, reducing the humidity of your snake’s environment. When ingested, these impacted particles dry up your snake’s feces, making it harder for it to be passed out.

How Long Does it Take a Snake to Poop?

In some snakes, such as rat snakes, poop doesn’t remain internally for too long, leaving the body just 2 days after eating.

Arboreal snakes and other relatively slender snakes, such as tree pythons and bush vipers take around 3 to 7 days after eating to defecate.

In heavy-bodied henophidian snakes, such as boas and pythons, feces can remain in the hindgut for months before it is released. The maximum recorded time taken by a Burmese python to poop is 126 days, 386 days for a blood python, and 76 days for an emerald tree boa.

Part of the reason some snakes take as long as several months to poop is that they let their digestive systems’ atrophy between feedings. Since snakes eat only a few times a month, they have to repress their organs and proteins to conserve their energy.

When they eat, their organs grow back in size to digest the food and make up for increased oxygen consumption during digestion. According to Stephen M. Secor and Jared Diamond, each time a python eats, its digestive tract, pancreas, heart, lungs, kidneys, and liver increase in size (hypertrophy) by 50 to 100% within 1-3 days.

Snakes have a relatively high energy cost during digestion and in rebuilding proteins and organs that have atrophied during fasting. The authors explain this regulatory system using an analogy of driving a car. You don’t stop your engine during a brief stop, but you will stop it to save fuel if you have to wait for a train to pass.

By repressing their organs, snakes can save energy during prolonged fasts, according to the Journal of Experimental Biology. As their metabolic rate and gut size changes, so does their ability to absorb nutrients.

Infrequent feeders have lower metabolic and nutrient absorption rates. Therefore, the rate at which their bodies produce feces is much lower.

Some snakes can hold a lot of feces in their intestines. Termed as the “adaptive ballast” hypothesis by Lillywhite et al., some snakes retain their feces for a hunting advantage in capturing large prey.

Stored feces are an easily-changeable element that can add to a snake’s body mass. Unlike muscle, this inert mass requires little-to-no energy to maintain as long as it doesn’t have to be dragged around much.

Pythons are sedentary reptiles that ambush their prey, instead of chasing them, so they don’t mind the added weight. The added mass which is saturated in the posterior region of a snake’s body increases the inertia of this region and its friction on the ground.

Furthermore, these snakes can quickly release their feces, reducing their body mass by as much as 20% when it becomes a liability. This can be when the snake is gravid, before hibernation, moving long distances, or right after a new meal.

For some snakes, holding feces to add mass is not advantageous. For example, arboreal snakes cannot climb with the added weight. Therefore, these snakes defecate on a more regular basis after eating.

What Causes Constipation in Snakes?

If your snake is taking longer than usual to go to the toilet after its meal, the chances are that it’s constipated. Constipation can be uncomfortable and sometimes painful for snakes.

Furthermore, if a snake’s feces or urates are lodged in its body, there could be a risk of systemic infections or organ failure.

One common cause of dehydration and subsequent constipation in snakes is feeding frozen-thawed food. Frozen mice have less water present in them compared to when they’re live or fresh.

Since snakes get most of their water from their food, a diet that’s high in frozen food may cause their feces to become drier and harder than usual. Hardened stools are called fecoliths or fecal stones. A fecal stone can obstruct the passage of poop out of a snake’s body.

Another major cause of dehydration is not providing enough water. This can also cause a lack of colon movement. The longer the feces stays inside the colon, the drier it gets as their body draws more water from it to make up for the lack of water consumed by the snake. This hardens the stool, resulting in constipation in snakes.

A lower-than-required temperature in your snake’s environment can cause the snake to conserve higher temperatures deep within its body to carry out its internal functions.

Low humidity can have a similar effect in your snake’s body. The lack of moisture in the environment may dehydrate its feces, preventing it from being smoothly passed out.

Impaction can occur when a snake ingests particulate substrate, which includes sand, gravel and aspen shavings. The inability to digest foreign matter may lead to obstructed feces.

Overfeeding results in obesity in snakes. Obesity can reduce the movement of the colon, but not the ability to absorb water from urates and feces. In snakes, urine is produced in the form of semi-solid uric acid salts, called urates. A common cause of obesity is the hardening of urates inside a snake’s body.

Reptiles don’t have a separate opening for their feces and urine to pass from their bodies. Instead, they have one cloacal opening. Commonly known as the vent, the cloaca is found on the underside of the reptile’s tail. The cloaca received urates from the kidneys, feces from the colon, and babies/eggs from the oviduct. These leave the body via the cloacal opening.

As the colon absorbs more water from the urate suspension, it creates a harder urate plug that builds up inside the snake’s digestive tract. This blocks the passage of feces, resulting in constipation.

Most snakes will continue eating even while constipated until their gut is so full, it becomes intolerable. At this point, the snake is severely ill and will require immediate attention from a vet.

Other causes for constipation include severe parasitic infection and partial paralysis from a nutritional disorder or injury.

Signs of Constipation in Snakes

If you’ve had your snake for a while, you’ll be aware of its bowel movement routine. While a slight deviation in its routine may not be a cause for concern, any abnormalities in your snake’s mood, body or appetite accompanied by the lack of feces may be an indication for constipation. The following are signs of constipation and impaction in snakes:

Treatment for Constipation in Snakes

If you suspect your snake is constipated, start by bathing it in warm water in a tub. Allow your snake to soak for 10 to 15 minutes.

Soaking in warm water will soften any fecolith or urates, allowing the waste to leave smoothly. A warm water bath can also help your snake relax, making it easier for it to pass a hardened stool.

While your snake is soaking, gently massage its belly for 5 to 10 minutes, rubbing from its sternum to its cloaca. Rewarm the water as needed. This treatment should get your snake to poop within 24 hours. Consider adjusting the environment, making it warmer and more humid.

To raise the humidity of your snake terrarium, consider substrates that hold humidity well, such as cypress mulch. Changing the location of your terrarium to somewhere away from direct sunlight or an air conditioning vent can also help.

Snakes that are partially paralyzed due to metabolic bone disease will have to be soaked and massaged daily to avoid the buildup of waste. If your snake shows no signs of improvement, take it to a herp vet.

Avoid trying to administer enemas or laxatives yourself without consulting your vet as many products can be fatal for snakes. Moreover, snakes may require a much lower dose than most mammals.

Your vet may begin treatment with mineral oil or milk of magnesia enema. This will often result in a large mass of feces and urates being released.

Your vet may examine the feces under the microscope to look for any microorganisms that may have built up while your snake was constipated. Note that these microorganisms aren’t the cause for your snake’s constipation, but are just an accumulation of internal parasites that haven’t been released with your snake’s poop.

However, when in high numbers, these parasites can result in infection, which may have to be treated with the antibiotic, metronidazole.

Alternatively, the vet may administer mineral oil as an oral laxative, but the results may take longer. Your vet may also recommend adding some mineral oil to your snake’s prey. It may take up to a week for your snake to poop after taking mineral oil, but if its constipation is still in its early stages, this should work.

If the hardened stool is very impacted and your snake has a swollen abdomen, it may have to be removed surgically. However, with proper care, your snake should recover well following the procedure.

How to Prevent Constipation in Snakes

Husbandry errors cause problems for captive snakes. The following are some ways you can correct them and avoid constipation.

Snakes rely on external temperatures for thermoregulation. A common cause of impaction is low temperatures in the basking region.

Therefore, create a temperature gradient in your snake’s environment by providing heat at one end of the terrarium. This can be done using basking lights, heat mats or creaming heating elements.

Lack of water can cause dehydration, causing it to absorb water from its urates and feces. This can create a fecal stone or urate plug.

Provide your snake with plenty of fresh water for it to drink and soak in. Including a bigger water dish can also help raise the humidity levels inside the vivarium, preventing constipation caused by low moisture levels.

If you have a burrowing snake, use lower-risk substrates, such as cypress mulch or shredded paper, instead of sand or walnut shell bedding.

If the vivarium is cluttered with unnecessary décor, consider reducing the items down to some horizontal branches or pipes, a couple of hides and some small live plants.

Many snake owners overfeed or powerfeed their snakes to make them bigger faster. However, doing so not only increases their risk of obesity, but can also lead to digestive problems, such as constipation. Most adult snakes only require a medium-sized mouse once a week.

Regular handling can also help prevent constipation. Furthermore, it allows you to keep a lookout for any underlying issues that may have gone unnoticed while your snake is in its cage.