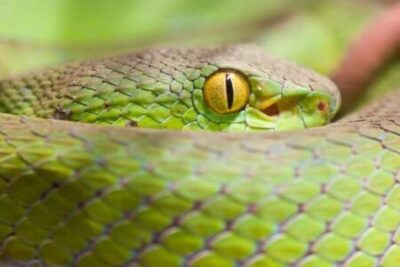 If you observe a snake closely for a while, you’ll notice that snakes don’t appear to blink at all or have any eyelids. It seems logical that they’d want to protect their eyes from dust, dirt, and scratches from prey.

Snakes have spectacles, which are transparent rounded lenses that protect the eyes from dust and scratches. These eye caps are made from the same material as a snake’s scales. They are solid and immovable, meaning that snakes never blink. The spectacles are replaced each time the snake sheds.

This unique adaptation also has disadvantages because it affects the snake’s vision. We’ll take a closer look at what snake spectacles are and how eyecaps protect a snake’s eyes from damage.

Does a Snake Have Clear Eyelids?

Snakes do not have eyelids. According to BMC Veterinary Research, every snake species has clear spectacles covering its eyes.

These are basic coverings of the eyes. Instead of having one eyelid on top and one on the bottom, the spectacle covers the entire eye.

Despite every snake having the same feature, the thickness of the spectacle is different in each species. Specifically, the spectacle is thicker in aquatic and fossorial (burrowing) snakes. The spectacle likely first evolved in these burrowing snakes, as they have the most need for eye protection.

What’s interesting is that snakes originally had eyelids, like other animals. This is known because snake embryos have regular eyelids that fuse together and form a clear spectacle before it hatches.

What Are Snake Eye Spectacles?

A snake’s eye spectacles are made from the same material as the rest of its scales. That’s because the spectacle evolved from the regular scales on a snake’s body. The only difference is that the scale is see-through.

Here are the pros and cons of eye spectacles in snakes:

The clear scale that sits over a snake’s eye is known by other names. They are also known as ‘brilles’, ‘eye caps’, or ‘ocular scales’.

Do All Snakes Have Spectacles?

Every snake species and subspecies have spectacles, but the kind of spectacle the snake has depends on where it lives and how it hunts. The difference is in how thick the scale is.

Burrowing snakes and aquatic snakes have the thickest spectacles, and they are thicker in constrictors as a rule. That’s because constrictors have to bite down on prey and kill them more slowly than a venomous snake can.

An African bush viper, for example, has the thinnest spectacles studied by science so far. There are several reasons why:

This has led to the thinning of its spectacles to around 74 micrometers. Other species’ eyecaps are several times as thick, like the red-tailed pipe snake, which can have eyecaps as thick as 300 micrometers. But there is no snake that has no eyecaps at all.

How Do Snakes See Through a Spectacle Scale?

While the spectacle is transparent, this doesn’t mean it has no effect on the snake’s vision. There are three ways that it might:

The most interesting of these issues is the curvature of the spectacle. According to Vision Research, the spectacle is almost as curved as the lens of the eye, the job of which is to refract light.

The more curved the lens, the wider the field of view. A fish-eye lens is an example of a highly curved lens. The snake’s view of the world is ‘likely’ distorted like a fish-eye lens. However, no studies have confirmed this.

As for the spectacle getting dirty, this is fixed by the snake shedding its skin periodically. The lens cap is shed at the same time as all other scales. When this occurs, the new spectacle which forms underneath is clean and free from scratches.

If you told a non-snake owner that a snake has a scale over its eyes, they would likely ask how the snake could see through it. Well, the scale itself has evolved to be see-through.

According to the Journal of Experimental Biology, when the snake is at rest, the vessels undergo cycles of constriction and dilation. They stay constricted (narrowed) most of the time, meaning that the snake can see. The scale is then relieved every now and then by dilation.

When the snake is hunting or threatened, the blood vessels stay constricted for longer. This allows the snake to view its surroundings more clearly. This is also partly the reason why snakes can’t see when they’re shedding, because at this time the blood vessels are fully dilated.

What Are Retained Eye Caps in Snakes?

A retained spectacle is an eyecap which hasn’t come loose when the snake shed the rest of its scales. It can occur if the snake lives in a dry environment or doesn’t get much water in its food. The eyecap sticks in place while another will form underneath it.

This poses another problem for the snake’s vision. With retained eyecaps, the snake struggles to see at all. In the wild, this would pose a significant risk as the snake would be at risk of predators.

Retained eye caps in captive (pet) snakes can be gotten rid of by bathing the snake for 10-20 minutes. You can then either:

If these methods don’t work, take the snake to the vet. Don’t try to dislodge them with tweezers or your nails.

How Do Snakes Blink without Eyelids?

Snakes don’t blink or wink, which is something you will observe if you watch a snake for long enough. They don’t even close their eyes to go to sleep. But while we can’t keep our eyes open permanently, snakes can because of their spectacles.

The reason this isn’t an issue is the spectacle fulfills the same needs that blinking does. According to Live Science, the purpose of blinking is to keep the eyes from drying out. Under the eyelids is a layer of oily mucous fluid that blinking spreads across the eyeballs.

This isn’t an issue for snakes because the spectacle keeps air away from the eyes. The other purpose of eyelids is to protect against dust, dirt, and wind. A snake’s spectacles protect against these things too, because it’s a solid layer between the eye and the external elements.