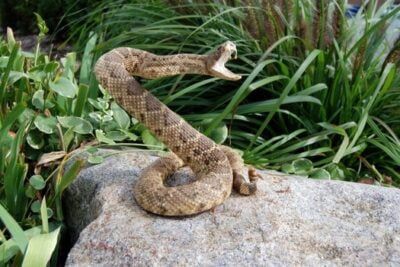 We vividly recall that striking image of a snake’s fangs. But, if you’ve never been bitten by a snake or looked inside its mouth, you might wonder if snakes have other types of teeth as well as fangs.

Most snakes have fangs at the front of their mouth, and some species can have up to 200 teeth running along their jaws. A snake’s teeth are usually covered by the gums.

Most snakes have several rows of teeth. They usually have four rows on the top and two rows on the bottom. However, the number of teeth, the arrangement of the teeth, and the number of rows are species-specific.

What Teeth Do Snakes Have?

Snakes have teeth in the following arrangement:

These teeth don’t meet in the middle in the way that human teeth do. Snakes don’t have a chin. They just two jawbones with nothing connecting them, which is why they are able to open up their mouth so wide.

If you take a look inside your snake’s mouth, you might not be able to see any teeth as they’re covered by the gums. That’s why you can see lots of teeth in a dead snake’s skull, but not many in a living snake’s mouth.

How Many Teeth Do Snakes Have?

Some species of snakes have hardly any teeth, whereas others have far more than humans. Here are some examples:

Are There Snakes Without Teeth?

If you take a look at a herbivore’s teeth, they don’t have fangs. Instead, they have molars, which are large and flat teeth that are perfect for grinding down vegetables, leaves, and grass.

Snakes are not herbivores, they are obligate carnivores. This means that they don’t eat anything other than meat.

Snakes only have the teeth that they need for their diet. These are their fangs for envenoming prey, and small teeth for holding onto prey.

You might think that some snakes don’t need teeth. Egg-eating snakes spring to mind. These are a group of colubrid snakes that have adapted to eat nothing but eggs—no live prey, no berries, no leaves or grass, just eggs.

So, why would an egg-eating snake need teeth? Perhaps to fight off predators. But concerning eating, teeth would only get in the way when their only food is so big and round. Imagine if you tried to eat an egg whole. It would be a lot easier if you didn’t have any teeth, wouldn’t it?

Instead, they have tiny bone spurs along the inside of their spine. These small protrusions help the snake to crack into the eggs once they’ve swallowed them.

There are three main kinds of snake fangs. Each has a similar use, but works differently. Some snakes also have regular teeth.

These are regular snake fangs, and aren’t that long because they’re fixed in place on the snake’s jaw. Snakes in the Elapid family have fangs like these, including cobras, mambas, coral snakes, and others.

Proteroglyphous fangs are hollow, which allows elapids to inject prey with concentrated venom. Small ducts connect the fangs to the venom glands, which are behind the mouth and to each side of the head. The venom shoots out of the gland, through the ducts, through the hollow fangs, and into the prey, killing/incapacitating it.

They’re attached to the jaw on a hinge, so that the snake can, in a way, retract them when they’re not in use. When they’re ready to strike, the snake will lower them down, and bite you faster than you can blink.

This allows the fangs to be much longer than those of your average snake. If they couldn’t fold them back up against the roof of their mouth, the teeth would get caught on their lower jaw.

Because they can fold, a rattlesnake’s fangs can reach six inches long, which is about the length of an adult’s hand.

The Opisthoglyphous fangs are located further back in the mouth, which makes it harder to deliver venom.

However, it also makes it more difficult for any prey to wriggle free from the snake’s clutches because the fangs point backward.

This gives constrictors more time to wrap themselves around their prey, which usually takes a few seconds. Some constrictors have a mild venom, such as garter snakes, that incapacitates their prey.

How Do Snake Fangs Work?

Snake fangs are like small hypodermic needles. They’re ordinarily hollow, or have a groove running down them, that carries venom.

Snake venom is made in the same way as saliva. But instead of producing saliva, snakes produce highly modified saliva that contains toxins that adversely affect the blood and tissue.

When the snake bites prey, it has compressor muscles that generate a tremendous amount of pressure in a very small space, essentially shooting the venom out through their hollow teeth.

Do Snakes Have Normal Teeth?

Some snakes have aglyphous teeth. These are like the fangs of other predators, such as cats. Snakes with these teeth usually have many. They’re like rows of incisors that go all the way up along the jaw.

Snakes don’t use these teeth for chewing. They use them for catching and keeping hold of prey. The teeth point backward, just like those of rear-fanged snakes (Opisthoglyphous teeth), so that the prey can’t escape.

What Are Snake Teeth Made Of?

A snake’s teeth are made up of the following:

Snake fangs are either hollow or have a very deep, almost closed-off groove running through their center. Snake teeth are ‘acrodont,’ which means that they’re connected directly to the bone of the jaw itself.

When Do Snakes Grow Teeth?

A snake’s teeth develop before they enter the world. Without teeth and fangs, a hatchling snake wouldn’t be able to eat its prey. As the snake grows, they’ll develop larger, longer teeth over time.

Snakes have quite thin teeth, and they break/snap fairly regularly. Snakes can regrow their teeth, and have backup teeth in their jaws. When one tooth falls out, it can use the backup as a replacement.

According to the International Journal of Oral Science, snakes are ‘polyphyodonts.’ They can replace their teeth during their lifetime. This works as follows:

This occurs through a snake’s lifetime. There’s no limit on the number of teeth that a snake can replace. Here are some other snake teeth facts.

MLA Style: Carter, Lou. “Do Snakes Have Teeth (Other Than Fangs)? (With Video)” Snakes For Pets, (February 2, 2020), https://www.snakesforpets.com/do-snakes-have-teeth/.