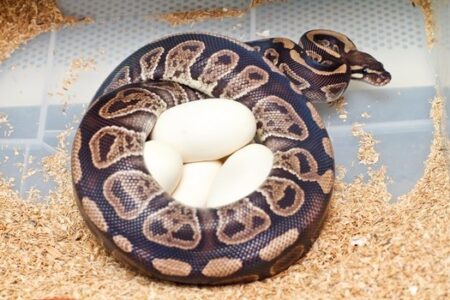 Snakes can be oviparous, viviparous, and ovoviviparous. This means that some snakes give birth to baby snakes, while others keep eggs inside their bodies or lay eggs in clutches.

Approximately 70% of snakes are oviparous, meaning that they lay eggs. Examples include milk snakes, corn snakes, and pythons. Species, such as rattlesnakes, are ovoviviparous. They keep their eggs inside of their bodies until they hatch. Other species, such as garter snakes and boa constrictors, are viviparous. They give birth to live babies, nourished by a placenta.

Snakes that give birth without laying eggs leave their young to survive on their own. We’ll look at which snakes lay eggs, and which snakes give birth to live young. You’ll also find out how many babies snakes have each time.

Do Snakes Lay Eggs or Have Live Babies?

Snakes lay eggs and give birth, but it depends on the species. Around 70% of snakes are oviparous, meaning that they lay eggs.

“Oviparous” means egg-laying. Snakes that are born from eggs are by far the most common.

The female produces undeveloped egg cells, called ova, in her ovaries. After mating, some of these become fertilized.

The fertilized ova begin developing in the oviduct. A protective shell forms around the outside of the eggs, preparing them for the world. This shell is soft and feels like leather.

A yolk develops inside the egg, which will serve as the baby’s source of nutrients while it’s growing. While this is happening, the female is said to be “gravid” (pregnant).

Usually, the mother snake is gravid from anywhere between 4-6 weeks, although it does depend on species. She will then lay her eggs in a location which she deems secure. In the wild, it would be somewhere secluded, away from potential predators.

Once the eggs are laid, the babies start to grow inside their shells. After approximately two months (again, it’s species-dependent), the eggs will hatch. The babies cut a small hole in the egg using a specialized “egg tooth,” which eventually falls off.

Once the babies come out of their eggs, they are left on their own. Baby snakes are precocial, meaning that they can survive independently upon entering the world. They must start hunting straight away.

“Ovoviviparous” snakes produce eggs. However, these eggs stay within the mother until they are ready to hatch.

The reproductive cycle of ovoviviparous snakes starts in much the same way as oviparous snakes. The ova are fertilized and begin to develop inside the oviduct. They grow a protective shell, and a yolk from which the babies absorb nutrients.

However, the mother does not lay the eggs outside of her body for the babies to finish developing. She keeps them inside her until the babies are fully developed. The young snakes hatch out of their eggs while still inside their mother, and she then gives birth to them.

In ovoviviparous snakes, the babies do not receive nutrients directly from their mother via the placenta. The mother uses her body as a safe place for the babies to develop.

Consequently, ovoviviparous snakes are gravid for much longer than oviparous snakes. Some species can remain pregnant for up to five months before the babies hatch.

“Viviparous” means live-bearing. A small number of snake species are viviparous, which is very unusual for reptiles.

Once the ova are fertilized, they begin to develop. However, in viviparous snakes, there is no egg at all. Rather than growing inside eggs, the babies develop inside soft sacs, linked to a placenta via an umbilical cord.

During development, the babies receive nutrients from the placenta, the same way that mammalian babies do. In some viviparous snakes, a yolk sac is also present alongside the placenta.

When the babies are fully developed, the mother gives birth to them as ovoviviparous snakes do.

Because so many snake species fall into this category, we’ll focus on some of the most common pet snakes, and American wild snakes.

Rat snakes are a common type of snake found throughout the U.S. They are not one singular species, but all reproduce in the same way.

Two of the most common species of rat snake include corn snakes and black rat snakes (also known as black snakes).

In the wild, rat snakes mate in the spring, after they come out of brumation, which is the reptilian equivalent of hibernation.

The female is gravid for around 4-5 weeks. She then lays a clutch of around 12 to 20 eggs, which hatch around two months later. Rat snakes, like most oviparous snakes, abandon their eggs as soon as they lay them.

Kingsnakes and milk snakes are from the genus Lampropeltis. There are many species within the group, although they all have certain things in common. They are all native to the Americas and usually have distinctive colored bands. And, of course, they are all oviparous.

Most kingsnakes and milk snakes follow a similar mating pattern to rat snakes. They brumate in the winter and become active again in the spring.

They mate around May. Most species of milk snakes lay between 5 and 20 eggs per clutch, with an average of about 10. They lay their eggs about 6 weeks after mating, and the eggs take about 2 months to hatch.

There are 4 species in the genus Heterodon, but the most are Western and the Eastern hognose snakes. Known for their distinctive upturned “snout,” they are found across the US and northern Mexico.

Hognose snakes lay eggs. Like most other American snakes, they brumate over the winter months and mate in the spring. Western hognose snakes tend to mate slightly earlier in the spring than their Eastern cousins.

After being gravid for around 4 to 6 weeks, hognose snakes lay their eggs in the summer. They lay between 4 and 30 eggs per clutch, though Eastern hognoses tend to lay more than Westerns. The eggs hatch after 6 to 8 weeks.

Gopher snakes, genus Pituophis, are some of the most common snakes found in North America. They include bull snakes and pine snakes and are often mistaken for rattlesnakes, though they’re non-venomous.

Wild gopher snakes, again, mate in the spring. Gopher snakes are gravid for around 6-8 weeks. Depending on species, they may lay between 2 and 25 eggs at a time, though 12-14 tends to be the most common. The eggs will hatch in around 7 to 10 weeks, in the summertime.

Pythons are native to Africa, Asia, and Australia. Ball pythons, Burmese pythons, reticulated pythons, and carpet pythons are some of the most popular members of the Pythonidae family. Like most species of snake, pythons are also oviparous.

Most species of python do not brumate. This is because they come from warmer climates where the winters are not cold enough to necessitate this behavior. They tend to lay their eggs slightly earlier in the year than American species; around February to April.

The number of eggs varies by species. Ball pythons will lay between 3 to 13 eggs, whereas reticulated pythons can lay between 20 and 80 per clutch.

Can Snakes Have Eggs Without Mating?

Some species of snake, such as rattlesnakes, can store sperm inside their bodies for later use.

According to the Biological Journal of the Linnean Society, rattlesnakes may store it for up to 5 years. This would allow eggs to become fertilized without the snake having mated for a very long time.

Some species can produce viable eggs without having mated at all. An unfertilized egg, containing only the mother’s DNA, develops into a healthy baby snake. This is called parthenogenesis.

An example of a snake which reproduces this way is the Brahminy blind snake, a tiny snake native to Africa and Asia. Every member of the species is female, and babies are genetic clones of their mothers.

How Many Eggs Do Snakes Lay at One Time?

Usually, snakes will only lay one clutch of eggs per year. However, some species may lay two or even three clutches. How many eggs the snake lays per clutch will vary depending on the following:

Depending on all of the above factors, a clutch may consist of 2 eggs or 80 eggs. It’s typically somewhere in between (6 – 25).

Reticulated pythons tend to lay the most eggs at once, primarily due to their extreme size. An example of a snake which lays very few eggs at a time is the Sonoran coral snake. Clutches are usually 2-3 eggs.

Which Snakes Give Birth to Live Babies?

Around 30% of snakes give birth to live young. Some produce eggs and incubate them inside the body until they hatch. Others grow their young without the use of eggs, nourishing them through a placenta.

The rattlesnakes, found in abundance across the Americas, are ovoviviparous. They produce eggs, but they do not lay eggs.

Once the ova are fertilized, they pass from the ovaries into the oviducts, which are like long rather than laying them, they keep their eggs inside the body. This provides protection from predators and the cold.

Rattlesnakes are usually pregnant for around 3 – 5 months, giving birth in the late summer. When the babies are fully developed, they will begin to break out of their eggs, and the mother will give birth to them.

There are usually around 10 – 20 babies born at one time, though this varies by species. They are born encased in a very thin membrane which the babies soon break out of. The young stay with their mother in her den for just over a week, before heading into the world alone.

Copperhead snakes and water moccasins (cottonmouths) belong to the same genus, Akistrodon. Found in Southeast U.S., they are part of the same subfamily as rattlesnakes, pit vipers.

Therefore, they have similar reproductive systems. Like rattlesnakes, they are ovoviviparous, keeping hold of their eggs inside their bodies until they reach full term.

Copperheads and cottonmouths usually have fewer babies than rattlesnakes. Cottonmouths typically have 6-8 babies per litter, whereas copperheads have between 4 and 10.

You can identify baby copperheads and cottonmouths by their bright yellow-green tail tips, which they use to attract frogs by mimicking worms.

According to Biology Letters, copperheads and cottonmouths are two species of snake which can reproduce asexually, through parthenogenesis.

Garter snake babies grow inside their mothers, encased in a thin, cellular membrane, rather than a calcified eggshell.

A yolk is still present, but developing young receive most of their nutrients through a placenta, which is connected to the mother.

Between 3 and 80 baby snakes are born at a time. Baby garter snakes leave their mother as soon as they’re born.

Like garter snakes, boa constrictors are also viviparous. They are gravid for around 4 months, during which time the babies develop fully inside the mother’s oviducts.

The average litter size in boa constrictors is around 16, though they can have up to 50 babies at a time in rare circumstances.

The young are born inside very soft, transparent cellular membranes, which they break free from immediately. Some even manage to break out before they are born. The babies tend to stay together for a while before making their way into the world.