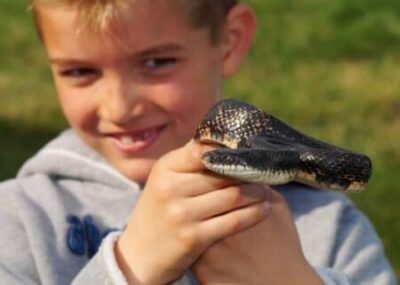 Owners claim that their snakes can recognize them, and behave differently around them than other people. This would only happen if snakes have a sensitive sense of smell, and if humans give off unique, recognizable scents.

Snakes recognize the scent of their owners from pheromones and sweat, and to a lesser extent, vision and hearing. They can distinguish the owner’s scent using their vomeronasal organ, which is tuned to sense pheromones. Snakes can remember this scent.

Contents show
1 How Do Snakes Recognize Their Human Owners?
1.1 What Is the Vomeronasal Organ?
1.1.1 Can Snakes Smell Fragrances?
1.2 Can Snakes Remember Your Scent?
1.3 Snakes and Memory
1.3.1 Episodic Memory in Snakes

How Do Snakes Recognize Their Human Owners?

Snakes use their sense of smell to navigate the world, find prey, and discover mates. All animals need senses to do these things, and the better the sense, the more likely the animal is to survive in the wild.

Snakes have a clear idea of what their prey ‘should’ smell like and will only eat things that smell like that. Snakes instantly know when they encounter one of these smells. By contrast, a snake’s vision is poor, and its sense of hearing is even worse. So, snakes rely on their sense of smell to survive.

This means that snakes can smell humans. All people give off scents through sweat, which contains salts (minerals) and pheromones. This is combined with the scent of body odor, which is produced by bacteria on the skin and in the hair. All of this produces a scent unique to each person.

Some people give off more scent, while others seem to not give off much. But that’s to the human nose, which isn’t as sensitive as that of a snake. Snakes can pick up these scents even when humans can’t.

Current Biology states that snakes have a ‘vomeronasal organ’, also known as Jacobson’s organ. This organ contains sensory cells that detect pheromones as well as other scents in the nearby area.

What Is the Vomeronasal Organ?

The vomeronasal organ is two small bulbs in the roof of a snake’s mouth. It isn’t connected to the snake’s nose, so it is separate from the snake’s regular sense of smell. It is open to the mouth through two small holes.

Snakes use this secondary nose by flicking their tongues and picking up pheromones/scents from the air. Each fork of the tongue pokes through one of the holes in the snake’s roof of its mouth.

The snake presses its tongue forks directly against the bulbs of the vomeronasal organ. So, this organ functions like both a nose and a tongue.

They can still use their normal nose in conjunction with the vomeronasal organ. But the two organs contain different kinds of sensory cells that are specialized for different scents. This is why a snake sniffs and flicks its tongue when in a new area.

Either way, this means that snakes can detect pheromones more easily than other animals. So, if owners give off pheromones, then their snakes will be able to detect them.

In addition, a person’s flora of bacteria is different from that of another person. It originates from what we eat, where we live, and what we do. This may also affect the unique scent of a person.

There may also be an element of your snake remembering what you look and sound like, but this is less clearly understood.

Perfumes and aftershaves, or the use of scented products like soaps, make you smell different. While a snake would normally pick up your bodily odor, it now smells something that’s completely different.

What often happens is that, over time, the snake associates these smells with you instead. If you consistently use the same kind of soap, for example, your snake could identify this smell with you in the same way that it would identify the smell of your sweat with you.

This is made more likely because you wash your hands before and after handling the snake.

Can Snakes Remember Your Scent?

This is a more difficult question to answer, because ‘remembering a scent’ requires two things:

While snakes clearly have a sensitive sense of smell, their memory isn’t an area of strength. A snake’s brain isn’t as well developed as that of humans. It’s smaller in relation to the snake’s body than the brains of more intelligent animals, and lacks key functional areas, like the cortex.

So, whether snakes can think back and recall things is uncertain. But they can definitely modify their behaviors based on past experiences, which is a form of memory. And this form of memory seems to last a long time.

The relevant form of memory to this issue is episodic memory. It relates to the events which happened to an animal. It encompasses the time at which something happened in relation to other events, where it happened, and what the animal felt or experienced.

Scientists are currently divided as to whether animals have this form of memory. Brain structure, which is different in reptiles, is less relevant than modification of behavior, which is the primary purpose of memory.

Others say that the reptile brain is too different from the human brain to perform the same functions. This debate hasn’t been settled either way, so scientists aren’t sure whether snakes can remember scent or not.

Episodic memory relates directly to behavior. Its purpose is to guide future behavior to ensure that an animal can survive and reproduce. So, if an animal experiences pain in a certain geographical location, it will ‘remember’ not to return.

It will then adjust its behavior based on how you act. So, if you’re threatening, then the snake will be defensive the next time you approach it. It will recognize that you’re approaching by sensing your smell. That’s just how snakes manage to survive in the wild. It’s an instinctual behavior.

Crucially, this initial impression will last a long time. If you’re initially cruel to a snake, it will learn to trust you much more slowly than it otherwise would have done. That applies even if you change your behavior later on.

The fact that this occurs suggests that snakes may have some form of episodic memory. But whether the snake is actively thinking back and recalling your scent, like we would recall a memory, is unproven. But a snake can differentiate between two different people based on smell.