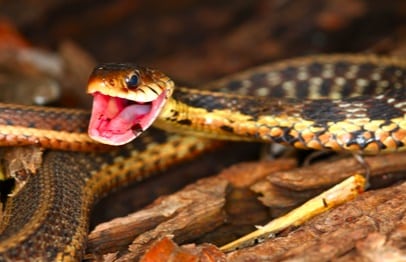 Garter snakes only grow to 2-4 feet long and are harmless, with a face that even seems to smile in a wide, fangless grin. This harmless reputation often comes along with the assumption that garter snakes not only don’t have fangs or teeth, but this isn’t actually the case.

Garter snakes have teeth that start out small in the front of the mouth and are longer in the back. These teeth have 3 tooth types that work together to ensnare and hold onto their prey. Their bite is slightly venomous, but only enough to slow down the small prey they hunt, like amphibians. Garter snake saliva occasionally causes a rare allergic reaction, but otherwise, their bite is not harmful to humans.

In addition to their teeth not looking like fangs, garter snakes have traits that set them apart from other species of snake, including immunity to toad toxins and a tendency to release a foul-smelling secretion when grabbed.

At first glance, a garter snake might not appear to have any teeth at all. These snakes lack the stereotypical large front fangs you might imagine when you think of snake teeth.

According to Herpetologica, not only do garter snakes have teeth, but these teeth come in distinct types based on their shape.

Along each tooth are a pair of dental ridges. These ridges are shorter in the front of the mouth and longer in the back. The dental ridges create sharp, prominent blade-like edges that slice down when the snake closes its jaw. These ridges help the teeth slice into the snake’s prey.

Venomous snakes use their bites to inject their prey with venom to slow them down and help with digestion. For a long time, people believed that garter snakes were not venomous. However, this is incorrect.

In an article in the New York Times by Dr. Bryan Fry of the University of Melbourne, it was stated that garter snakes actually have a small amount of venom, which they use to slow down their prey. Don’t worry as this venom is nowhere near enough to kill a human.

According to the Animal Diversity Web, a database run by the University of Michigan Museum of Zoology, humans will occasionally have an allergic reaction to garter snake venom or saliva. These reactions are very rare.

How Effective Are Garter Snake Teeth?

With such interesting teeth, what can a garter snake use them for? Do its teeth have any negatives? Let’s look more closely:

The three types of garter snake teeth work together to make it an effective predator. Combined with their quick reflexes, these sharp teeth allow garter snakes to swiftly immobilize their prey.

The snake’s slightly toxic venom also slows the prey animal down. This makes it easier for the garter snake to hold onto its prey while it swallows. Like most snakes, they swallow their prey whole. Garter snakes are carnivores, eating a wide variety of animals:

These teeth may serve the garter snake well when hunting prey smaller than it. However, garter snake teeth are not quite intimidating or effective enough to keep other predators off of their backs.

Garter snakes cannot count on their venom or bite to be enough to stave off an attacker. Instead, they have to depend on other tricks, such as stealth and camouflage. A wide variety of animals prey on garter snakes:

Humans have little reason to fear a bite from these snakes, besides a general caution against infection. This can lead to humans being bolder about approaching or roughly handling these snakes than they would about snakes with a more dangerous reputation.

Snakes with aglyphous teeth, such as the Burmese python, are usually non-venomous. These teeth are all very similar to each other in their size and shape, so there are no distinct fangs to be seen.

Here we find the garter snake teeth. Opisthoglyphous teeth are smaller in the front of the jaw and larger in the back.

The back teeth are also often grooved to allow for the channeling of venom into the snake’s prey. This means that the snake needs to move the prey to the back of its mouth in order to inject any venom.

Garter snakes have less potent venom than most other opisthoglyphous snakes, but their saliva is also toxic enough to slow down prey when it needs to.

These fangs are short, hollow, and downward-pointing. In order to inject the venom, the snake must keep a tight bite and hold onto its prey.

These teeth belong to snakes more dangerous to humans, such as the rattlesnake and other vipers. Solenoglyphous teeth include fangs which rest folded up against the roof of the snake’s mouth, ready to be brought down onto their prey at a moment’s notice.

Unlike other snakes that need to hold on tight to inject their prey, solenoglyphous teeth can inject large amounts of venom very quickly. This is what makes their bites so dangerous to humans.

Garter snakes are an adaptable species that can survive in a multitude of environments, from meadows and hillsides to woodlands and marshes.

Garter snakes depend on camouflage and other avoidance tactics to keep out of the way of predators. If grabbed, most snakes will try to strike at the hand that holds them in an attempt to scare away their attacker.

Garter snakes have another tool in their arsenal for getting out of a handhold. If grabbed, the garter snake will often release a foul-smelling musk. This smell is bad enough to scare away most animals and humans. These snakes also release urine and excrement at the same time.