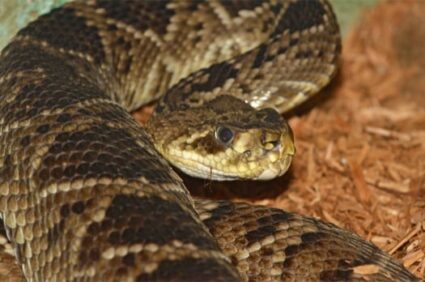 Few North American snakes are more feared than the eastern diamondback rattlesnake. They are infamous for their aggression and highly venomous bite. They warn humans to stay away with their tail-based rattle, a technique often mimicked by non-lethal snakes, such as colubrids.

Eastern diamondback rattlesnakes live in the southeastern United States. They are ambush predators that thrive in the underbrush. These rattlesnakes are known for their diamond scale patterning, their distinctive rattling sound, and venomous bite. They are not social snakes, only coming together to mate or fight over territory.

Eastern diamondbacks have many fascinating characteristics. Let’s take a look at what makes these species so interesting – from their eye-catching appearance, to their potent venom and iconic rattling sound.

Eastern diamondbacks are also known by the scientific name Crotalus adamanteus. These snakes get their name from the diamond pattern seen on their scales along the dorsal side of their bodies.

Like all other reptiles, they are ectotherms, relying on their external environment for temperature regulation.

All eastern diamondback rattlesnakes have the following features:

These rattlesnakes have keeled, pitted scales and bilateral symmetry. Along the dorsal side of their body, the snake’s scales form a diamond-like pattern. This design is unique among snakes and is the reason why eastern diamondbacks got their name – they have diamonds on their backs. Hatchlings already closely resemble full adults in their patterns and colors, making them easy to identify at any age or size.

Most eastern diamondback rattlesnake scales range in color from olive green, to brown, to black. On the inside of the diamonds, the scales are often tan, yellow, or blackish brown. On the ventral side of their body are yellow or tan scales. Near their tail, poorly-defined dark bands spread out before the rattle. You will also see two lines on the snake’s head, extending from the bottom of its eyes to the bottom of its jaw.

These scales allow the snakes to easily blend in with their underbrush homes. This helps the snake be an ambush predator for its prey, while also allowing it to avoid other animals which would mean it harm.

According to the Animal Diversity Web, eastern diamondbacks are from the southeastern United States. These snakes originate in the Coastal Plain region, which extends from the eastern part of Louisiana, through the coast of Florida, and up north to the southern part of North Carolina.

You can find them living in the underbrush. They prefer a temperate climate, in areas such as fields, flatlands, forests, or other grassy areas with plenty of low-growing plant life to hide under and find food in. They will often gather in areas where you can find a lot of game, because those are the more plentiful sources of food.

Eastern diamondbacks thrive at elevations of between sea level and 500 meters above sea level. Longleaf pine savannas were one the preferred home for these rattlesnakes. However, as that habitat has been destroyed over time, the population of eastern diamondbacks has declined.

The expansion of cities, roads, and farmland have further divided up rattlesnake territory, making it more difficult for eastern diamondback rattlesnakes to find the kind of environment in which they best thrive.

Eastern diamondbacks sit and wait in shady areas, usually the underbrush of their environment. They hunt their prey both during the day and at night, using infrared heat detection in low-light conditions. These snakes are very patient; they only need around 3-4 big meals each year, due to their low need for caloric intake.

Note that none of these predators are truly much of an issue for eastern diamondback rattlesnake numbers. The real threat to their population is humans, who kill these snakes for their meat or skins.

This rattle is used to warn predators of their presence. This rattle is made of hard, hollow segments that are loosely attached to the snake’s tail.

The snake rattles and hisses when it feels threatened, not because it wants to attack. Like other snakes, eastern diamondbacks prefer to avoid conflict with larger animals such as humans. This rattle can be moved back and forth more than 60 times each second.

Eastern diamondback rattlesnakes are born with the first section of their rattle. This first section looks a bit like a button. Every time the snake sheds, they gain a new section of their rattle with their new scales. The snakes shed around 3-4 times each year. You might assume that this means that the older the snake, the longer the rattle will be, but unfortunately, these rattles can break off frequently.

You may not expect it, but eastern diamondbacks can swim. When they do, they usually keep their rattle well above the surface of the water.

Eastern diamondback rattlesnakes are usually slow-moving snakes. However, they can rush ahead if they need to, in order to catch prey or evade a predator. When startled or threatened, the rattlesnake will coil up, elevate its head and neck into an S-shape, and rattle its tail.

These snakes usually crawl in a straight line, using rectilinear movement. This movement is often thought of as “creeping.” The snake uses some of its belly scales to firmly grip the ground, while other scales push the snake forward, creating an up and down body movement. These slow-moving snakes have specialized muscles that move their belly skin along.

Other snakes move in different ways than the eastern diamondback rattlesnake. For example, green tree pythons use the concertina method, stretching out the front end of their body and pulling the rear part forward to join it. This kind of movement allows them to climb high into trees.

Rattlesnakes that live in sandy desert conditions will use the sidewinding movement method instead. This kind of movement limits how much the snake’s body touches the ground, as it flings itself across a loose surface. There isn’t a lot for a snake’s scales to grip onto in a sandy desert, so this method works better for desert snakes than rectilinear creeping.

Eastern diamondback rattlesnakes are well-suited for rectilinear movement. Their forest and grassy environments give them plenty of solid objects on the ground for their scales to grip onto. As large snakes, they have the strong muscles required for this slow, methodical movement.

These rattlesnakes are known for their potent venom. This venom is a tool for hunting. The snake will wait for its prey to come by and then strike. After this, the snake will often wait for the prey to run away and die before it pursues to eat them. This venom is a kind of hemotoxin, which means that it destroys red blood cells in the victim.

Eastern diamondbacks have solenoglyphous fangs. This means that their long fangs are hinged and can fold back up into the mouth when not needed for a bite. These snakes have a tight grip and can quickly inject a large amount of venom. These bites are also extremely painful to humans, and can be fatal.

According to The New England Journal of Medicine, eastern diamondbacks are the most dangerous snake species to be bitten by. This is due to the large size of the snake, which means that the snake can inject large amounts of venom compared to other venomous snakes.

While around two thousand people in the United States are bitten by venomous snakes each year, eastern diamondback rattlesnake bites stand out as of particular note and concern.

In this study, researchers identified 123 unique toxin-coding sequences, including a common myotoxin related to crotamine. Knowing exactly what toxins are involved in rattlesnake venom helps doctors know how to treat these snake bites.

Eastern diamondback rattlesnakes can be milked for their venom. This venom is used to create an antivenom to save the lives of humans.

This process includes injecting the venom into large mammals, such as horses. Antivenom compounds can then be derived from the plasma in these mammals’ blood.

Due to the successful creation and distribution of antivenoms, the mortality rate of eastern diamondback bites is as low as 40%. However, a limb that is bitten is nearly always left permanently damaged by the venom.

These rattlesnakes have different mating periods depending on where they live. In the northern part of their habitat, this mating period is from early August to September. In the southern part of their habitat, including southern Florida, this mating period is from early October to December. Males will travel to find the females by following their trails of pheromones, and the females will stop moving around so much to be more easily found.

Eastern diamondbacks are ovoviviparous. This means that female snakes carry their eggs inside their body until they hatch. Carrying the eggs this way allows the mother to maintain the eggs’ temperature throughout their development.

Eastern diamondbacks have a longer gestation period than most other snakes, holding the eggs from 120 to 180 days. The eggs will usually hatch between July and October. If a female eastern diamondback rattlesnake is not in a good physical condition to give birth, she can hold a male’s semen in her body for up to five years before finally fertilizing her eggs.

These snakes do not participate much in raising their young. The male will leave immediately after mating. While the hatchlings will stay near the females at first, the females rarely interact with their young.

Usually, eastern diamondback hatchlings leave the place they were born between ten and twenty days after their birth. This is often after they first shed their skin.

Eastern diamondback rattlesnakes are not currently protected by the Endangered Species Act. However, animal activists have petitioned the United States Fish and Wildlife Service to add this species to the list, given how low their numbers have fallen.

These low numbers are due to being hunted for their beautiful skin, and also for climate change restricting these snakes’ territory to the southernmost parts of the Southeastern United States. Another factor is habitat fragmentation, which occurs when humans disrupt the snakes’ habitats with the expansion of farms, road networks, and cities.

Eastern diamondback rattlesnakes are an essential part of the environment. They keep down the populations of other animals that humans face as pests, such as rats and mice. While they are not yet considered an endangered species, it’s good to keep their decline in mind.

Some states, including South Carolina, are taking action ahead of the federal government. These states have listed the Eastern diamondback rattlesnake as a Species of Concern. The South Carolina Department of Natural Resources reports that they have been conducting studies to monitor the population of eastern diamondback rattlesnakes to determine if future action needs to be taken to protect these snakes.

We share our planet with many remarkable animals, and the eastern diamondback rattlesnake is among the most interesting.