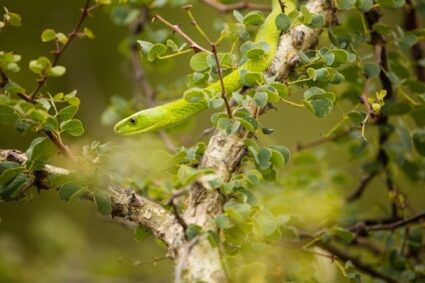 The eastern green mamba has an infamous reputation. It may prefer to avoid conflict, but if it decides to bite, the situation quickly turns deadly.

Eastern green mambas are arboreal snakes that live in coastal eastern Africa. They are solitary animals that do not travel around much, but can move at speeds up to 7 miles per hour. They mainly eat small mammals, birds, and bird eggs, though they have been observed eating arboreal lizards. Eastern green mambas are venomous and known for having one of the highest and quickest fatality rates for their bites.

What Is An Eastern Green Mamba?

Their scientific name “angusticeps” means “long narrow head” in Latin. This refers to the shape of the snake’s head. The head is shaped a bit like a coffin, with flat sides and a narrow, elongated shape. The head is distinct from the snake’s neck. It has dark, round pupils in medium-sized eyes.

Eastern green mambas have a very slender and slightly compressed body shape. Their tail tapers at the end and is relatively medium-length compared to other snakes. While they do not have a hood, they are able to flatten their neck area when threatened to imitate the hood of other venomous snakes.

Reptile enthusiasts often refer to this snake by other names, including the common mamba, the white-mouthed mamba, the East African green mamba, or just simply the green mamba. Eastern green mambas are the smallest of the four recognized mamba snake species.

Where Are Eastern Green Mambas From?

Eastern green mambas come from the tropical rainforests of eastern Africa. They are tree-dwelling animals that range from Kenya, through Tanzania, to South Africa. You will also find them in Mozambique, Eastern Zimbabwe, and Southern Malawi. The population in South Africa is genetically distinct from other eastern green mambas due to the community’s isolation from the other snakes.

These snakes usually live in coastal lowland areas. However, they have been found in locations further inland, such as the forests of eastern Zimbabwe and the Nyambeni forest in Kenya. All of these locations give them the tree-filled environments which these arboreal snakes call home.

You will also sometimes find eastern green mambas in thickets and farm trees, including citrus, mango, cashew, and coconut trees. People who live on the coast of East Africa have to be careful to watch for these snakes, which occasionally will enter houses or climb up to shelter in the thatched roof of a house.

While these snakes are mostly arboreal, they will on occasion come down to the ground. Usually, the snake comes down to hunt and feed on terrestrial animals. They will also come down in search of water sources, such as rivers. Eastern green mambas have also been seen basking in the sun on the ground, though this puts it in a vulnerable position to predators.

During the night, they will sleep in a tree. While they occasionally seek out the shelter of a tree hollow, this is rare. It is more common to find these snakes coiled up using a leafy clump as a bed. These snakes can remain sitting still in the same location for hours or even days at a time. They are an incredibly sedentary animal.

Juvenile eastern green mambas have a bluish-green color. As they shed their skin, they gradually transition into a brighter green color. This green color starts at the front of the body and, with subsequent shedding periods, the color proceeds to cover the entire body from head to tail. As an adult, their coloration ranges in shades of green, from lime green to a brilliant dark emerald.

There is some variation in color in these snakes’ eyes. Eastern green mambas may have a narrow bright ochre color on the border of their pupils, or a golden yellow edge to the eye. The lower border of the iris may also become bright green in older snakes. The inside of these snakes’ mouths are either white or a pale blue, to contrast with the dark black mouths of black mambas.

What Do Eastern Green Mambas Eat?

Juvenile eastern green mambas have been recorded to eat small lizards such as chameleons, likely because they were easier to catch. However, eastern green mambas will, on the whole, choose to hunt a fledgling bird, a mouse, or a rat over an amphibian, lizard, or snake.

Other mamba snakes, including the black mamba, have a typically wider diet with a greater variety of prey animals. The following animals are known prey of eastern green mambas:

How Do Eastern Green Mambas Hunt?

Eastern green mambas often come down from trees to hunt on the ground. Like most viper snakes, these snakes are ambush predators. They will sit and wait for their prey to come by before they attack, quickly and decisively. They will strike at their prey and then release it.

Eastern green mambas tend to focus on fledgling birds or eggs instead of adult birds, which are easier to hunt in their sedentary state, though these snakes have been known to strike at flying birds as well.

These snakes will not go down without a fight. When provoked, an eastern green mamba will lift up the front part of its body, flattening its neck into a narrow hood. This hood mimics the hood of other venomous snakes, such as cobras. Green mambas will sometimes gape their jaws and hiss at the perceived threat.

However, eastern green mambas are not as outwardly aggressive as other mamba snakes, such as the black mamba. These snakes are more prone to flee to the trees than fight back.

How Do Eastern Green Mambas Move?

Eastern green mambas move using a serpentine movement pattern. This is the stereotypical snake movement that involves making a wavy S-shape on the ground as they go. This kind of movement is also usually called undulatory locomotion or lateral undulation.

The snake will push itself off of an irregularity in a surface, such as rough tree bark or a dent in the ground, to move itself along. This kind of motion is perfect for the forest floor terrain an eastern green mamba is used to.

That doesn’t mean that you will usually see these snakes on the move. Eastern green mambas are notoriously sedentary animals, often only moving when they need to find food or a mate. On average, an eastern green mamba will only move around eighteen feet or 5.4 meters in a day.

However, eastern green mambas are fast-moving snakes. They are capable of slithering along at seven miles per hour. As a result, these snakes are more likely to depend on their speed to help them escape a threat, fleeing more often than they fight. They will head for the nearest tree and ascend it as quickly as they can to hide away among the branches and leaves.

Eastern green mambas are venomous snakes. They do not always strike with their fangs when threatened. However, if they are cornered and have no other way out, they can attack quickly and suddenly. These snakes have the ability to strike their prey multiple times in quick succession.

The repeated bites can lead to severe cases of envenomation. In particularly severe cases, death can occur in as little as 30 minutes’ time. This is due to the high toxicity level of the venom, relatively high among snake species. A hatchling eastern green mamba has as much venom at birth as an adult.

Eastern green mambas have long, solid teeth. These teeth include two enlarged venom fangs that are fixed to the front of the mouth, giving it a potent bite.

Eastern green mambas have a venom which is mainly neurotoxic. This means that the venom attacks the victim’s nervous system, blocking the chemical systems that the neurons send to each other. This causes muscles to become paralyzed, making it difficult to run away. It can even affect the lungs, inhibiting the victim’s ability to breathe.

The eastern green mamba’s venom toxicity varies from one individual snake to another. This variation is generally due to the geographical region the snake lives in and what prey it eats. Snakes which need to take down more hardy, dangerous prey are more likely to survive and reproduce if they have a higher toxicity level in their venom, causing natural selection.

Eastern green mambas do not enjoy living in the same space. In the wild, male snakes will often fight each other over territory and mating rights. In captivity, there have even been cases of cannibalism.

These snakes will come together to mate, however. The male eastern green mambas often travel far distances to find the female snakes.

How Do Eastern Green Mambas Reproduce?

During their mating period, the rainy season, is when you will find these snakes at their most active. The males will actively fight each other in a sort of ritual combat which can last for many hours.

The snakes do not bite each other, but they will attempt to force each other down to the ground in a sign of dominance. More successful male fighters are more likely to mate a female eastern green mamba.

The males will follow the females’ scent trail to mate with them. Courtship and mating practices take place in trees, as with most arboreal snakes.

Researchers at the Manyeleti Reptile Centre in South Africa report that in the wild, eastern green mambas will lay their white, elongated eggs in hollow logs, leaf litter, or among other decaying vegetation. The hatchlings are precocial, which means that they are active and mobile from the moment they come out of the eggs.

These snakes will grow quite a lot over their first year of life, often more than doubling their size. As they age, their rate of growth decreases. However, these snakes will never completely stop growing and may keep getting bigger as long as they live. Eastern green mambas have been known to live between fourteen and eighteen years.

A group of eastern green mambas is often called a “knot.” Other group names used are a nest, den, pit, or bed.

A baby eastern green mamba is called a “snakelet.”

When two male eastern green mambas fight during mating season, one male will initiate the fight by moving on top of the other’s body and flicking its tongue. Then the fight will begin. The fight ends when one snake manages to pin the other’s head down to the ground, like a wrestling match.

In 2016, an eastern green mamba snuck aboard a cargo ship and ended up in Britain, very far from home. The snake was found before it could hurt anyone. Unfortunately, due to a lack of facilities to care for the snake and a lack of available antivenom in Aberdeen, the snake was put down.

While eastern green mambas have an overall stable population, they still face threats from habitat destruction, such as deforestation. In South Africa especially, coastal housing developments severely break up the territory of eastern green mambas, making it harder for them to find food, mates, or densely vegetated areas to live in.