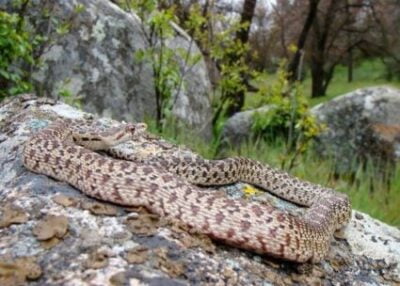 Gopher snakes are one of the most common wild snakes in North America. Various subspecies of gopher snake can be found throughout the western and central United States.

Gopher snakes are non-venomous constrictors that eat small mammals, birds, and lizards. They are one of the longest snakes in the U.S, with some subspecies reaching 8 feet. Gopher snakes hiss louder than any other snake, because they have a vocal cord. When threatened, gopher snakes can mimic the sound and appearance of a rattlesnake.

You may meet a gopher snake or two if you ever go hiking in the wilderness. Because they’re harmless and easy to care for in captivity, gopher snakes also make popular pets.

Gopher snakes can be found in deserts, woodlands, brushlands, and prairies across the U.S. If your house is near a forest or farmland, you might spot one in your yard.

Large and heavy-bodied, most gopher snakes are cream to tan in color with brown markings along their back. These may take the shape of saddles, spots or irregular blotches.

Gopher snakes are non-venomous, but have a highly evolved self-defense mechanism. Here are 10 interesting facts about gopher snakes.

Gopher snake is the common name for Pituophis catenifer (meaning “chain-bearing pine snake”). The term “gopher snake” can also be used to refer to other snakes in the genus Pituophis.

There are many different subspecies of gopher snakes. They all look slightly different, varying in color, pattern, and size. These are:

All gopher snakes are endemic to North America; they aren’t found anywhere else in the world. Which subspecies you’re likely to encounter depends on where you live. You might also call them bull snakes or pine snakes.

When you think of a constrictor snake, you might imagine a boa constrictor or a python. But gopher snakes are also a type of constrictor, in the Colubridae family.

Gopher snakes don’t have large fangs or venom. Instead, they kill their prey by squeezing them to death. They strike and bite to hold their prey still, and twist their body around it tightly.

Contrary to popular belief, constrictors like gopher snakes don’t asphyxiate their prey. According to the Journal of Experimental Biology, constriction forces the animal’s blood pressure to drop. Eventually, the blood can’t flow around the body, and the animal dies.

Gopher snakes are voracious predators. As their name suggests, they typically prey on gophers, which are their primary diet source.

But gopher snakes have a hugely varied diet. They eat a wide variety of rodents, including rats, mice, and young rabbits. They can also eat lizards, amphibians, and birds.

This means that gopher snakes are invaluable in agricultural areas. They help keep the rodent population under control, so that crops can flourish. They also help to balance the ecosystem.

However, gopher snakes also have a taste for chicken eggs. So, if you live on a farm, make sure your chicken coop is snake-proof.

Because gopher snakes don’t have any venom, they’re vulnerable to predators. But they have an effective defense mechanism to ward off animals that might want to eat them.

Gopher snakes have evolved to look like Western rattlesnakes, which inhabit many of the same areas. They have a thick body, heavily-keeled scales, and a similar sandy tan and brown coloration.

When attacked, a gopher snake will produce a threat display that mimics that of a rattlesnake. It will:

Humans often kill gopher snakes, mistaking them for rattlesnakes. But there are giveaways. Gopher snakes don’t have a rattle on the end of their tail. They also have round pupils, whereas a rattlesnake has slit-like pupils.

Loudest Hiss of Any Snake

Snakes hiss by forcing air out through an organ in their throat called the glottis. A small flap called the epiglottis vibrates, creating the hissing sound that we’re all familiar with.

But all snakes in the genus Pituophis, including gopher snakes, have an interesting biological adaptation. According to the Journal of Experimental Zoology, gopher snakes have a vocal cord. This allows them to produce a distinctive low rumbling noise when they hiss.

Because of this, a gopher snake’s hiss is louder than the hiss of any other snake. It’s thought that this helps them mimic the sound of a rattlesnake’s rattle.

Can Grow Up to 8 Feet Long

Gopher snakes typically grow between 4-6 feet as adults, but the size of each subspecies can vary.

The largest subspecies of gopher snake is the bull snake. Bull snakes can reach lengths of up to 8.5 feet, and weigh over 4 pounds.

This makes bull snakes one of the largest snakes native to the U.S. But even smaller subspecies, such as the Great Basin gopher snake, can reach over 5 feet in length.

Like most snakes, gopher snakes never stop growing. Their growth slows down when they reach adulthood, but they get bigger every year until they die. Pet gopher snakes must be kept in a vivarium that is at least 4 feet long.

Despite being native to North America, gopher snakes struggle to cope with our cold winters. They’re ectothermic (cold-blooded), so they rely on the sun’s heat to keep warm. During the cold months, gopher snakes huddle with other snakes and burn as little energy as possible.

This isn’t technically hibernation. It’s called brumation, which is the reptilian equivalent. While brumating, gopher snakes are still awake, but they move very little and don’t eat.

When the temperature starts to drop, gopher snakes seek out large underground dens called hibernacula. There, they brumate with hundreds of other snakes, including venomous rattlesnakes and copperheads.

Pet gopher snakes won’t go into brumation if you keep their vivarium between 75-85 degrees Fahrenheit.

Lay Up to 30 Eggs per Clutch

Gopher snakes are oviparous, meaning they lay eggs. A female gopher snake will breed in the spring, and she’ll be gravid (pregnant) for 65 – 75 days. She’ll then lay her eggs somewhere quiet and secluded.

Incredibly, gopher snakes can lay up to 30 healthy eggs per clutch (the average is 8). They may also lay some unfertilized eggs, called slugs, which won’t develop.

The reason gopher snakes lay so many eggs is because not all of them will survive. They may be eaten by predators, or succumb to adverse weather conditions.

According to Behavioral Ecology and Sociobiology, hatchlings that incubate at low temperatures can’t move as fast. They’re less likely to catch prey, and therefore may die of starvation.

Can Live for Over 30 Years

Gopher snakes have a surprisingly long life expectancy. The lifespan of a wild gopher snake is approximately 12 to 15 years. But in captivity, gopher snakes can live for over 30 years.

Gopher snakes live longer in captivity than in the wild because there are fewer threats and dangers. They have access to veterinary care and optimal living conditions. Wild gopher snakes rarely die of old age. Instead, they’re more likely to die from:

In captivity, these risks are greatly reduced. So if you kept a gopher snake as a pet, you could have a companion for several decades.

Because gopher snakes are harmless and easy to care for, they are considered ideal pet snakes. One subspecies, known as the bull snake (Pituophis catenifer sayi), is particularly popular.

If socialized from the moment they hatch, gopher snakes are confident and relaxed around humans. They tolerate handling well, and rarely bite. They are easy to feed, and will thrive on frozen-thawed rodents.

Being native to the U.S., gopher snakes also have easily achievable temperature and humidity requirements. For more information, take a look at our gopher snake care guide.