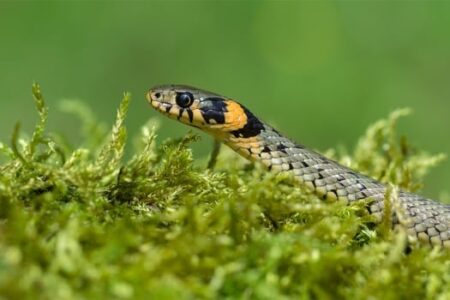 Grass snakes are found across Europe and Asia. They are a dark green or brown color all over. Their pattern includes a yellow collar around the neck and behind the head. The grass snake is 3 to 5 feet long and weighs about 240g. According to HAGR, grass snakes can live for up to 20 years.

Grass snakes require a 40-gallon tank. This is to accommodate them comfortably and allow for a temperature gradient. They need a basking area (80 degrees) and a cool spot (70 degrees). They dislike handling and frequently musk. They eat amphibians (frogs, toads, etc) in the wild, but can also live on small fish or a rodent-based diet.

In the U.K., where there is a large population, grass snakes (Natrix Helvetica) are protected by the Wildlife and Countryside Act 1981. They cannot be traded without a license, but can be captured and kept as pets.

Grass snakes aren’t commonly kept as pets in the USA. They’re more widely kept across Europe and Asia than they are in the United States.

Can You Handle Grass Snakes?

Grass snakes aren’t as friendly as other pet snake species, such as ball pythons and corn snakes. So, handling a wild-caught grass snake is unlikely to be a straightforward or enjoyable experience.

To handle a grass snake, you have to let it wrap around your hand/arm. If you don’t support it this way, it’ll feel unsafe and become stressed. However, most forms of handling tend to result in musking.

You will benefit from getting several items of equipment. These will enable you to handle the snake safely, and with a minimum of discomfort to your pet. The most crucial tools are snake hooks and tongs.

These allow you to grab or hook the snake to move it around. Hooks are especially useful for lifting the grass snake out of its enclosure. You will also benefit from owning a snake bag, which can be used for vet visits.

Everything else to do with snake handling is common sense. Don’t threaten the snake, and don’t handle your pet grass snake for too long.

Snakes need teeth to hold onto their prey. Grass snakes have two rows of teeth: one on top and one on the bottom. Each of these rows is split in two so that their jaws can expand outwards to eat large prey.

Their teeth are curved inwards. When a grass snake catches prey in its mouth, it won’t be able to escape easily. The teeth of a grass snake can’t be seen easily because they are concealed by its gums.

Grass snakes frequently need to bite in the wild. It’s the only way that they can subdue their prey as they don’t use venom or constriction.

However, they don’t frequently bite in self-defense. Instead, they will try to escape. If they can’t get away, they have 3 self-defense mechanisms:

If your grass snake does bite, wash the bite with soapy water and apply an antibacterial cream. Cover with a dressing. Monitor the bite by checking it each night and reapplying the salve. It’ll soon heal up.

That doesn’t mean that a grass snake’s bit is harmless. Snakes’ mouths are full of bacteria, and the area of broken skin can become infected.

What to Feed a Captive Grass Snake

Snakes don’t like eating dead prey because it feels unnatural. They eat live prey that they have killed themselves seconds before feeding. The smell, taste, texture, and temperature of frozen and thawed prey are completely different, so they don’t always recognize it as food.

The reason for these issues is that grass snakes are usually wild-caught and not bred in captivity. Any snake that is used to eating in the wild will struggle to adjust to life in captivity. This is true of all snake species.

The younger the snake is when you catch it, the less of an issue it will be. And if you buy a captive-bred grass snake, it won’t be an issue at all.

What Do Grass Snakes Eat?

Grass snakes survive on a diet of toads, frogs, newts, and lizards. Small fish and birds may also be consumed. Be sure to offer different food types. Just feeding your snake fish may lead to a thiamine (vitamin B1) deficiency.

The problem is that these food sources can be difficult to find. Sourcing these food types from the wild risks health problems because it’s not uncommon for wild-caught food to be infested with internal parasites.

Grass snakes don’t kill their food with venom or by using constriction. Unusually, they just swallow their prey alive.

How Often Should You Feed a Grass Snake?

Juveniles should be fed roughly every 3-4 days. If they do appear hungry long before their next feed, you may not be giving them enough food. If that’s the case, increase their portion sizes accordingly.

Adults feed less frequently than juveniles as their rate of growth and development has slowed. This is the case with all pet snake species. Adults may prefer feeding once every 7-14 days.

A grass snake must be kept separately in its own enclosure. This can be made of wood, plastic, or glass. Plastic is ideal as it’s affordable, easy to clean, and it holds onto moisture and humidity well.

The enclosure needs to be big enough for the snake to move around, but not so vulnerable that the snake feels vulnerable and exposed.

Snakes are reptiles, which means they’re cold-blooded. This means that snakes can’t regulate their temperature in the same way as mammals. Your grass snake will be dependent on its living environment to stay warm.

The enclosure should have a temperature gradient, which means that one end is warm and the other is cool. The warm end is called a basking spot, and is where the snake will go if it wants to warm up.

The basking spot should reach 80 degrees Fahrenheit. Grass snakes don’t come from warm parts of the world, so this temperature will suffice. The cooler end of the enclosure should range be 70 degrees.

These temperatures can be achieved in many ways. The most common is through the use of a heat mat. Heat mats sit underneath the enclosure. You can set them so that they only heat the tank to a specific temperature.

You could also use a heat lamp or even a light bulb (if you’re on a budget). These provide warmth from above, like the sun. However, the temperature is more difficult to monitor with these than it is with a heat mat.

Grass snakes live near fresh water, so humidity is vital to their health and wellbeing. The humidity level should be set between 50% and 70%. This is higher than many other species as they live near water.

An easy way to provide humidity to your grass snake is through a water bowl, but we recommend using a humidifier. You can monitor humidity levels using a tool called a hygrometer.

If the humidity level drops below what it ought to be, you can give the enclosure a quick spray with a misting bottle. Humidity is essential to all snakes, especially when a grass snake is shedding its skin (ecdysis).

Grass snakes have particular substrate requirements. The substrate or bedding is a material that you use to line the base of the enclosure.

Grass snakes need a substrate that works well in humid conditions. The best kinds are orchid bark, coconut husk beddings, and cypress mulch. Each of these substrates releases humidity at an optimal rate.

The grass snake’s enclosure shouldn’t be permitted to get too damp. If you allowed the snake to sit in a damp or wet substrate, due to the high humidity or urates, it would be at risk of developing scale rot.

A grass snake will need a water bowl to stay hydrated and to submerge itself into occasionally. This is essential for a species of snake that lives near water sources, such as woodlands and ponds.

Your snake may enter its bowl to rid itself of parasites, such as snake mites. Most snakes are able to spend 2-3 minutes submerged in water before drawing breath, which is longer than parasitic insects.

Snakes don’t like to feel over-exposed, hence the reason why they need two hides. A snake without a place where it can feel safe will become stressed.

Snake-safe plants, twigs, hollowed-out logs, etc. will all add to the realism, creating a more hospitable place for your pet snake to live in captivity.