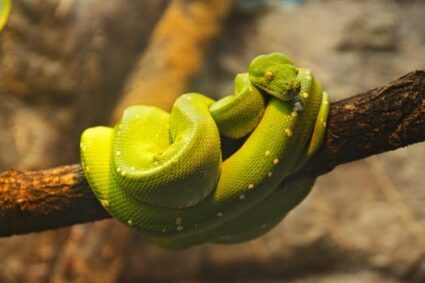 The most common type of green tree python in the U.S. is the Biak. They have vivid green bodies, interspersed with asymmetrical yellow splotches. Another favorite is Aru. These pythons have blue blotches along their backs and scattered clusters of white scales.

You may have heard green tree pythons referred to as “chondros.” This is a name stemming from their original taxonomic name, which used to be Chondropython viridis. Some breeders have begun to delve into the world of “designer” green tree pythons, but they’re still uncommon.

What Are Green Tree Pythons?

Most green tree pythons have a vivid, grass-green body, although it may be lighter or darker in color. Their dorsal color may be interspersed with markings of white, yellow, black, or blue.

Chondros are native to New Guinea, Indonesia, and extreme northern Australia. Like most snakes, their appearance varies depending on where it comes from. When we refer to a green tree python “morph,” we’re referring to their locality.

Technically, it’s incorrect to refer to localities as “morphs,” as they occur naturally. They aren’t a result of selective breeding. However, they are often colloquially called green tree python morphs.

What Is Ontogenetic Color Change?

All green tree pythons are green, at least partially. However, you may have seen photos of bright yellow or red-green tree pythons. Your eyes aren’t deceiving you as they are just juveniles.

Baby green tree pythons can be yellow, orange, or brick red. They have white or yellowish spots along their backs, outlined in brown.

When they’re between 6 and 24 months of age, they go through a process called ontogenetic color change. This transforms their scales into a classic green. Red babies turn orange and then yellow before going green, so their transition can take a little longer.

According to Biology Letters, this color change helps to camouflage these snakes in the wild. Adult green tree pythons spend more time in the forest canopy, among the green leaves. Babies, on the other hand, spend more time at the edge of the forest.

When getting a green tree python, be aware of this color change. If the snake is less than three years old, it may still change in appearance.

The localities you can find for sale in this country are all from Indonesia (or have been captive-bred in the U.S. from Indonesian heritage).

Biak green tree pythons are the most common type that you’ll find in the U.S. They are from eastern Indonesia, specifically the island of Biak. It’s located near the northern coast of the province of Papua.

Snakes from the Biak region (or descended from Biak pythons) are the largest of all green tree pythons. Their heads have an elongated appearance. They can reach lengths of 6 feet, if cared for well.

The temperament of biak chondros is well known. They tend to be the most feisty and defensive of all green tree python localities. That being said, many biak owners claim that they can be tamed with persistence.

Biak chondro babies can be either red or yellow. It can take up to 5 years to grow out of their baby colors. Adults can range from pale green to vivid green, and often retain a lot of yellow coloration into adulthood, in the form of asymmetrical splotches.

As Biaks are the most common, they tend to be the least expensive to buy. Babies can range between $275 and $350. Adults are more expensive, as is the case with all chondros.

Arus hail from the Aru Islands, which are in southeastern Indonesia. The population of green tree pythons on the Aru islands is the most isolated of all localities, and Arus are quite sought-after.

Arus have relatively short and blunt tails compared to all other green tree pythons, and their heads are short and bulky. Neonates are always yellow. As adults, they transform into a vivid emerald green.

They have flecks of pale blue throughout their bodies, and often a blue line bordering the stomach scales. They also have many clusters of large white scales, or small clusters of scales, down their spines.

Jayapura green tree pythons are found in the region of Jayapura, the capital city of the province of Papua. It is located on the northern border of New Guinea, in mainland Indonesia.

Rather than the city itself, Jayapura pythons come from the mountain ranges surrounding the area. The neighboring regions of Lereh, Arso, and Cyclops Mountain are also home to similar variations, although they aren’t nearly as popular as Jayapuras.

Jayapura neonates can be red or yellow. Red babies grow up to be a darker green. The yellow babies change to a pale olive-green or bluish-green.

They have a solid blue dorsal stripe down their spine, with blue markings on either side. Jayapuras often have sparsely dotted white scales. They can also have some black scales (melanism), though this is much rarer.

Jayapuras are one of the smaller green tree pythons. They’re also less likely to bite humans than Biaks and Arus, making them good pets for beginners. Baby Jayapuras range in price from $350 to $475 each.

Although the orange Sorong also exists, they’re quite rare. The vast majority of neonates from this locality are bright yellow. The babies typically have very dark brown dorsal stripes, which turn blue as adults.

Adult Sorongs that are green are lighter than most other localities. They’re closer to a lime green than the vivid grass-green.

They have a thin, unbroken blue dorsal stripe with blue triangle-shapes on either side. Sorongs have few white or yellow scales, if any. Their tails are long and pointed with black tips.

Baby Sorong green tree pythons sell for $350 – $500. The older they are, the more they cost as their adult colors begin to reveal themselves.

Manokwari green tree pythons also come from the Bird’s Head Peninsula. Manokwari is the name of a town on the northeastern coast of the peninsula. It’s also the capital of the province of West Papua.

However, their blue coloration tends to be much more vivid than Sorong pythons. The stripe tends to be thicker, too. They also often have randomly dotted white scales, whereas Sorongs don’t usually have any. Their tails are blue, darkening to black at the tip.

Wamena is the name of the capital town of the Jayawijaya Regency, in central Papua. It’s an urban area, so the name “Wamena green tree python” is a bit of a misnomer. There aren’t any green tree pythons from the Wamena region.

However, Wamena has a busy airport. When green tree pythons are collected from the surrounding mountain ranges, they’re exported from Wamena airport, hence the reason why they’re given the name Wamena.

As Wamena are from many areas, their appearance varies. They are usually a deep emerald green, sometimes with a blue undertone. They can have yellow or dark green patches, sometimes outlined in blue. Some Wamena chondros can have patches of black, too. Babies can be yellow or red.

Green tree pythons aren’t easy to look after in captivity. For this reason, green tree python morphs – that is, pythons that look a certain way due to selective breeding – aren’t widely available yet.

Some breeders have begun to experiment with “designer” chondros. As yet, their snakes are expensive and of limited availability. They create various looks by cross-breeding different localities together, selecting the snakes that express certain traits.

Mite phase green tree pythons have speckles and clusters of black scales on their bodies. The dotted black scales are reminiscent of mites.

Most mite phase green tree pythons lose a lot of their black scales with age, so it is one of the ways that you can determine how old a snake is.

High blue green tree pythons are created from breeding snakes with a lot of natural blue pigmentation (usually Jayapura specimens). They have blue bodies, ranging from teal to cornflower blue. They usually still retain some patches of green.

Many online images of “blue” green tree pythons are edited, to make the color appear stronger.

Similar to high blue, high yellow green tree pythons are bred from snakes that have a lot of yellow pigment. They’re usually bred from biaks, as these specimens usually contain the most yellow.

High yellow-green tree pythons still have many green scales. The amount will vary from snake to snake.

They are a beautiful deep golden yellow in color with yellow eyes and some scattered white scales. They’re the only type of green tree python that doesn’t feature any green.

Here’s our complete guide to caring for green tree pythons as pets.