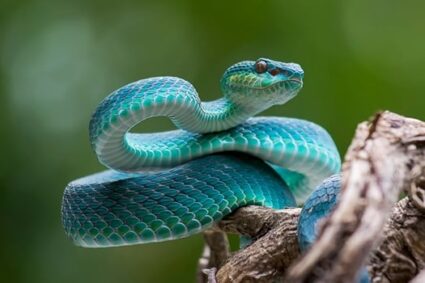 Venomous snakes use their lethal bites primarily to bring down prey. The question is often raised: how can snakes safely eat an animal that contains such a toxic substance? The answer lies not only with in-built immunities and tolerances, but in the chemistry of the venom itself.

As its most basic level, snake venom is comprised of proteins. These proteins are only destructive when absorbed into body tissues and introduced to the bloodstream. Stomach acid has evolved to be incredibly efficient at breaking down matter, including protein, which effectively neutralizes toxic substances like venom. Snakes have also developed mild immunities to their own venom, although scientists have yet to conclusively explain precisely how this happens.

As always, there are outliers. Certain species of snake have evolved immunities to the venom of other snake species, including those they are related to or actively hunt – which, in some cases, are one and the same.

Contents show
1 Are Snakes Immune To Their Own Poison?
1.1 What is Snake Venom?
1.2 How Could a Snake Self-Envenomate?
1.2.1 Exposure Through Ingestion
1.2.2 Self-Inflicted Bites
1.2.3 Bites from Other Snakes
1.3 How Immunity To Venom Develops
1.4 Why is Venom Immunity important?
1.5 Protection from Their Own Venom
1.5.1 Venom Glands
1.5.2 Dry Bites
1.5.3 Stomach Acid
1.6 Can Venomous Snakes Kill Non-Venomous Snakes?
1.7 Can One Species of Venomous Snake Kill Another?
1.7.1 Are Snakes Immune or Not Immune?

Are Snakes Immune To Their Own Poison?

Unfortunately, scientists have yet to conclusively answer this question. It is suggested that snakes naturally develop immunity over time. This ‘time’ includes both evolutionary time and the lifespan of the individual animal. Confusingly, it is also suggested that snakes aren’t actually immune to their own venom, but are instead resistant to it.

As shown in several cases, such as this one reported in Toxicon, snakes can still perish from their own venom depending on the severity of the envenomation. In this case, a Brown Tree Snake from Australia died from the potent neurotoxicity of its own venom. The snake, too, showed all the clinical signs symptomatic to the effects of brown tree snake venom.

The answer could well be a combination of both suggestions. Snakes are a broad-reaching group of animals that have diversified over millions of years, and each venomous species has evolved its own unique cocktail of toxins for bringing down prey.

Logically, this would include evolving a means of mitigating self-exposure to this deadly substance. It could also be due to developing resistances to such toxins, perhaps to the point where immunity is achieved. The possibility of venom immunity cannot be dismissed without conclusive evidence.

What is Snake Venom?

Snake venom is a highly-modified form of saliva and is classed as a zootoxin, a toxic substance (poison or venom) that is produced by animals. As said in the Journal of Venom Research, snake venom is a complex mix of proteins, enzymes, peptides, carbohydrates, lipids, metal ions, and organic compounds.

The exact quantities and combinations of these components vary greatly across the Serpentes suborder, leaving their chemical compositions wide and varied. This is also why there is no universal anti-venom for snake bites, or a single answer to the question. There are three main groups of snake venom. They are as follows:

Research has shown that some snakes change the chemistry of their venom as they age. In a study in Comparative Biochemistry and Physiology on the venom of brown snakes, researchers found that babies of the species had neurotoxic venom that would target the nervous system, whereas the venom of adults would coagulate the blood.

Venom is, beyond its chemistry, a weapon used by snakes for hunting and, occasionally, defensive purposes.

How Could a Snake Self-Envenomate?

There are a number of ways a snake could potentially self-envenomate. They are as follows:

Although an unlikely scenario, a snake could potentially self-envenomate by eating prey that was also envenomated – either by the snake itself or another venomous snake.

As said previously, protein-based venoms are broken down in the stomach and rendered harmless. However, the venom could still enter the bloodstream of the animal if the snake was injured internally.

An injury could be as small as a scrape on the inside of the mouth or throat; should any venom on the surface of the injection site of the prey come into contact with this injury, the snake could self-envenomate.

In this scenario, the risk to the snake would also depend on two factors: the amount of venom exposed to the snake, and whether or not the venom that killed the prey was the snake’s own.

There are recorded cases of snakes biting themselves. These instances are largely attributed to the snake misjudging its bite, either due to a split-second error or the snake being while shedding and unable to see properly, and striking itself rather than its target.

Snakes can decide whether or not to inject venom once they have landed a bite. However, even with the incredible reaction speeds that snakes have, mistakes can be made. Thus, snakes can accidently self-envenomate through this means.

Bites from Other Snakes

In nature, anything can happen. This includes snakes biting and actively hunting one and other, although this latter event typically only occurs regularly with a select few species, such as the Kingsnake.

Snakes can also bite each other out of conflict. This can occur during mating season, largely between males battling for mating rites, or out of competition for food or territory. Few species of snake, like the Garter Snake, can peacefully cohabitate with others, and thus such clashes are not uncommon.

How Immunity To Venom Develops

Immunities develop through mild and repeated exposures. Snakes are likely exposed to mild doses of their own venom throughout their lives, allowing their immune systems to create antibodies that subdue the harmful qualities of venom. This is similar to the process and composition of the anti-venoms that humans develop.

Scientists have found that certain snakes do carry antibodies to their own venom, and at times the venom of other species. Kingsnakes have been found to be so effectively resistant to the venom of certain pit vipers, such as rattlesnakes and cottonmouth snakes, that they are effectively immune.

However, researchers have also discovered that Kingsnakes are born with this immunity, meaning that this evolved over time and not through exposure.

It is important to remember that a venom immunity begins as a venom resistance. Over the lifetime of an animal, this resistance develops into an immunity, which may be passed on to future generations. The potential cases for self-envenomation outlined above are instances where snakes might be repeatedly exposed to the venom of their own species.

Why is Venom Immunity important?

Snakes have evolved to produce and deliver some of the most toxic substances on earth. It stands to reason that they would need to develop some form of resistance or immunity to their own venom, especially so when the primary purpose of their venom is to incapacitate prey. It would be pointless for snakes to develop such a mechanism for disabling prey if they themselves could so easily fall to it.

Venom immunity is also an important trait to have from an evolutionary standpoint. For a species to evolve and withstand changing climates, food chains, and competition, it must compete in the ‘arms race’ that constantly occurs in nature. As venom continuously evolves to effectively bring down prey, which may also be building its own venom immunity, so too must the snake evolve to be tolerant of its ever-changing chemical weaponry.

Protection from Their Own Venom

Snakes protect themselves from their own venom in a variety of ways beyond developing resistances and immunities.

Venom glands have developed to be secure pockets for producing and storing venom. Much like how our own stomach contains the destructive digestive juices that break down our food, venom glands have evolved to contain venom and prevent it from contaminating a snake’s bloodstream.

A dry bite is when a snake lands a bite but chooses to not inject venom. Snakes have complete control over their venom glands. This allows them to control precisely how much, if any, venom they inject into a victim. In cases where a snake mistakenly bites itself, they are able to prevent self-envenomation.

The main way snakes protect themselves from their own venom, beyond antibodies, is through stomach acid.

All venom is protein-based, and stomach acid has evolved to be incredibly efficient at breaking down protein. Thus, a snake’s digestive system breaks down its venom, rendering it harmless before it can enter the bloodstream. In this way, snakes protect themselves from being self-envenomated quite effectively.

Snakes aren’t the only animals capable of safely ingesting venom. There are many animals, including Red-Tailed Hawks, Mongooses, and Honey Badgers, that maintain snakes as a regular part of their diet. These predators will eat a snake, down to the last scale, and suffer no ill effects from ingesting the venom.

As outlined in Toxicology in Antiquity, historically, humans have safely used snake venom for hunting game as well.

In short, yes. King Cobras are named for their habit of killing and eating other snakes, including nonvenomous pythons.

The situation can be reversed as well. Nonvenomous snakes can, and do, kill venomous snakes. Kingsnakes are non-venomous and kill their prey through constriction. A common component of their diet are pit vipers, the venom of which Kingsnakes have a true immunity to.

Can One Species of Venomous Snake Kill Another?

A toxic substance is just that regardless. It is entirely possible for a snake to be envenomed, and killed, by another venomous snake. This is evidenced by the King Cobra, which will prey upon other cobras. The lethality of a venomous bite between snakes depends on multiple factors, including:

Are Snakes Immune or Not Immune?

Snakes on a whole are not so much immune to their own venom as they are tolerant, or resistant, to it. Research has shown that snakes carry antibodies, their own form of anti-venom, which will neutralize venom that enters the bloodstream, although the effectiveness of these antibodies against high quantities of venom is unclear.

Regardless of tolerance, snakes have also evolved effective venom production and delivery systems that safeguard against accidental self-envenomation. This includes the chemistry of the venom itself, which can be rendered harmless as it is digested and broken down in the stomach’s digestive fluids.

MLA Style: Carter, Lou. "How Are Snakes Immune to Their Own Venom?" Snakes For Pets, (January 21, 2021), https://www.snakesforpets.com/how-are-snakes-immune-to-their-own-venom/.

APA Style: Carter, L. (January 21, 2021). How Are Snakes Immune to Their Own Venom?. Snakes For Pets. Retrieved January 21, 2021, from https://www.snakesforpets.com/how-are-snakes-immune-to-their-own-venom/