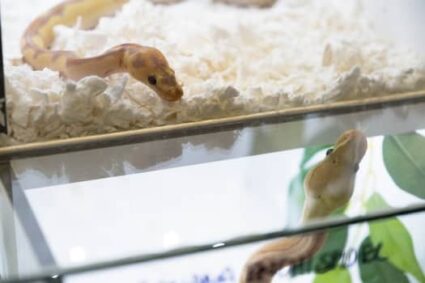 There are 3,000+ species of snakes in the world. Snakes come in a wide range of shapes, sizes, colors, and temperaments, depending on their species. Unsurprisingly, the baby versions, regardless of whether they are live young or hatch out of an egg, are all different.

We’ll look at the size of baby snakes, covering the most common wild and captive species. We’ll discuss how each snake is born, their average size at birth, and what they look like.

What Size Is a Baby Snake?

Without having the snake professionally examined by a herpetologist, the easiest way to determine a snake’s age is based on its size.

Some snakes are oviparous, meaning that they hatch from eggs. Others, like garter snakes, are viviparous, giving birth to their young. But no matter how a baby snake enters the world, hatchlings are always going to be significantly smaller than adult snakes.

Length And Weight of Baby Snakes

A baby reticulated python would look like a giant if you placed it next to a newly-hatched hognose snake, despite being the same age.

Ball pythons are only found in sub-Saharan Africa. They’re docile, gentle-natured, and stay relatively small throughout their lives.

Female ball pythons are gravid for a month before laying about 6-12 eggs. They usually mate in the spring, but can lay eggs year-round in captivity. Female ball pythons protect their eggs until they hatch. After almost 2 months, ball python hatchlings emerge.

They look exactly like their adult counterparts in terms of shape and color. They are born with the characteristic pits along their top lips, used to sense the body heat of prey.

Corn snakes are a species of rat snake, in the genus Pantherophis. They’re related to black, grey, and yellow rat snakes. Endemic to North America, wild corn snakes can be found in the southeastern United States.

Corn snakes breed in the spring, and lay 10-30 eggs in May or June. When she’s finished laying, the mother vacates the nest, leaving the eggs alone.

Hatchling corns are 10-15 inches long. Their bodies are light and thin, weighing 6-8 grams.

Baby corn snakes have the same body shape as adults. However, they lack most of their orange pigmentation, appearing grey between their dull red saddles. As they age, they become brighter and their colors more vivid.

Kingsnakes are colubrids, like corn snakes, though they belong to a different genus – Lampropeltis. They get their name from their eating habits – they eat other snakes.

There are several different species. The most common are the California kingsnake, eastern kingsnake, and scarlet kingsnake.

All kingsnakes are endemic to North America. California kingsnakes can be found along the west coast. Eastern and scarlet kingsnakes reside in the eastern half of the U.S.

Kingsnakes breed in the spring, after coming out of brumation. Like most colubrids, the mother abandons her eggs after laying them. A clutch contains between 3 and 13 eggs on average.

Each baby kingsnake measures between 8 and 11 inches long, weighing 9 – 14 grams.

This may vary depending on the species. Hatchlings look very similar to adults, with the same pattern, coloration, and body shape.

Milk snakes are closely related to kingsnakes. They’re part of the same genus, Lampropeltis. There are many subspecies of milk snake. Most of them have red, black and white (or yellow) bands. They can be found across most of the U.S. and some parts of Canada.

Milk snakes lay their eggs in the summer months, after mating in the spring. They lay around 3 to 15 eggs at a time. The mother leaves the eggs after laying them.

When baby milk snakes hatch, they are 5-10 inches long, weighing between 4 and 8 grams.

The babies resemble the adults in terms of color, pattern and body shape. Some, like the eastern milk snake, are slightly less colorful than adults.

Yearling milk snakes can reach between 15 and 40 inches long and weigh up to 500 grams.

There are 3 species of hognose snake in the US: western, eastern, southern and Mexican hognoses. They’re all small, with an upturned nose and keeled scales. Hognose snakes often lay large clutches, of up to 40 eggs at a time.

They’re born with the characteristic “snout,” and brown spots along their backs. Because of their keeled scales, baby hognoses are often mistaken for rattlesnakes. They’ll even vibrate their tails if they feel threatened.

Boa constrictors are native to South America. They grow up to 13 feet long, and are non-venomous, constrictor snakes.

Boas are viviparous: they give birth to live young. The babies develop fully inside the mother, emerging when they’re ready to fend for themselves.

Up to 60 babies can be born at once, usually between April and August (South America’s dry season). Newborn boa constrictors are born in a thin, transparent sac, which they soon break out of.

Baby boas are born with their adult coloration and body shape. After a year, boas can reach up to 50 inches long, and weigh up to 1000 grams.

Garter snakes are among the most common wild snakes in the U.S. They often appear in people’s yards, hunting bugs, lizards, and rodents.

There are many species of garter snake. Most are dark in color with at least one light-colored longitudinal stripe running down their back. Like boa constrictors, garter snakes give birth to live young. Some species may have as many as 80 babies at once.

Baby garter snakes are 6 to 9 inches long and weigh between 1.5 and 4 grams.

Even as adults, garter snakes rarely weigh more than 150g. They average from 16 to 35 inches when fully grown.

Gopher snakes are non-venomous colubrids, but have evolved to mimic dangerous rattlesnakes. Gopher snakes can vibrate their tails and widen their heads to appear more triangular when threatened.

Gopher snakes breed in the spring. They lay between 2 and 26 eggs per clutch, which hatch after around two months.

They closely resemble adults in color – cream to tan, with dark brown saddles along their backs, and spots along their sides.

Reticulated pythons are among the world’s largest snakes. They are endemic to South and Southeast Asia.

Because the females are so large, they lay the most eggs of any snake species – up to 80 at a time. They take almost 3 months to hatch, and are independent the moment they’re born.

Reticulated python hatchlings are 24 to 30 inches long, weighing between 110 and 170 grams.

They hatch with their distinct net-like pattern, which is where they get their name. At just 1 year old, retics can be between 70 and 118 inches long (almost 10 feet). Fully grown, they can reach lengths of up to 30 feet.

Copperheads are pit vipers, closely related to water moccasins. They are a type of venomous snake that can be found across the eastern U.S. Copperheads give birth to up to 20 live babies at one time.

Baby copperheads have the same hourglass-shaped bands as their adult counterparts. However, their colors are different. Baby copperhead colors become brighter and more coppery as they age.

Baby copperheads have a fluorescent yellow-green tail tip, which they lose as adults. This is called a “caudal lure.” According to the British Ecological Society, they wiggle their brightly-colored tails to attract frogs and lizards.

Adult copperhead snakes can reach 24 to 26 inches in length and weigh up to 340 grams. Baby copperheads are more likely to envenomate than adults as they haven’t yet learned to moderate the use of their venom.

The size of baby snakes is species-dependent. For example, the babies of a reticulated python will be significantly bigger than adult snakes, such as hognose snakes. Most baby snakes resemble their adult counterparts.

MLA Style: Carter, Lou. “How Big Are Baby Snakes When They Are Born? (With Video)” Snakes For Pets, (March 8, 2020), https://www.snakesforpets.com/how-big-are-baby-snakes-when-they-are-born/.

APA Style: Carter, L. (March 8, 2020). How Big Are Baby Snakes When They Are Born? (With Video). Rabbit Care Tips. Retrieved July 6, 2022, from https://www.snakesforpets.com/how-big-are-baby-snakes-when-they-are-born/