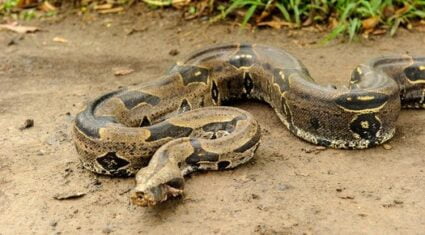 The boa constrictor is one of the longest snakes in the world, but is much shorter than anacondas and reticulated pythons. According to the University of Michigan, the biggest boa ever found measured 13 feet long.

The size of a boa constrictor depends on age and sex. Newborn boas are an average of 14 to 22 inches and weigh 2 ounces. Adult boas average between 6.5 and 9.8 feet in length and weigh in excess of 100 pounds. Female boas are usually larger than male boas in terms of length, width, and weight due to sexual dimorphism.

Interestingly, the tail size of the typical male boa is proportionately longer than the female. This is due to the room taken up by the male’s hemipenes. Let’s explore some interesting boa constrictor size facts in more detail.

How Fast Do Boa Constrictors Grow?

Boa constrictors grow very fast. Most boas reach full maturity after just three years, but continue to grow in size throughout their entire life. The more food that they eat, the bigger they will grow.

Baby boas are an average of between 14 to 22 inches in length, and are born into a litter of around 60 snakes.

They are a species of snakes that produce live births. This means a baby boa is fully formed at birth (not eggs) and starts feeding shortly afterwards, allowing it to grow in weight and length at a rapid rate.

Within seven months, depending on the sub-species, a baby boa can reach 3 feet or more, and weigh up to 30 pounds.

It’ll feed on small mammals, such as small rats and adult mice, or other animals, such as birds and lizards. At this stage, the boa will need to feed every 10 to 14 days.

A boa is likely to be close to maturity by the end of its third year, growing to an average length of 6-8 feet, depending on its sex. A boa can also weigh up to 60 pounds.

Although your boa has matured at this point, it can still continue to grow, sometimes reaching a length of 10-13 feet, and weighing up to 80 pounds.

The tail of the male boa is larger, based on its shorter size. This is due to the size of the hemipenes, which are used to prevent the hemipenis from coming free from the females’ cloaca.

On average, red-tailed boas grow up to the following lengths:

They weigh around 13 pounds, with females again being larger than males.

Here’s some information on the differences between the red-tailed boa and boa constrictor imperator.

How Big Can a Dwarf Boa Get?

Dwarf boas are one of the smaller boa subspecies, again with females being longer than males, on average.

The largest dwarf boa to be recorded was close to 30 inches long.

Why Are Boas So Big?

Boa constrictors are modestly-sized compared to the enormous Burmese python or reticulated python.

Boas have healthy appetites, and their size and weight are dependent on where they live and the availability of food.

They constrict their prey using powerful muscles, which stops the blood flow to vital organs. Once the animal is dead, the boa ingests its prey whole, taking six days to digest its entire meal.

Because of this fast process, boas can consume copious amounts of food, allowing them to grow much larger than most species of snakes.

The size of a boa constrictor depends on its subspecies. Smaller subspecies, such as common boas rarely outgrow red-tailed boas.

Will Over-Feeding a Boa Make It Grow Faster?

The growth of your boa depends on its diet. The more that you feed a boa constrictor, the larger it will grow. It’s the same as any other mammal or living creature in that regard.

When overfed, boas will become obese. This is very common among snake keepers who continue to power feed their boas to gain size and mass.

An excessive feeding routine, especially when combined with a lack of activity due to the snake being in a captive environment, can cause health issues that severely shorten the life expectancy of the snake. Boa constrictors normally live for 20-30 years.

Other complications associated with overfeeding include stress and excessive shedding. Snakes need to shed their skin to accommodate their increasing size and mass. So, a growing snakes sheds its skin more often.

What is the Biggest Boa Constrictor?

The largest non-stretched dry skin of a boa measures 14.6 feet without the head, according to Frank Glaw and Michael Franzen.

Contrary to popular belief, the biggest boa constrictor ever found was not 18 feet long. It was discovered to be a misidentified green anaconda.

Boa constrictors are very large snakes in terms of average length, width, and weight. However, they’re nowhere near as big as Burmese pythons, anacondas, and reticulated pythons (retics).