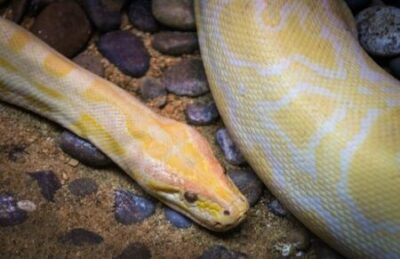 You want to learn everything that you can about your pet snake. One thing that’s a little more difficult to figure out is exactly how old a snake is.

The two ways to age a snake are its length and weight. However, these vary based on the species of snake. Other indicators of old age include changes in pattern and color, and a larger head and body size.

We’ve listed the average weight and length of each species as hatchlings, juveniles, and adults. We’ve also gone into more detail about how to assess what head size, pattern, and color can tell you about a snake’s age.

How Old Is My Snake?

You can estimate a snake’s age reasonably accurately by measuring its length and weight. Because snakes grow so fast, you can figure out whether a snake is a year old (juvenile) or an adult (older than three).

Because snakes never stop growing as they age, you can estimate how old they are based on how much longer they are than a regular adult snake.

How Old Is My Ball Python?

After they hatch, the average length of male and female ball pythons is 10 to 16 inches. The weight of both males and females is between 65 and 100g. At a year old, ball pythons are about twice the length, and perhaps 7 to 8 times their hatchling weight.

This is where females start getting longer than males. Males should measure between 30 and 40 inches and 500-800g. Females should be between 30 and 50 inches, and weigh between 500 and 1000g. The males have longer tails, according to the Royal Society.

How Old Is My Corn Snake?

After they hatch, the average length of male and female corn snakes is 10 to 15 inches. The weight of both males and females is between 6 and 8g.

Corn snakes are one of the few species where the male is longer than the female when they’re adults. That’s mostly because of the tail—the female’s tail is short and squat.

How Old Is My King Snake?

After they hatch, the average length of both male and female kingsnakes is between 8 and 11 inches. They are quite light, only weighing between 9 and 14g immediately after hatching.

At a year old, they should have tripled in length to between 24 and 30 inches. They should also be much heavier, having gained enough weight to reach between 250g and 300g. That applies to both males and females.

How Old Is My Milk Snake?

After they hatch, the average length of the male and female is between 5 and 10 inches. They’re light after hatching, only weighing between 4 and 8g.

Milk snakes are variable in both length and weight, which makes them more difficult than most snakes to age correctly. At a year old, a milk snake should be somewhere between 15 and 40 inches. They should weigh between 100g and 500g.

Adult male and female milk snakes don’t differ in terms of weight or length. They should be between 20 and 60 inches, and weigh between 300 and 1300g. The variance is due to the different subspecies of milk snake. So, the best way to accurately age a milk snake is to speak to a vet or breeder.

How Old Is My Rat Snake?

After they hatch, the average length of male and female rat snakes is about 13 inches. Males tend to be a little longer than females, but not by much.

However, they’re not much heavier than other hatchling snakes despite being longer, only weighing between 9 and 13g (both males and females). Juveniles grow to about 20-40 inches at a year old and weigh anywhere from 30 to 100g.

As adults, the size depends on the species. However, rat snakes are most commonly between 50 and 70 inches in length. The longer species can reach 10 feet.

It’s important that you identify the species exactly before attempting to guess how old they are, based on their length. They will most likely weigh between 500g and 1kg.

How Old Is My Garter Snake?

After they hatch, the average length of both male and female garter snakes is between 4 and 5 inches. They can weigh as little as 1 to 3g.

Females should weigh about 250 grams, but it’s not unheard of for them to weigh quite a bit more than that. Males will weigh between 100 and 150g.

How Old Is My Adult Snake?

Once they reach adulthood, the snake’s growth slows down quite a lot. But unlike humans, snakes will carry on growing until they die. So, if a snake is significantly longer than a regular adult, then they’re likely quite a bit older. However, because snakes do naturally vary in size, this isn’t the best way to guess the age of an adult snake.

The main way that snakes change as they age is that their pattern changes. Ball pythons are a good example. It’s a different story depending on the morph, but many morphs become duller as they age. In others, the pattern becomes clearer.

Find out how the pattern of your snake’s morph changes as it ages and you can make a better assessment. Not only that, but as they age, a snake’s head and core body keep growing, too. The bigger the head and ribcage compared to an average specimen, the older the snake.

How to Accurately Age a Snake

It’s difficult to age a snake as they’re different from other types of pets. Other common pets might get the odd gray hair, for example, and they might move less than they used to. It’s obvious that they’re old, but it’s impossible to say whether they’re 15 years old or 17 years old.

The same goes for snakes. As they grow older, their pattern does fade, and their physiology will change. But it will never be drastic enough a change for you to be able to age them to more than within a few years.

The exception is with wild-caught snakes. Wild snakes show their age much more than captive ones. They typically show signs that they’ve been around the block a few times, such as scratches and scars along their sides, from brushes with predators.

They may also have broken and kinked tails, again from run-ins with predators that tried to kill them. Wild snakes also have a rough upper limit on their lifespan, which is much lower than captive snakes. Each of these factors can enable you to accurately age a wild snake.

That’s because the various signs—like length, weight, head size, body size, and pattern—are familiar to them through years of work. If you own the one snake, you won’t have had that same experience.